Sealift shopping season off to slow start due to pandemic response

“Usually March break and Easter is when everybody comes down to do their shop. We haven’t had a soul.” 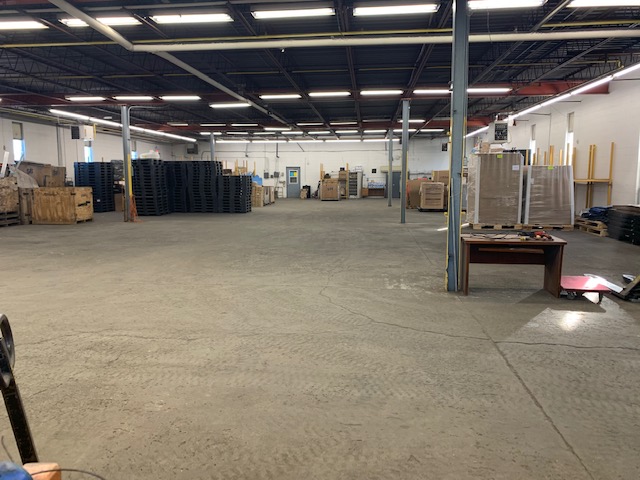 This TSC Moving and Storage warehouse outside Ottawa would normally be full of goods from stores like Walmart, Costco and Leon’s bound for the eastern Arctic during the upcoming sealift season. But this year, due to the ongoing pandemic, it sits empty. (Photo courtesy of Kevin Bridge)

At this time last year, the TSC Moving and Storage warehouse on the outskirts of Ottawa was full of goods waiting to be shipped to the eastern Arctic during the annual sealift resupply.

This year, because of pandemic-related measures like travel restrictions, it’s empty.

“I don’t have any sealift as far as this year’s concerned,” said TSC’s owner, Kevin Bridge.

“I’m optimistic that I’m going to get slammed when it comes, but I don’t know when that is and how it’s going to happen.”

As COVID-19 spread, so did the measures implemented to slow its progress.

By March 23 all non-essential travel into Nunavut was prohibited, and Nunavummiut in the south wanting to return home had to spend two weeks quarantined in hotels in cities such as Ottawa or Winnipeg before being allowed to do so.

This is also the time when many of the territory’s residents would normally fly south for vacations, often stopping along the way to do their annual sealift purchasing.

“Usually March break and Easter is when everybody comes down to do their shop,” said Bridge.

Typically, Bridge brings on additional help for the season in early March, something he also did this year.

Less than a month later he was forced to lay off three of those individuals, including one he’s been working with for close to 20 years.

Bridge isn’t the only one in that position.

What Pelletier has seen, however, is a slight shift in another of the services they offer, online ordering.

“These requests are earlier this season than usual because most of the people are in shutdown or working from home,” said Pelletier, who estimates that they’re about 10 per cent busier than they would normally be at this time of year.

Despite this, Pelletier acknowledges that the effects of the pandemic have otherwise been negative, with other parts of the business being down by 40 per cent, including shipments to restaurants and food deliveries as part of the federal government’s Nutrition North program.

While this hasn’t resulted in layoffs, it has delayed both the hiring of seasonal workers who would typically help with the upcoming season and the opening of their crating facility, though Pelletier hopes that it will be ready to go as early as the first week of May.

For Northern Shopper, which provides another online shopping option for those in the North, the pandemic is also causing problems.

“What we do is fill orders through stores for people,” said Patrick Watson, sealift coordinator for Northern Shopper.

“Right now, we can’t get into stores.”

For the safety of Northern Shopper staff, they’ve suspended in-person shopping, which means some services, including their popular Costco orders, aren’t going to be completed in time for the first sealift of the season.

While Northern Shopper isn’t able to go into stores, there are workarounds.

“We’re asking our clients to order online and ship to our warehouse for furtherance to their address,” said Watson.

Northern Shopper is also in the process of developing a line of products by the case for both their air and sealift cargo.

“Instead of a 32 pack of Costco Coca Cola, for instance, we’ll be selling 24 packs that we bring in through wholesale vendors,” said Watson.

Similar to TSC, the ripple effect of the pandemic has forced Northern Shopper to lay off four workers and delay the hiring of three others.

“That’s about 25 per cent of our core crew,” said Watson.

“Labour means that we’re busy, so we hope to be busy again as soon as possible, but it just can’t happen under this climate.”

Watson’s other concern, and one shared by the other companies, involves the availability of certain goods, particularly flour, toilet paper or cleaning supplies.

“We ship pallets, if not sea containers, full of toilet paper on an annual basis,” said Watson.

Currently, due to demand, that’s not something they can do.

Instead of pallets worth of toilet paper being prorated by vendors, they may offer six cases this week and six cases the following week, says Watson.

“It totally disrupts the way a traditional sealift is done,” said Watson.

For one Northern Shopper customer who operates a commercial cleaning business, a typical one-off order has been replaced by a weekly orders.

“He can’t get the 10 pallets of gloves that he needs,” said Watson.

“He’s only able to get 10 cases at a time, so he’s got to order every single week to get that stock so that he can do his business next year.”

Like many orders, this means that those gloves are destined for a later sealift, which could cause capacity issues on those vessels.

For Pelletier, another possibility, though an unlikely one, is that the shortage of available items may cause higher prices if customers have to fly their goods north instead of using the sealift.

“We have a lot of time in front of us and there are a bunch of suppliers who can provide such goods so I do not believe this can happen,” said Pelletier in an email.

Even if this was the case, Nutrition North recently extended its subsidy to products such as toilet paper and hand sanitizer, so a portion of the potential extra air-freight cost is covered.

But to avoid any other potential uncertainties, Pelletier’s advice to customers echoes that of sealift operators: to maximize the chances of getting everything you want on board, plan in advance.

“The sooner the better.”