Senate committee passes UNDRIP bill, but not without push-back

“Speak up on behalf of the Indigenous peoples of Canada,” Makivik urges Nunavut senator 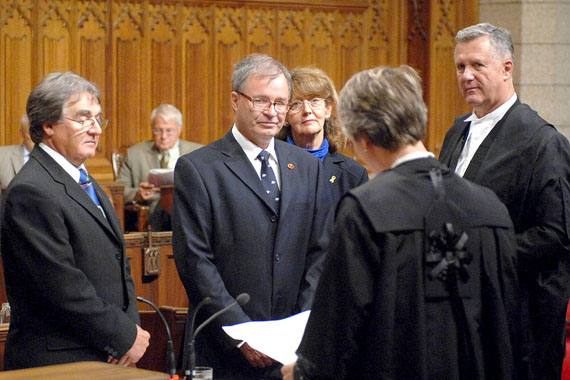 Dennis Patterson takes his oath of office in the Senate chamber on Sept. 15, 2009, as then-Senator Charlie Watt, left, looks on. Watt, now president of Makivik Corp., is calling on Patterson to support Bill C-262. (File photo)

The Senate Committee on Aboriginal Peoples has passed a bill to implement the United Nations Declaration on the Rights of Indigenous Peoples in Canada.

The committee finally voted June 11 to carry Bill C-262, a private member’s bill sponsored by NDP MP Romeo Saganash and passed in the House of Commons last year, which calls for Canada’s laws to be harmonized with UNDRIP.

But this month’s review came with push-back from Conservative senators, who raised concerns the new legislation would give Indigenous groups a veto over natural resources projects.

During Tuesday’s clause-by-clause review of the bill, Nunavut Senator Dennis Patterson proposed a number of amendments, one of which would require the government to direct questions about the legislation’s veto power to the Supreme Court of Canada.

Patterson said there was a lack of clarity on how the legislation would apply in Canada and called the process to pass the bill rushed.

It took the UN 24 years to pass UNDRIP and Senator Sinclair expects the Senate APPA committee to deal with it in less than 24 days. https://t.co/xlfdkvhuPW

Later, Patterson raised a question of privilege, saying the limited time allocation for debate around his proposed amendments constituted a breach. He recommended that the bill be sent back to the committee. The speaker has yet to rule on that question.

Though the bill ultimately was passed, the approach of Patterson and other Conservative Senators angered a number of Indigenous leaders and groups.

Makivik Corp. president Charlie Watt penned a letter to Patterson last week, asking him to support the legislation, as a representative of Inuit.

“Now I am asking you, Mr. Senator, to speak up on behalf of the Indigenous peoples of Canada to ensure that Bill C-262, known as the UNDRIP Bill, receives proper consideration in Committee, and subsequently Royal Assent in the Senate of Canada,” Watt asked Nunavut Senator Dennis Patterson in his June 7 letter.

“I encourage you to discuss this with your fellow Senators and reverse the trend and push the bill to a speedy passage.”

Watt goes on to explain Nunavik’s vested interest in seeing the UNDRIP implemented, as the region explores the possibility of self-government.

Though the Canadian Constitution has recognized Aboriginal rights since 1982, Watt said the federal government needs a mechanism to pool legislation to support the needs of its Indigenous groups.

“We need clarity on all sides, regular Canadians and its first peoples with the Canadian Government in the centre,” Watt wrote. “That mechanism is Bill C-262, at least it’s a start and its timing is good.”

UNDRIP was first passed by the UN’s general assembly in 2007.

The declaration recognizes the basic human rights of Indigenous peoples, including rights to self-determination, lands and languages, though it’s not a legally binding document.

The bill now goes back to the Senate chamber for a final legislative debate and vote.