Inuit Tapiriit Kanatami president agrees: “There isn’t the urgency to do the actual work” 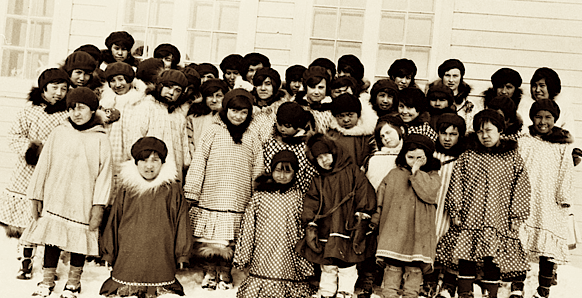 Students at the All Saints residential school in Aklavik, Northwest Territories, operated by the Anglican church, pose for a photo in 1940. The three members of the Truth and Reconciliation Commission want governments to do more to carry out the TRC’s calls to action, which were released in 2015. (Anglican Church of Canada General Synod Archives)

“There isn’t the urgency to do the actual work,” he said.

“There might have been the urgency to talk … and to hold meetings, but now we’re getting into system change.”

It’s “very concerning” the federal government does not have a clear plan to implement the TRC’s calls to action and has not followed through with its commitment to create a National Council for Reconciliation, said Sen. Murray Sinclair, chair of the TRC, in a statement released on Tuesday, Dec. 15.

The TRC investigated the impacts of residential schools in Canada. Nearly 7,000 survivors came forward to share stories of abuse and the lasting effects it had on their families, languages, cultures and communities. 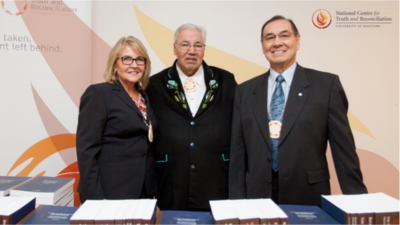 The Truth and Reconciliation commissioners gathered Dec. 15, on the fifth anniversary of the final report’s release, to call for a renewed sense of urgency in meeting their 94 calls to action. From left: Marie Wilson, Chief Wilton Littlechild and Sen. Murray Sinclair. (Photo from the National Centre for Truth and Reconciliation)

Prime Minister Justin Trudeau said in a statement that 80 per cent of the 94 calls to action in the report, created to bring justice to survivors of residential schools across Canada, are “complete or well underway.”

Obed said there is truth in both statements, but “it’s very simplistic to just put the TRC into percentage points” and “that is not something that ever is going to appeal to residential school survivors.”

The commissioners said progress in implementing the United Nations Declaration on the Rights of Indigenous Peoples, which was tabled recently, has been slow.

Obed said the bill is a positive sign, but “it’s very unfortunate that we live in a country where certain jurisdictions still find a problem with recognizing, respecting and then implementing our human rights.”

Six provinces have asked the federal government to delay the bill.

“I am most disheartened that Alberta, the province that had the highest number of residential schools in Canada, is leading these attempts at delays,” said Commissioner Wilton Littlechild.

The commissioners noted some signs of progress since the final report was released:

Some provinces have incorporated the history of residential schools into school curriculum, but the commissioners decried political rollbacks on this progress in Alberta and Ontario.

“All governments need to do more to ensure that survivors can see real and meaningful progress in their lifetimes,” said Sinclair.

Obed agrees. He thinks progress in areas like education, policing and violence against women hasn’t been prioritized as much as it should be.

“It hurts and I would imagine people are still quite angry about that,” he said.