Bags of breakfast are now being given out in three locations 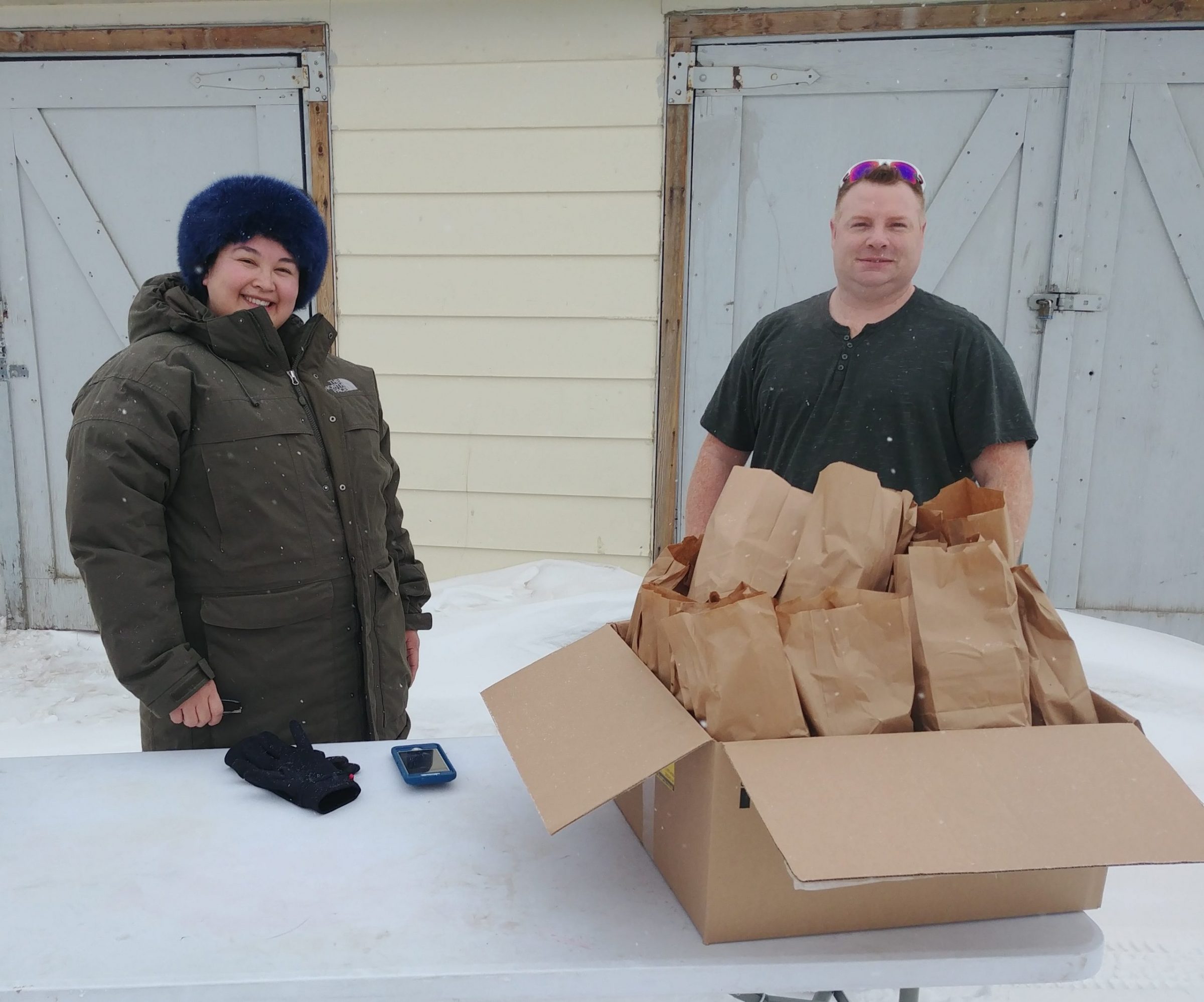 Jason Rochon and Neevee Wilkins are seen here ready to give out bags of breakfast behind DJ Specialities. Volunteers are now giving out breakfast at two other locations, outside Joamie school and in Apex. (Photo by Meagan Deuling)

The teacher who started giving out bagged breakfasts in Iqaluit last week is “swamped”—with volunteers, donations, and people who need the food.

Jason Rochon is a teacher at Joamie Ilinniarvik School in Iqaluit. He and three fellow teachers started to give out paper bags filled with breakfast food late last week.

They started at the back of DJ Specialities convenience store, giving out 200 bags between 9 a.m. and 10 a.m.

Now, Rochon has a roster of 20 volunteers scheduled to work in rotation—six per day, with three handing out food behind DJ Specialities and three at the parking lot of Joamie school.

Rochon is also packing up 25 bags a day for children in Apex.

June Shappa, the chair of the Apex DEA, said that each morning a different member of the DEA will take a turn to pick up the bags and deliver them to households in the community.

“We know there’s a need,” Shappa said. “It means the world to us to be able to do this.”

Rochon said that on Monday they only gave out 17 bags at Joamie school, while on Tuesday they gave out 44. He hopes more people come on Wednesday, when they start to hear that bagged breakfasts are available there.

When word started to get out that Rochon and his friends were doing this last week, people started to volunteer and to donate money. So far he’s received over $7,000, and it keeps rolling in.

Mona Godin-Bayne, a co-owner of DJ Specialities, is fielding the donations for Rochon, as well as ordering food for the breakfasts at cost through the store.

On Tuesday morning, Rochon said that Steve Sullivan, the manager of the Frobisher Inn and the Storehouse Bar and Grill, pulled up in a van in the parking lot of DJ Specialities when Rochon and others were giving out breakfasts to drop off donations of cereal, fruit and other food.

Rochon said people from three communities in Nunavut have called him to ask for advice on how to get funds together to start their own breakfast or lunch programs while school’s out.

The Government of Nunavut closed all schools in the territory on March 17 because of COVID-19. Initially the closure was going to be re-evaluated three weeks after that date, on April 7. But in its daily COVID-19 update, the GN said on Monday, March 30, that schools will likely be closed for at least another two more weeks after April 7.

Rochon said he hears from the people who pick up bags of breakfast how badly the food is needed.

The GN says it’s also looking into ways to fill the gap left by the school lunch programs that provide food to students.