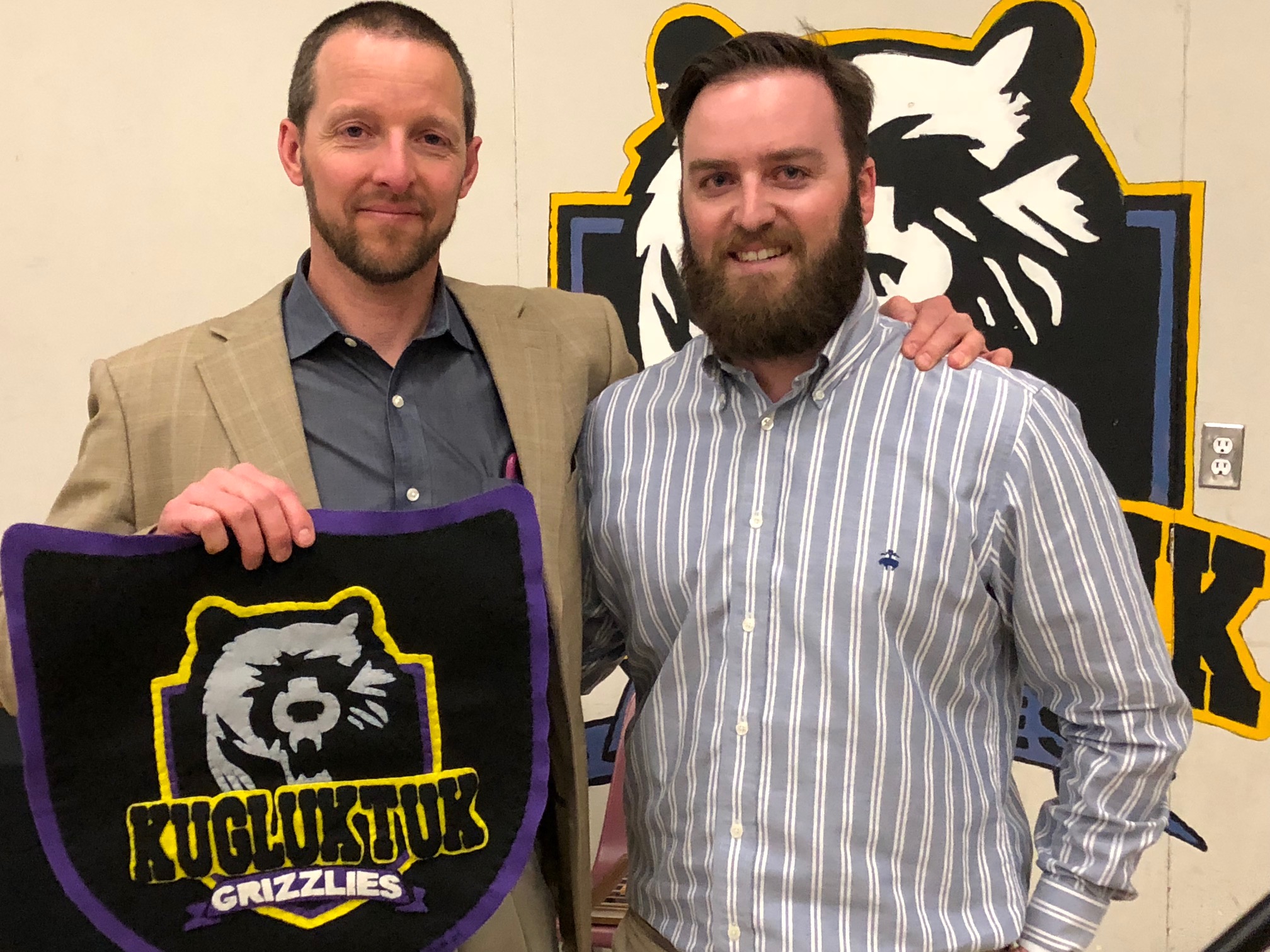 Outgoing Kugluktuk High School principal Haydn George (left) stands with his vice-principal, Jonathan Lee, who gave a tribute to George on June 5. That’s after the district education authority, with Kitikmeot School Operations, decided not to renew George’s contract to stay on for another three years in the western Nunavut community. (Submitted photo)

Kugluktuk’s high school gym was filled to capacity on June 5 as students and residents gathered to say goodbye to the school’s popular principal, Haydn George.

Over the past few weeks, many in the western town of Kugluktuk had clung to the hope that their local district education authority and the Kitikmeot School Operations would offer another contact to George.

Initially, the DEA members had decided not to renew George’s third contract offer. Then, after complaints from residents, he was interviewed again for the position, but, in the end, his position went to a new hire.

So George, who had led the high school for six years, left the community of about 1,500 this week.

Some in Kugluktuk continue to allege that, in its decision not to offer a new contract to George, the DEA didn’t follow the rules of the current Education Act and didn’t disclose what had happened during their private meetings to the public.

The dispute over George, which started to gather momentum in May, also came up during the spring sitting of the Nunavut legislature, when Kugluktuk MLA Mila Kamingoak spoke on May 31 about the uproar among her constituents and tabled a petition signed by 130, asking for George to remain as principal.

“A number of Kugluktuk community residents were very upset to note that the high school principal position was recently advertised,” Kamingoak said in a member’s statement.

“Many residents felt strongly that the current principal should stay in the job. Following that, it became common knowledge that a number of teachers would be leaving the community at the end of the school year, prompting more concern.”

Kamingoak said she hoped that discussions about Nunavut’s education system and the new Education Act would bring “greater clarity regarding the roles, responsibilities, and expectations of community district education authorities with respect to staffing in our schools.”

In responding to her questions, Education Minister David Joanasie admitted “this situation in Kugluktuk is a case where we do want to clarify our roles between the DEAs and the department on the reappointment of principals or vice-principals.”

Joanasie said his department recommended to the regional school operations that they move ahead with the competition for the principal’s position, and “we went with that and this is in line with our current legislation.”

But some in Kugluktuk say the Department of Education did not follow its own regulations in the process to determine the fate of George.

Proposed changes to Nunavut’s Education Act, found in Bill 25, tabled last week, put the DEAs more in charge of the community programs than education programs, which may result in changes to the DEAs’ role in hiring principals or vice-principals.

Bill 25, which has yet to be discussed by MLAs in the standing committee on legislation, would require DEAs to appoint members to the hiring panel within two working days.

So, on June 5, many in Kugluktuk came to say goodbye to George. The gym of the school, which was recently featured in the acclaimed movie, the Grizzlies, was packed.

The gym in Kugluktuk’s high school was filled to capacity on June 5 as students and residents gathered to say goodbye to their principal, Haydn George. (Submitted photo)

George’s vice-principal, Jonathan Lee, presented him with a Grizzlies banner. Lee spoke about George who could often be found welding, snow shovelling, “inviting the whole community into the school for lunch, giving out so much fruit that he literally found a weekly chartered plane from Yellowknife, or (sending) a quick text offering some hummus he’s just made, if you have a container.”

This was all part of George’s effort, made possible with the help of donors, to attract and retain hungry students and to build a stronger relationship with the community.

“Haydn offers sincere love and compassion…. These attributes are not sourced from a teaching manual … they come from his heart,” Lee said.

Last week, the high school under George’s leadership was praised in the auditor general’s report on education for its trades courses, which combine hands-on skills with academic studies.

One of the school’s students, Shauntay Bolt, summed up George simply: “the students in your next school will be incredibly lucky to have a leader like you.”