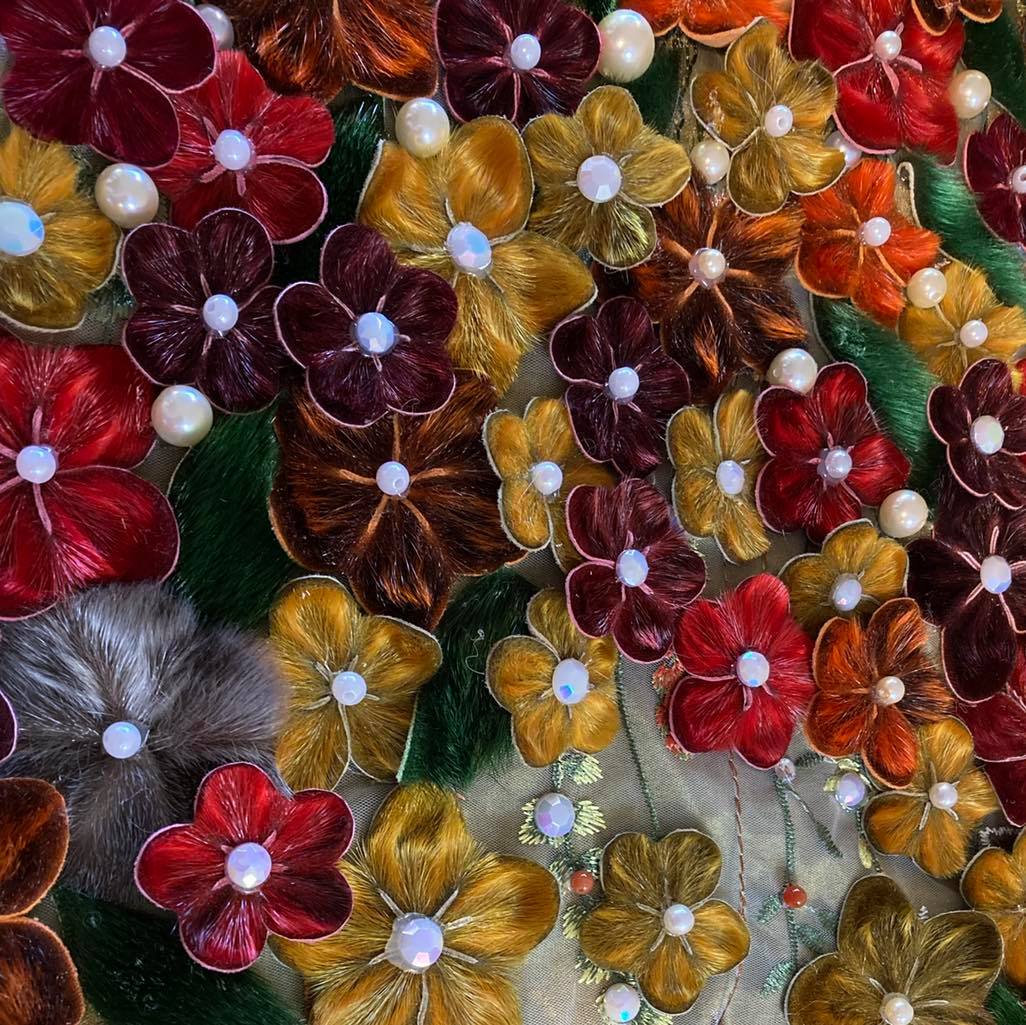 This floral sealskin creation by Ottawa-based designer Martha Kyak is among the works that will eventually be on display at the inaugural exhibition of the Qaumajuq Inuit Centre at the Winnipeg Art Gallery. (Photo courtesy of Martha Kyak/Facebook)

In a world without COVID-19, you would soon be able to visit the Qaumajuq, the Inuit Centre at the Winnipeg Art Gallery, today and admire the plush multi-coloured floral sealskin dress crafted by Ottawa-based designer Martha Kyak.

But instead of celebrating its grand opening, the art gallery temporarily closed to the public on Nov. 2 as the number of cases of the new coronavirus surged in the city.

Closing ⁦@wag_ca⁩ just as we began transferring thousands of Inuit carvings to Qaumajuq. But they’ll all be there for you when we reopen. Stay safe. pic.twitter.com/ByRiDNXeOq

The gallery had just chosen the new Inuktut name for the centre in late October: Qaumajuq, which translates as “it is bright” or “it is lit,” a nod to the light that flows into the new building.

But like many events scheduled to take place during this pandemic, Qaumajuq’s grand opening has been postponed to 2021.

At 3,716 square metres—covering more area than two professional hockey rinks—the gallery’s white granite building will house the largest public collection of contemporary Inuit art in the world, with much of that collection coming from Nunavut.

The centre, which cost $65 million to build, is 98 per cent done, said its Director and CEO, Stephen Borys, during a recent online event, which also featured architect Michael Maltzan, and Heather Igloliorte, an Inuk scholar and associate professor at Montreal’s Concordia University, who is also the gallery’s lead curator for its opening exhibit.

That exhibit is called Inuit Nunangat Ungammuaktuk Atautikkut (Inuit Moving Forward Together) or INUA, which also means spirit, or life force, “a concept used throughout the circumpolar world which conveys how the centre is celebrating Inuit,” the gallery said in a backgrounder.

Among the objects slated for display are 15 commissions and 15 loans as well as works from the gallery’s 13,000-piece collection of Inuit art and from the Government of Nunavut’s fine-art collection.

For the exhibit, Isuma Production Inc.’s Zach Kunuk has built a recreation of his family’s hunting cabin which will provide visitors 360-degree visual experience, Igloliorte said.

Inside are dolls made by the late Elisapie Inukpuk of Inukjuak and a brightly painted sidecar made by the acclaimed Ivujivik artist Mattiusi Iyaituk and Étienne Guay, a Quebec sculptor known for his metal creations.

The sidecar, which features antlers as well as a mermaid-like tail, is called “Iqaluullamiluuq (The first mermaid) that can maneuver on land.”

The exhibition will also include works by artist Jesse Tungilik, known as the creator of the sealskin spacesuit, and more wearable art by Nunavik’s Beatrice Deer and Julie Grenier.

“It’s genre-crossing work,” Igloliorte said of these various works that will be part of INUA.

The team working on the opening includes Jocelyn Piirainen, the assistant curator of Inuit art at the gallery, who is originally from Cambridge Bay, and, as exhibition designer, Nicole Luke of Rankin Inlet and Chesterfield Inlet from the University of Manitoba’s department of architecture.

Beginning with the opening of Qaumajuq (tentatively scheduled for February 2021,) admission to the gallery will be free to all Indigenous people.

Igloliorte said she hopes Qaumajuq becomes a place that people can appreciate, and, above all, a place to celebrate Inuit culture.

“Sometimes Inuit art is not in the front,” she said. “Inuit art needs to celebrated on the scale as any other art tradition, honouring it as a world tradition,” adding it’s an “incredible legacy.”