“We’re not out to slaughter bears” 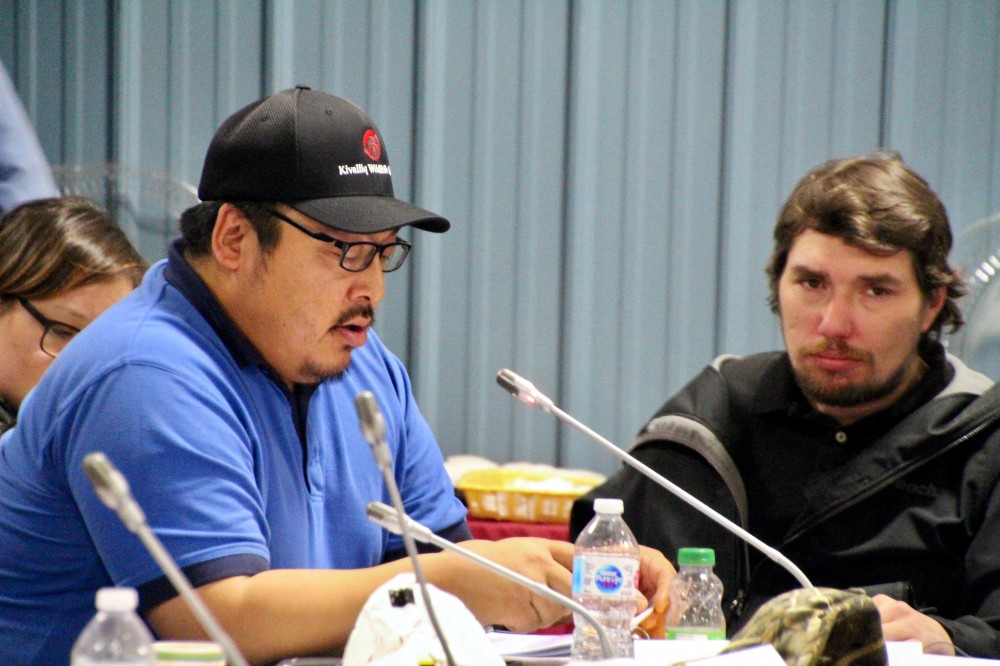 “What’s more valuable, a cabin, a snowmobile, or a human life?” Kivalliq Wildlife Board Vice-Chair Richard Aksawnee asks during polar bear management hearings in Iqaluit on Thursday, Nov. 15. The KWB wants public safety to be a priority in polar bear management, following the death of a man in Arviat and one in Naujaat this summer. (PHOTO BY BETH BROWN)

Inuit hunters should not be penalized for killing more female polar bears than allowed under Nunavut’s current harvesting system, the Kivalliq Wildlife Board says.

The board wants to see a five-year ban on penalties that are currently applied when Inuit hunters exceed a ratio of two males for every one female.

That’s according to a written submission sent on Oct. 12 to the Nunavut Wildlife Management Board, giving feedback on the Government of Nunavut’s latest draft plan for polar bear management.

If approved by the NWMB, the new plan would replace an existing polar bear management strategy in Nunavut that predates the territory.

KWB vice chair Richard Aksawnee of Baker Lake presented that submission on Thursday, Nov. 15, the third day of a four-day hearing attended by wildlife delegates from each community in Nunavut.

In giving his submission, Aksawnee asked Nunavut Tunngavik Inc. for advice on how Nunavut hunters and trappers organizations could take legal action under the Nunavut Agreement when Inuit hunting rights are violated.

“It is the HTOs’ mandate to represent the interests of Inuit hunters and their hunting rights,” Aksawnee said. “It is extremely important that Inuit Qaujimajatuqangit be more integrated.”

The KWB is suggesting that after five years without penalties, the GN could then do a conservation review to see how male and female populations are affected.

“After five years, a harvesting analysis and population survey can be done to determine what ratio of males and females were actually caught during the time period and evaluate the impact on the overall [Western Hudson Bay Polar Bear] population to determine whether severe penalizations for overharvesting females need to be reinstated,” reads the KWB submission.

If eliminating penalties on the male-female sex ratio for harvested polar bears cannot be agreed to, then the KWB says it is open to talking about other ideas—as long as those options focus on Inuit knowledge and prioritize public safety.

The hearing comes following two polar bear-related deaths in the Kivalliq region this summer, one in Arviat and one in Naujaat.

“These tragic events led to public outcries about the dangers presented by polar bears and have tested community members’ limits with how polar bear management currently is practiced,” the KWB wrote.

Given this, the KWB is also asking for a more robust polar bear-deterrent program and for conservation officers in every community.

Aksawnee echoed the concerns of other delegates who said the government isn’t treating polar bear management as a life or death scenario.

“We at the KWB, we cannot understand why the government is willing to compensate for property damage, and not a human life,” Aksawnee said. “What’s more valuable, a cabin, a snowmobile, or a human life?”

The GN currently has a program where residents can apply for funding when property is damaged by wildlife. The Workers Safety and Compensation Board does compensate active harvesters injured while hunting, and families of harvesters fatally injured in their work, a GN lawyer said.

The NWMB suggested that a full information package about this program be circulated to community HTOs in Nunavut.

There are 38 polar bear tags for the Kivalliq region now, after Nunavut’s Minister of Environment added four tags to the Western Hudson Bay subpopulation quota this summer.

The Arviat HTO is asking that tags be increased again under the current management system—where defence kills count as one tag, and a female killed outside the allowable sex ratio could count as two tags.

“The polar bears are digging up graves. This is too much,” Arviat HTO chairperson Thomas Alikasua said.

Wildlife monitors in the community see polar bears every day, he added.

A wildlife specialist for the Qikiqtaaluk Wildlife Board said on Nov. 14 that Inuit hunters are seeing more unhealthy male bears in Nunavut. Those hunters suggest the male population is over-hunted because of the sex ratio, potentially making polar bears more aggressive without the competition and guidance of older more experienced male bears.

Submissions to the NWMB by federal groups and environmental organizations said the GN’s proposed plan for bear management overlooks the impact climate change has on polar bear populations.

“We’re not out to slaughter bears,” said the KWB’s Brian Sigurdson, who is also chair of the Rankin Inlet HTO.

“My experience in Nunavut is people don’t like decreasing quotas,” he said.

Wildlife officials in Nunavut are now investigating the illegal killing of four bears near Arviat that followed the summer death of Aaron Gibbons.

As Kivalliq communities share polar bear populations with Manitoba, the KWB is also monitoring a growing northern tourism industry around Churchill that could make polar bears more used to being around humans.

“In Nunavut polar bears are hunted by Inuit. In Manitoba, they are a tourist attraction,” Aksawnee said.