Chou Consulting and Development seeks at least $1.25 million in damages 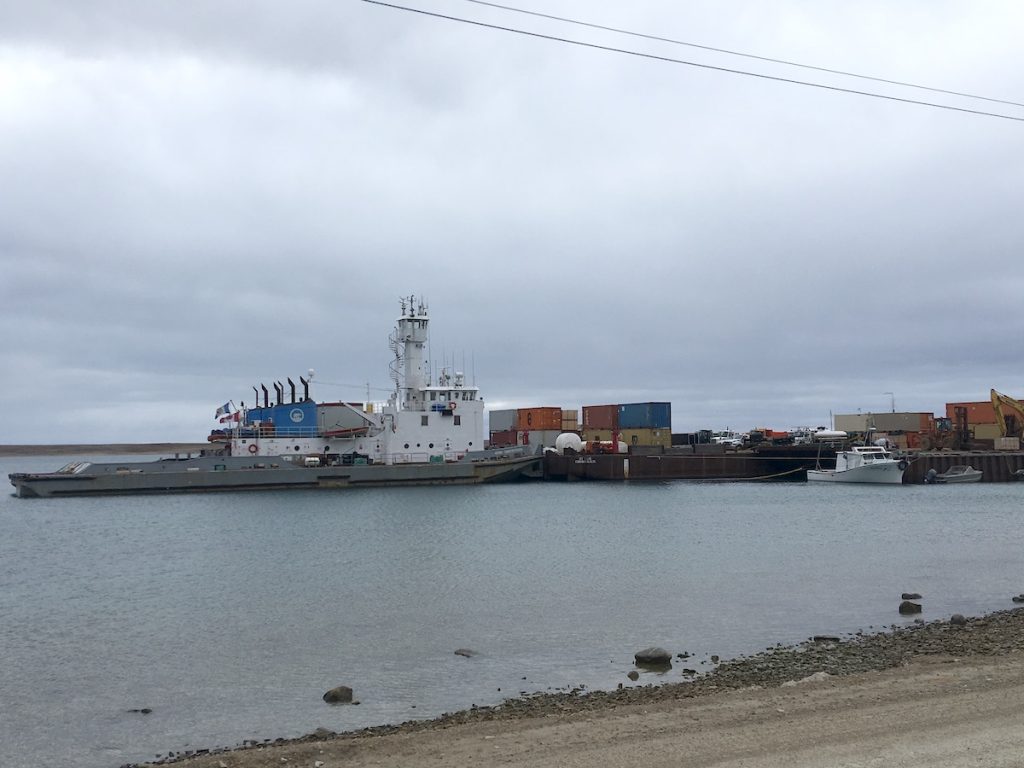 The Henry Christoffersen, a barge owned by MTS, is tied up at the Cambridge Bay dock on Thursday, Aug. 29. On board were many vehicles and other cargo on their way to clients in Cambridge Bay who waited nearly a year to receive them. (Submitted photo)

A Cambridge Bay company is suing Marine Transportation Services, a company owned by the Government of the Northwest Territories, along with six other parties, for damages of at least $1.25 million.

Chou Consulting and Development Inc. filed a statement of claim on Aug. 23 in federal court in Toronto, alleging that MTS misrepresented its ability to deliver a shipment of construction materials for a four-plex condo last fall.

Chou also alleges that MTS then failed to properly store these materials over the winter, making them unusable.

“Chou has suffered significant damages, including but not limited to the value of the cargo or the damaged portion thereof, as well as lost profits and lost opportunities,” reads the statement of claim, whose allegations have not yet been proven in court.

On Aug. 28 of this year, an MTS barge finally arrived in Cambridge Bay with the remaining cargo.

The statement of claim lists the Edgar Kotokak, Nunakput and Henry Christoffersen vessels, the GNWT’s Department of Public Works, its minister of infrastructure and MTS as all being responsible for the damages incurred.

They have 30 days to respond to the statement of claim.

The statement of claim says they, or one or more of them, had an obligation to exercise “reasonable care” of the cargo and ensure it would be delivered safely to its destination in the same condition in which it was received.

But they breached these obligations, the statement of claim alleges, “and are therefore liable to it” and that the “damage to the cargo was directly caused by the defendants’ negligence.”

That alleged negligence includes, but is not limited to:

The statement of claim also asks for pre- and post-judgment interest as applicable, the costs of the action, and “such further and other relief as this court deems appropriate.”

The statement relates how on April 23, Chou first contracted with MTS for the transport of building materials and other goods from Hay River in the NWT to Cambridge Bay.

In order for the cargo to be eligible for an anticipated delivery date of Aug. 26, 2018, MTS required that the cargo be delivered to Hay River before July 1, 2018.

But following delivery of the shipment to Hay River, MTS advised Chou that delivery to Cambridge Bay would be delayed.

The statement of claim cites “multiple representations” from MTS regarding delivery of the cargo, “negligently or deliberately, that they knew or ought to have known were untrue” that the cargo, although delayed, would certainly be delivered by October 2018;

The statement says the minister and other defendants “were aware that MTS had fully committed its marine resources to deliver cargo relating to contracts concluded with other commercial parties, including a major contract with the government of Alaska, such that it would be impossible to deliver the cargo at the time promised.”

The cargo was not delivered as contracted for, and the bulk of it was stored at Inuvik.

Although some was ultimately delivered by air to its destination in Cambridge Bay during the winter, the majority of it was stored where it’s alleged to have “sustained significant damage due to the negligence of the defendants.”

Over the past year, Chou has not been alone in its anger against MTS. Peter Laube of Kalvik Enterprises Inc. in Cambridge Bay put up a sign on his truck during the Kitikmeot trade show urging people not to do business with the MTS.

That was not the first public display of Laube’s anger: last November, at the Cambridge Bay landfill, as they burnt mouldy flooring that MTS had flown in, workers at Kalvik held up a sign saying “Thank-you, M.T.S.”