“I’m so sad to see a once-proud school, the home of the legendary Grizzlies, brought to such a sad state” 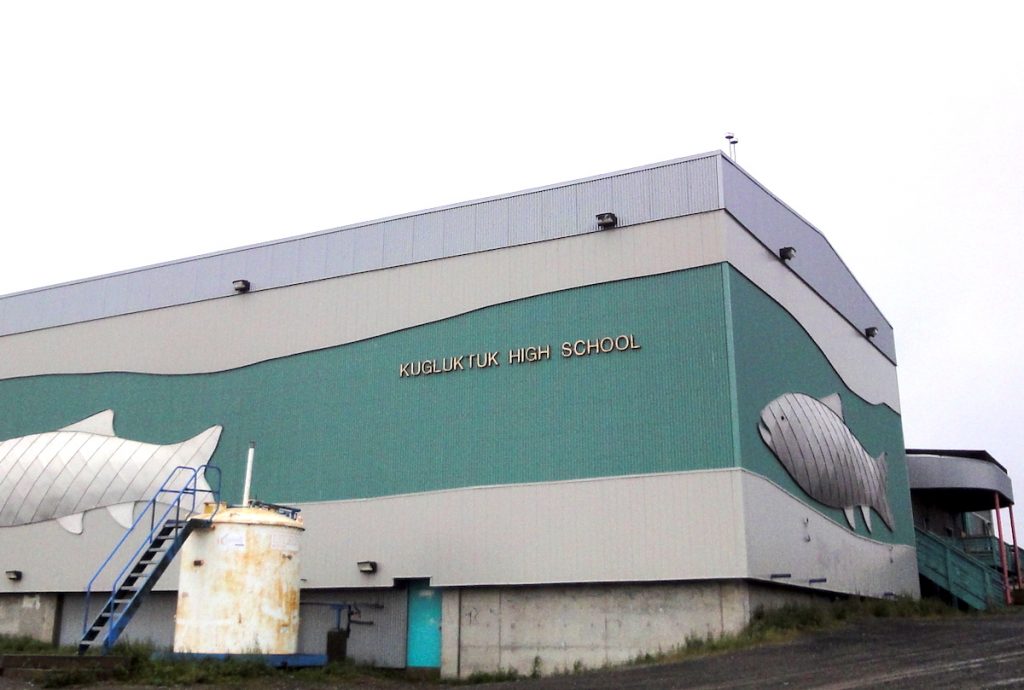 Kugluktuk High School is about to see a huge turnover in teaching staff next year, as at least five teachers have said they are not coming back. (File photo)

Kugluktuk is facing a big exodus of teachers: five by the Education Department’s tally, seven according to a community head count of which teachers are leaving and which ones are staying.

The discrepancy over the number of departing teachers is explained by the department excluding two from their tally, one on parental leave and another who was suspended, these sources told Nunatsiaq News.

But the Education Department disputes that teacher turnover in the community is higher than reported. “The Department of Education only needs to fill five positions for the 2020-21 school year. All other educator positions have been filled by a combination of returning staff and new hires,” the department said in an emailed statement.

The departures will come as yet another blow to Kugluktuk High School, which lost a popular principal last year, they said.

“I’m so sad to see a once-proud school, the home of the legendary Grizzlies, brought to such a sad state,” the concerned parent said. “It’s also been home to the ever-so-recognized and successful pre-trades program.”

“Education in Kugluktuk has surely deteriorated when it was strong and successful in so many ways.”

The school that serves about 220 students in the western Nunavut community was the subject of the acclaimed 2018 sports drama film, The Grizzlies, about its youth lacrosse team that helped combat an epidemic of youth suicide in the community.

But there’s been no lacrosse at the school for many years, and now all the coaches for soccer, hockey and basketball are leaving too, the same parent said. Only coaches for volleyball and table tennis will still be on staff after half the school’s teachers leave.

“With all the grief and hardships this town is going through due to social problems, the school used to be a haven for students,” that parent said.

But that hasn’t been the case since March when it closed down, along with other Nunavut schools, as a COVID-19 prevention measure.

“Morale is down. The only thing that is up is the number of staff leaving,” she said.

The teacher mentioned above, who is one of those leaving Kugluktuk, told Nunatsiaq News that he had decided to resign from his position in early April and book his ticket for southern Canada after a year filled with turmoil.

“The world is changing, and I don’t have [a] job lined up. I don’t know if there is going to be a job for me or places will be hiring, but at the same time we’re still finding it stressful. The North is stressful at the best of times,” he said. “But there’s a been a lot of unnecessary stress.”

He said his decision has nothing to do with the community, where he has worked for several years, or his students, whom he praised for their resiliency.

His decision to leave has everything to do with a series of upheavals during which he said he and other teaching staff received little administrative guidance and lots of mixed messages.

That meant students were shuttled to temporary classrooms in the community of about 1,500, and teachers struggled to get the supplies and materials they needed for their classes, he said.

Due to concerns about air quality in the high school after repairs were completed, students continued to attend classes in the hamlet’s recreational centre, dubbed the “south campus,” and at the elementary school, known as the “west campus.”

“During that time, massively, you had kids show up the first day or two, then attendance dropped like a stone,” he said.

Everything became better when they moved back into the school on Sept. 23.

But then on Nov. 2 came the ransomware attack that knocked out the entire Government of Nunavut’s computer network.

“We were plunged back to using basic resources,” he said.

Then, in March, just after report cards were handed out, he and the other teachers learned that schools were to close for two weeks to limit the possible spread of COVID-19.

“We were told not to take things [from the school], not to leave the community,” although the principal of the school did leave Kugluktuk, he said.

Schools in Nunavut, which shut on March 17, were initially to remain closed to students until April 7, but that date was pushed back to April 21.

In early April, teachers were told they could get back into the schools, and then, after April 21, teachers were ordered to return to their communities.

“Teachers weren’t given any guidance during that period,” he said. “Everything was pushed to the last minute, but then there’s the trickle-down effect of that and I had to do everything last minute.”

To be back in the school, without students, was “surreal” and “crazy,” he said.

What he found worse, the teacher said, was that he received no guidelines for the work packages that teachers were asked to prepare for students when requested by the students, their parents or their guardians.

“Was it stuff we were going to evaluate? They didn’t give us any sort of guidelines,” he said.

The Education Department disputes this, however. It says that guidelines for preparing work packages were sent to all schools on April 17.

Teachers were also asked to contact students, but the teacher said didn’t feel comfortable doing that.

“It was almost like forcing the work packages down their throats, which didn’t sit well with staff,” he said.

“I was hired to teach, not for sales and to peddle work packages—why are we calling and badgering them about work packages?”

With a little more than two weeks left in Kugluktuk, he’s now looking to his departure with some anxiety because of all the unknowns in the south.

But when asked if he would recommend his job to others, he said, “At this time I would say no.”

“It’s still in many ways a great community, but with regards to education it’s fallen in stature,” he said. “It’s sad. I’m a teacher and I can only do so much. At some point I need a hand from administration.”

Nunavut Teachers’ Association President John Fanjoy told Nunatsiaq News earlier this month that he expected the education system to be short-staffed again this coming September, for the third year in a row, and that “people need to know that it is not due solely to COVID-19.”

The Education Department also maintains the COVID-19 pandemic has not affected teacher turnover.

“At this time last year, Kitikmeot School Operations had 20 educator positions in open competition, five of which were for Kugluktuk schools,” the department said.

“The Department of Education would like to thank those educators who are leaving Nunavut for other opportunities, and wish them the best.

“Their work has been invaluable these past few months as they supported students and communities during these unprecedented times.”