Kivalliq community now has five polar bear monitors, who ensure there is a community patrol 24 hours a day 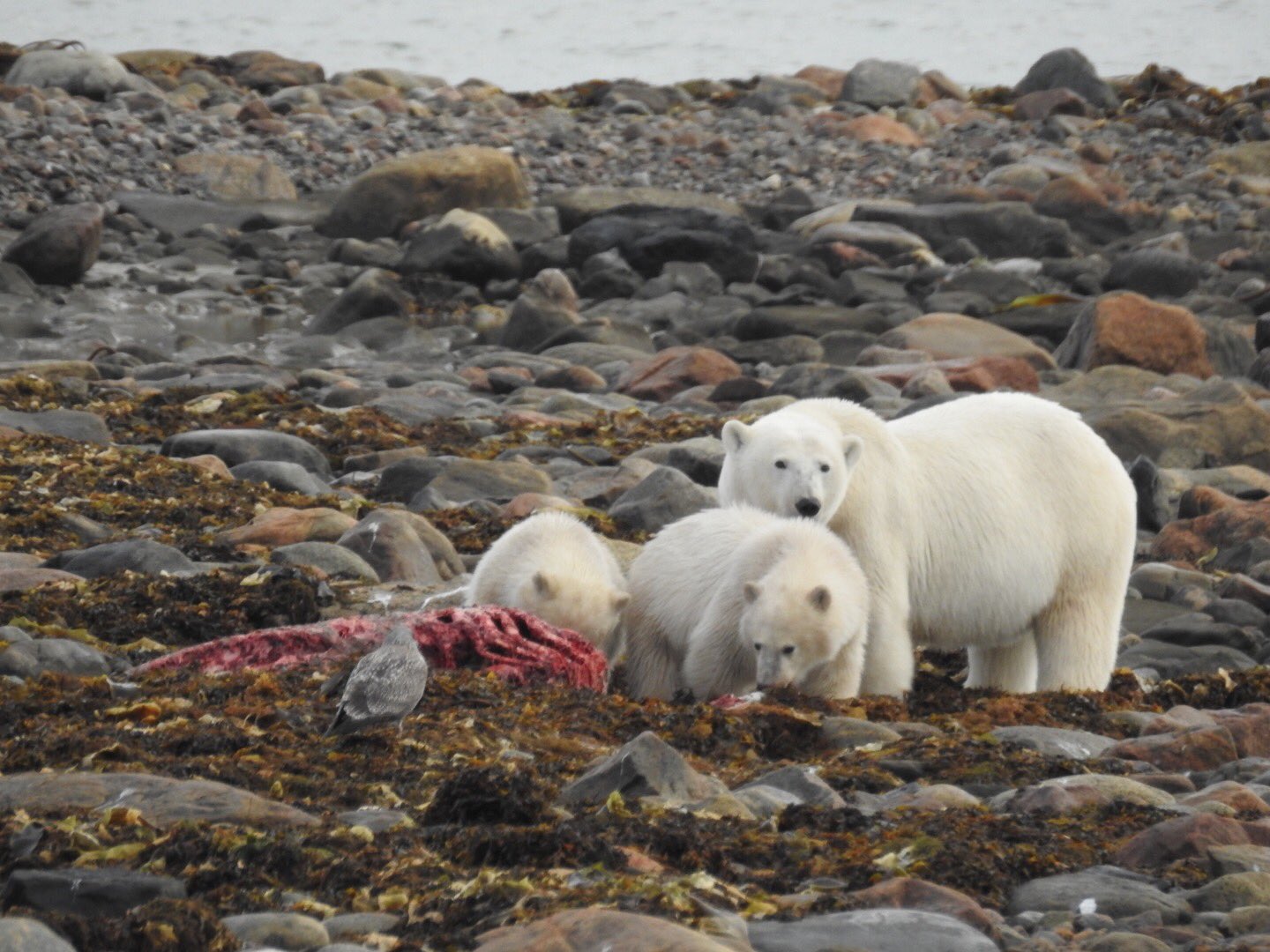 Gordy Kidlapik spotted this polar bear mom and cubs eating a whale carcass just outside Arviat last month. Local bear monitors came to take the carcass out to sea, so it wouldn’t attract any more bears. (Photo by Gordy Kidlapik) 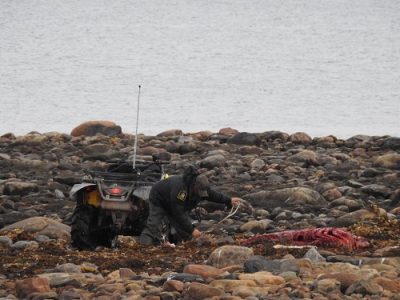 Arviat polar bear monitor Leo Ikakhik is pictured collecting a whale carcass on Sept. 28, with the intention of dragging it out into Hudson Bay, to deter any more polar bears from coming into town. (Photo by Gordy Kidlapik)

This normally wouldn’t have drawn much attention from the community, if it weren’t for the imposing visitors.

Gordy Kidlapik could see the bear family chowing down from his living room window. The hamlet councillor stepped out to take photos of the trio—from a safe distance with a good zoom lens.

The scene is not an uncommon one.

They’re a sight to behold, but polar bears continue to be one of the biggest daily threats community members in Arviat face, particularly at this time of year as the animals make their migration north.

Kidlapik quickly reported the sighting of the mother bear and her cubs to the community’s bear monitors—a team of five employed by the territorial government, who have been patrolling the community 24 hours a day since mid-September to protect community members and their property.

The hum of the motor frightened the bears off, at least temporarily. To be sure they stayed away, Savikataaq Jr. and Ikakhik dragged the carcass out into the bay by boat and sunk it.

“It’s that time of year again, where the bears start migrating and moving,” said Savikataaq, who, besides being a local wildlife officer with Nunavut’s Environment department, is also Arviat’s mayor.

“That’s what we do when there are any attractants close to town. In that instance, we dragged the carcass out to sea.”

Other times, attractants are part of the team’s strategy to lure bears in order to trap the animals, so they can be relocated elsewhere.

In one luring station, staffers freeze seal or whale meat in a big frozen water popsicle and create a scent trail that leads the bears away from the community.

The stakes are high: this Nunavut community lost one resident to a polar bear attack not long ago.

In July 2018, Aaron Gibbons was visiting nearby Sentry Island—roughly 10 kilometres from Arviat—with his three young children, when a polar bear approached the group. Gibbons got between the bear and his children in order to protect them, but didn’t have his rifle on him when the bear attacked. Gibbons later died from his injuries.

A majority of bears will react to gunshots and bear bangers, but the animals are growing more accustomed to loud sounds and human interaction.

Fortunately, Savikataaq said, it’s been a long time since a bear threatened a human directly.

“There’s always someone out patrolling now”

In 2011, Leo Ikakhik was the first bear monitor hired by the hamlet to do evening and night patrols.

But with an increase in polar bears coming into the community, so did the need for a 24-hour-a-day response.

“There’s always someone out patrolling now,” Savikataaq said. “It greatly increases the safety factor for the community, having those shifts staggered so someone is always working.”

Community members can report polar bear sightings to a dedicated line, at 857-4444, which is monitored 24 hours a day, and then relayed out to whoever is on patrol by radio.

Typically, bear traffic slows in the winter months as Hudson Bay freezes over, though a changing climate means it’s harder to predict when that will be.

The patrol team will work as long as they’re needed, Savikataaq said.

“My main concern is the safety of people,” he said, “and then to get the bear out of town.”