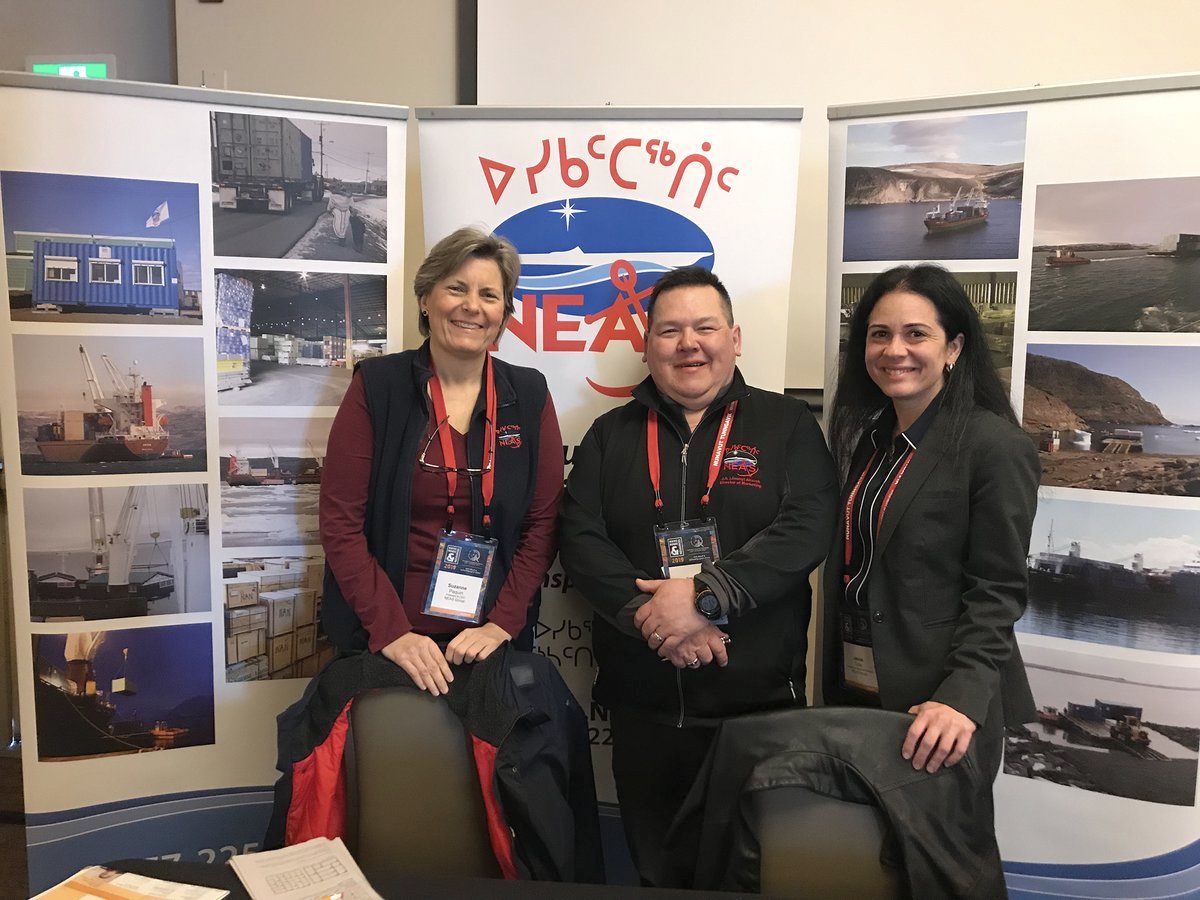 Representatives of Nunavut Eastern Arctic Shipping Inc. were smiling even before the April 25 announcement that their company would become the Government of Nunavut’s “dedicated carrier” for the majority of its annual sealift resupply. Seen here at their trade show booth at the recent Nunavut Mining Symposium, from left: Suzanne Paquin, CEO and president of NEAS Group; Jimmy S. Akavak, director of marketing; and Jamie Tolis, business development manager. (Photo courtesy of NEAS)

Nunavut Eastern Arctic Shipping Inc. has won a big contract to resupply goods to 18 Nunavut communities for the Government of Nunavut over the next five years, with the possibility of two one-year extensions.

At the same time, NEAS, whose parent company is based in Valleyfield, Que., will be able to serve private customers, businesses and mines.

Previously, the GN contract to deliver sealift supplies had been held by NEAS’ main competitor, Nunavut Sealink and Supply Inc.

For residents of Kugaaruk, the terms of the agreement between NEAS and the GN means they can now reserve directly with NEAS for the Valleyfield to Kugaaruk service.

Until recently, Kugaaruk residents had to reserve through the GN for Canadian Coast Guard icebreaker delivery via Nanisivik.

So, instead of having to make two bookings for Kugaaruk, it’s now one, said Suzanne Paquin, the CEO and president of NEAS.

Paquin said she was “happy and thankful” for the GN’s vote of confidence, adding that “reliability was definitely a factor.”

For NEAS it’s a “great opportunity” that will see the company refleeting—that is, not adding vessels but bringing in large vessels, Paquin said.

For communities in western Nunavut that suffered the cancellation of the Northwest Territories-owned Marine Transport Services barge last October and remain angry over cargo left in Inuvik, they can count on NEAS arriving by the first week of September, Paquin said.

NEAS isn’t happy about having to compete against a government enterprise in western Nunavut, said Paquin.

“We’ve made significant investments in our tugs, our ships, our equipment, we train. We have a lot of administrative systems, and all we’re asking for is a level playing field, fair competition,” she said.

The NEAS sealift vessel is scheduled to arrive in Kugluktuk and Cambridge Bay by the end of the first week in September, Paquin said.

NEAS Group Inc. is jointly owned by Makivik Corp. and Transport Nanuk Inc., whose shareholders are Logistec Corp. and the North West Co.

Nunavut Eastern Arctic Shipping Inc., established in 1998 and headquartered in Iqaluit, is governed by a board of directors with majority Inuit representation and ownership, including shareholders registered as Nunavut businesses and local Inuit firms.