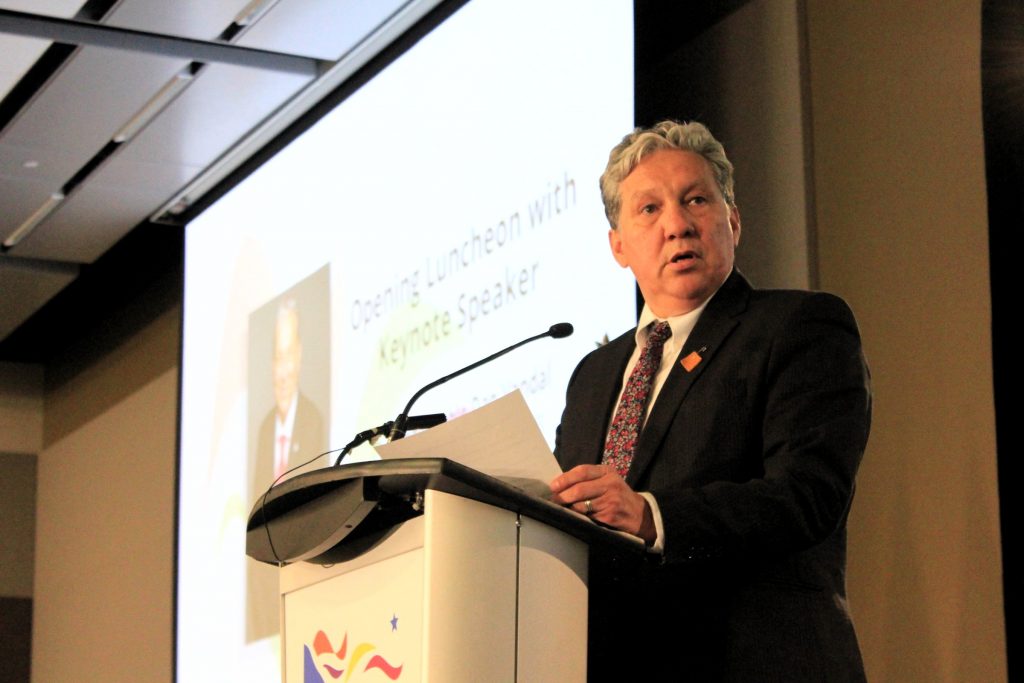 Northern Affairs Minister Dan Vandal speaks at the Northern Lights conference and trade show in Ottawa this past Feb. 5. (Photo by Lisa Gregoire)

The implementation of the Liberal government’s new Arctic and northern policy framework likely means that Ottawa will have to put more money into housing for Nunavut, Northern Affairs Minister Dan Vandal told Nunatsiaq News this week.

“We want to put teeth into that framework with some funding for housing. We hear the message loud and clear that it’s a priority,” Vandal said in a telephone interview from Rankin Inlet.

Vandal made his first visit to Nunavut as Northern Affairs Minister this past Feb. 12 and Feb. 13, when he visited Rankin Inlet and Arviat and met with Premier Joe Savikataaq and other regional leaders.

He also visited participants in Arviat’s young hunters program, which has received $1.23 million in funding from the federal government.

Great to be in Rankin Inlet today to meet with regional staff. Thanks to Minister Lorne Kusugak for showing me around. Appreciate the warm hospitality! pic.twitter.com/tsUxC8csPh

The Liberal government released its Arctic policy framework last September, the day before the federal election campaign kicked off, with no implementation plan for its numerous recommendations.

Now, that plan will be “co-implemented” in the same way that the framework itself had been co-developed with 25 Indigenous organizations and six territorial and provincial governments, Vandal said.

And he said that in meetings and briefings he’s attended since taking on the Northern Affairs portfolio, housing has emerged as a top priority.

“You know what? Everywhere I go, people, they talk about housing as being a priority for the North,” he said.

He also referred to the Liberal government’s national housing strategy, released in 2017, calling it “Canada’s most ambitious housing program.”

But in Nunavut, the federal government has made no new commitments to social housing construction since 2017, when they promised about $240 million, spread out over 10 years.

But Vandal said he understands that implementing the Arctic policy framework means his government must spend more on the North.

“There’s a lot of policy areas within the framework and we know at the end of the day, it’s going to cost money to actually implement some of those policies, whether its transportation, or infrastructure, or housing,” he said.

As for Nunavut’s planned addictions and trauma recovery centre, there’s no uncertainty over the federal government’s willingness to help fund its construction and continued operation.

Repeating promises that the federal government made last August when they signed an agreement to build the facility, Vandal said Ottawa’s commitment is rock solid.

“We are working positively with Nunavut Tunngavik on a comprehensive Inuit-driven approach to address substance abuse and trauma in Nunavut. We are 100-per-cent committed to that treatment centre,” he said.

That means the federal government will put at least $47.5 million into the centre for construction, and spend up to $9.5 million dollars a year for five years to cover its operating costs.

And NTI, through the Makigiaqta Inuit Training Corp., which it controls, will put in $11.85 million over five years to train Inuit counsellors.

As for the Government of Nunavut’s desire to build high-level extended-care homes in the territory, Vandal said he’s talked about that issue with Premier Joe Savikataaq at a meeting in Ottawa.

But though he looks forward to talking about the elder care issue, he said “we haven’t reached a conclusion on that subject yet.”

Vandal, the Liberal MP for Saint Boniface-Saint Vital in Winnipeg and a citizen of the Métis Nation, describes himself as a “proud Manitoban.”

For that reason, he said he strongly supports a proposal to build a Kivalliq-Manitoba hydro-electric line and fibre optic link.

“I think it would be a great, great partnership to get that done,” Vandal said.