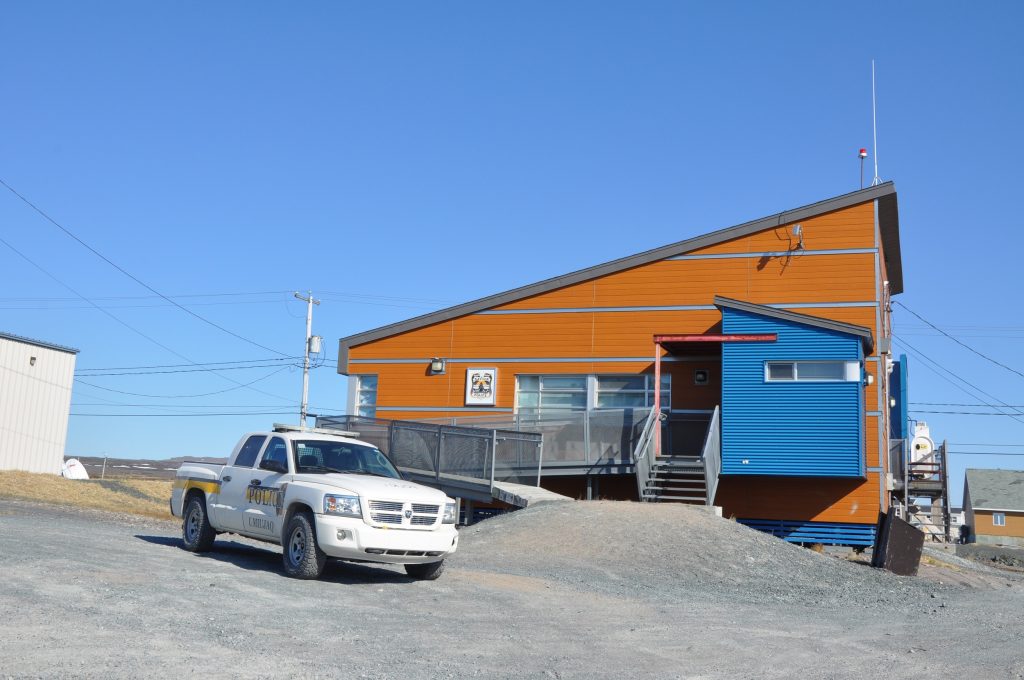 KRPF officers were cleared of wrongdoing in an April 2018 incident when their police vehicle hit and injured a suspect. (Photo by Sarah Rogers)

It’s been over two years since the incident that left Maina Aculiak with permanent injuries.

The 50-year-old Nunavik woman is now living in the Aaniavituqarq Crisis Centre in Puvirnituq, a residential facility for Nunavimmiut living with chronic mental health conditions.

Her physical health has suffered: Aculiak has had to re-learn to walk, and a metal plate put into her arm causes her pain and discomfort, explained her longtime partner, Paul Tookalook.

In April 2018, Aculiak was struck by a police vehicle in her hometown of Umiujaq while the police pursued her. At the time, Aculiak was armed with a knife; she had previously called the police from the community’s childcare centre, threatening to harm herself and others.

As Aculiak ran through the streets towards a house, a Kativik Regional Police Force officer accelerated the police vehicle they were driving in order to intercept her. But the officer hit ice and the vehicle skidded forward and struck Aculiak in the street.

The woman was medevaced to a Montreal hospital where she was treated for broken ribs, fractured vertebrae, a broken arm and a punctured lung.

Normally when a civilian is injured during a police intervention, that police force must inform Quebec’s Bureau des Enquêtes Indépendantes, or BEI, whose role is to investigate the police response.

The KRPF did in fact report the incident when it happened, but the BEI only decided to open an investigation in June, after the French-language newspaper La Presse reported on Aculiak’s extensive injuries.

Once the BEI completes its investigation, the agency passes its findings onto the provincial prosecutor’s office. Quebec’s director of penal and criminal prosecutions, or DPCP, then decides whether officers should face charges or disciplinary measures.

“Considering the threat made by the woman on the phone, the fact that she was armed with a knife and running towards a house, as well as the distance between the woman and the police, the police officer who was driving the vehicle had reasonable grounds to believe that the use of the patrol vehicle to prevent the woman from entering the house was necessary in order to protect its occupants from serious bodily harm or death,” the DPCP wrote in its French-language decision, released last Sept. 26.

“Consequently, the DPCP is of the opinion that the use of force by police officers was justified.”

Tookalook, who lives in Umiujaq and doesn’t speak French, said he was never notified by the prosecutor’s office of that decision.

He remains angry and frustrated with policing in Nunavik and feels left out of the investigative process that followed.

“Something has to be done,” Tookalook said. “What they did to her … she couldn’t walk.”

Tookalook acknowledges Aculiak’s criminal behaviour, but said it stems from the trauma she experienced when the couple’s son was taken from them by youth protection in 2016.

Since the BEI launched in early 2016, the agency has investigated 168 police-involved injuries or deaths across Quebec. Thirteen of those have been focused on Kativik Regional Police Force officers—eight deaths and five injuries.

The BEI has completed and released 12 of those investigations into police altercations in Nunavik, and none have resulted in charges or disciplinary measures against officers.

The BEI’s work in Nunavik also makes up a substantial part of the agency’s caseload, at 7.7 per cent of all the BEI’s independent investigations, while Nunavik accounts for less than one per cent of Quebec’s overall population.

The BEI has come under fire for its lack of Indigenous representation, something the agency has tried to address by hiring an Indigenous liaison in 2018. That post is currently held by an Innu woman, Bérénice Mollen Dupuis, whose role it is to give sensitivity training to other staff and to communicate with First Nations and Inuit communities.

More recently, the BEI has pledged to recruit Indigenous investigators to its team.

“During the next call for candidates which will fill investigator positions, the BEI will ensure that it is widely shared within Indigenous communities in order to reach as many interested people as possible,” said a BEI spokeswoman in a June 18 email to Nunatsiaq News.

Currently, the agency employs 45 investigators—a mix of civilians and former police officers, four of whom identify as visible minorities, the agency said.

Four of the 96 officers currently employed by the Kativik Regional Police Force are Inuit.

Since May, the DPCP has cleared Nunavik police officers in three separate investigations that happened in 2018 and 2019.

Among them is the January 2019 death of a Salluit teenager.

Maggie Tayara, 15, went missing in the early hours of Jan. 27, 2019. When friends and family reported her missing later that morning, KRPF officers conducted a search, but could not locate the young woman.

Tayara’s body was found the following day under a home. It was later determined she died of hypothermia.

Earlier this month, KRPF officers were also cleared regarding their role in response to the October 2018 death of Penina Adams, 18, who, according to the investigation, died of a self-inflicted gunshot wound.

The DPCP also determined this month that KRPF officers did not use excessive force when they shot and killed Tommy Ningiuk, after an overnight standoff in Inukjuak on Sept. 4-5, 2018, in which Ningiuk repeatedly fired a weapon from his home and barricaded others in the building.

In addition to its independent investigations into civilian injury and death, the DPCP also processes complaints that have been made about police officers. Of the dozens of investigations, only two officers have ever been charged with a crime—one of whom was a KRPF officer, Timothy Sangoya, who was accused of sexual assault last year.

Lawyers for that case are due back in court on Aug. 17 to set a date for his hearing.

An earlier version of this article said the KRPF did not report an April 2018 incident until months later. In fact, the KRPF did report the incident when it happened; the BEI only decided in June 2018 to investigate the incident. Nunatsiaq News regrets the error.