Nunavummiut have to stay home, but their art continues to travel

One emoji, two virtual exhibitions and a glass-panelled qajaq 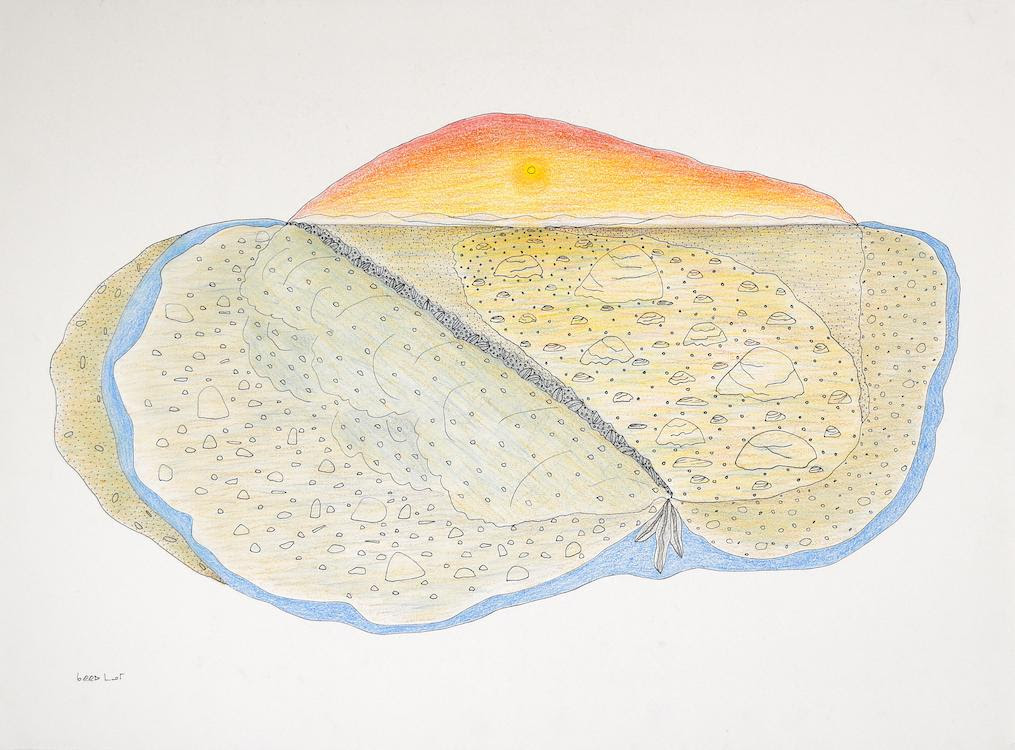 This untitled drawing by Kinngait artist Qavavau Manumie is one of eight works by him included in an exhibition that opened on June 5 at the Museum of Modern Art in Warsaw. The exhibit, “The Penumbral Age: Art in the Time of Planetary Change,” runs until Sept. 13. (Photo courtesy of the West Baffin Eskimo Cooperative)

Restrictions due to the COVID-19 pandemic have greatly limited opportunities for travel from Nunavut over the last four months, but artwork created by Nunavummiut continues to reach a wide audience.

In certain cases, there’s an opportunity for those sheltering close to home to access those artworks virtually.

Take, for example, drawings showing life in an often-damaged environment in the North by Kinngait artist Qavavau Manumie, which are part of an exhibition that opened on June 5 at the Museum of Modern Art in Warsaw.

The exhibition, “The Penumbral Age: Art in the Time of Planetary Change,” runs until Sept. 13.

Manumie’s drawings, rendered in graphite, coloured pencil and ink on paper, often feature wildlife, such as a group of walrus, affected by climate change and the garbage that humans leave behind.

You don’t have to travel to Poland to see these drawings, as you can visit the exhibition online.

The Quebec-based Inuk artist made good use of her time when the COVID-19 pandemic hit and her in-person classes at Bishop’s University in Sherbrooke, Que., were cancelled. Komangapik said she finally had time to go back to a bunch of art projects—including the emoji design.

“When you’re in school, you don’t really have time to do all the art you want to do,” she said.

“But during the pandemic, I had this big, creative explosion and did about 10 paintings.

The surprise discovery of a crate full of forgotten printed textiles in a storage room at the Kenojuak Cultural Centre and Print Shop in Kinngait was the starting point for an exhibition at the Textile Museum of Canada in Toronto that began last December.

The exhibition, called Printed Textiles from Kinngait Studios, is currently closed to the public, but you can still have a virtual visit online.

The show presents the story of a group of Inuit artists who created a collection of bold graphic textiles in the 1950s and 1960s.

In the mid-1960s, the textiles were marketed by Arctic Co-operatives Ltd. across the country and were so popular that they were featured at Expo 67 in Montreal in 1967.

But in spite of that popularity, the textile-printing program in Kinngait came to an end in 1968.

This exhibition provides the visitor with an opportunity to see long-forgotten works by Kinngait artists, including Kenojuak Ashevak, Pitseolak Ashoona and Pudlo Pudlat.

You’ll have to travel to Ottawa to see the following work of art. 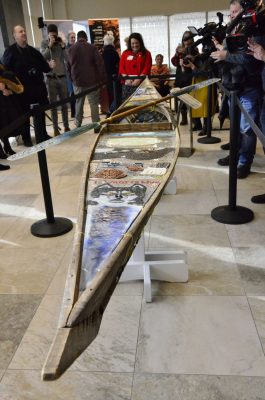 The Sivuniksattinu qajaq at the Ottawa Hospital took more than two years to complete. (Photo by Jim Bell)

Patients, visitors and staff at the Ottawa Hospital’s general campus are lucky enough to be able to see a physical representation of both Inuit ingenuity and artistry in the large waiting area adjacent to the main entrance.

Named “Sivuniksattinu,” or “For Our Future,” it’s a wooden-framed, glass-panelled qajaq, which was unveiled at a ceremony held early this year.

The production of the qajaq was very much a collaboration, starting with local elder David Erkloo, who repaired the wooden frame of the qajaq and provided guidance to Inuit artists Kaajuk Kablalik, Melissa Attagutsiak and Alexander Angnaluak, who, along with Ottawa-area glass artist Jennifer Anne Kelly, created the glass artwork on the qajaq.

The qajaq is intended to recognize the Inuit patients the hospital serves and it’s a symbol of reconciliation.

“The art piece is for everyone, even though it’s an Inuit piece, an Inuit symbol and an Inuit tool,” Kablalik told Nunatsiaq News.