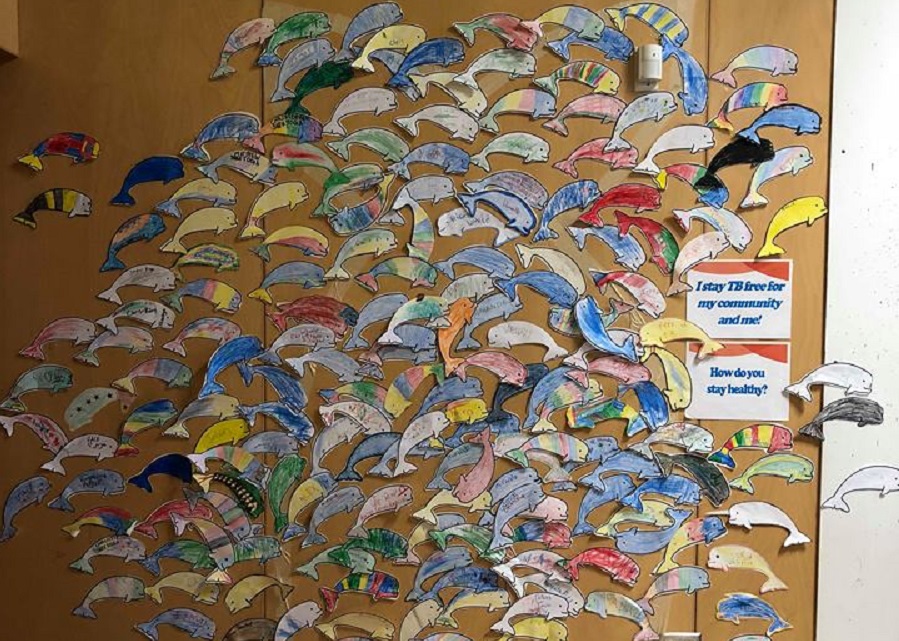 Nunavut health-care staff set up a colouring wall at Whale Cove’s tuberculosis screening clinic, where local youth could write about how they stay TB-free. (PHOTO COURTESY OF NUNAVUT’S DEPARTMENT OF HEALTH) A tuberculosis screening clinic was held in Whale Cove’s community hall from Oct. 22 through Nov. 26. (PHOTO COURTESY OF GN)

Tuberculosis has been around as long Ryan Kolit can remember, and even longer in Nunavut’s history based on stories he’s heard.

The deputy mayor of Whale Cove recalls his own grandmother being sent away to Clearwater Lake sanatorium near La Pas, Manitoba, home to a TB hospital that treated Inuit patients as far back as the 1940s.

“It’s been going on for years,” Kolit said.

The Kivalliq community along the western Hudson Bay coast hasn’t seen any outbreak of the infection in recent years, but municipal officials were still grateful that Whale Cove was chosen to host Nunavut’s second-ever TB screening clinic in October and November.

From Oct. 22 through Nov. 26, the Government of Nunavut teamed up with the Public Health Agency of Canada to fit Whale Cove’s community hall with partitioned walls and booths, X-ray machines, receiving equipment and sputum induction tents. (Sputum is the sample of phlegm expelled from the lungs and used to test for TB.)

At any given time, the clinic was staffed with a dozen or so health care workers, TB specialists and technicians, plus local staff hired to help run the clinic.

Before the clinic launched, Nunavut’s Health Department and its chief medical officer, Dr. Michael Patterson, hosted a town hall and radio call-in show to let the community know about the clinic.

Once the clinic got underway, clinic staff contacted residents by household to come in for screening. Over the five-week period, 90 per cent of the community’s roughly 450 residents had been screened.

“The interaction with the community was good; we were well-received,” said Patterson, who helped lead the clinic.

But, Patterson noted, “We were better organized, obviously, because we’ve done this before.”

Nunavut’s first TB screening clinic was hosted in Qikiqtarjuaq at the beginning of 2018, in response to an outbreak of active cases of TB reported in the community the previous year.

Because the clinic in Whale Cove wasn’t in place to treat an outbreak, health care staff could be more selective about who to examine and how to examine them, Patterson said.

The results for those who were screened can take about seven weeks to be processed, which means the department won’t have a full picture of the clinic’s outcome until January.

Patterson said the clinic has already confirmed some cases of TB, both active and latent.

“But we did not find any infectious cases,” he said. “We didn’t find any cases where the patients needed to be in isolation.”

From the hamlet’s perspective, Kolit said the clinic went well.

Overall, the number of cases of TB across the territory appears to be down this year compared to 2017, when 100 cases were reported through Nunavut.

Patterson couldn’t say just yet if the GN will host any TB screening clinics in 2019. Health officials in Nunavut are still assessing how effective this type of clinic can be.

“Treatment and diagnosis have a part to play [in the elimination of TB],” he said, “but there’s more to it than that.”

“At the end of the day, we hope the community has a better understanding of TB.”

John Main, MLA for Arviat North–Whale Cove, said he was encouraged by all the logistical and technical effort that went into co-ordinating the clinic.

Main said similar screening clinics are still an “urgent need” in other Nunavut communities and he hopes to see that investment.

“Given that TB is largely a disease of poverty, our government also has to work to address root issues such as housing, unemployment, education and economic development,” Main said.

“The federal government has to be part of the efforts to address the root causes because the GN does not have the resources to meet all our needs at this time.”

Inuit Tapiriit Kanatami released its Framework for TB Elimination earlier this week, a document that’s meant to help all four Inuit regions draft their own action plans, which will be released next March.