‘Cutting that link is quite detrimental to keeping our culture thriving,’ Nunavut MP Lori Idlout says about taking elders out of communities 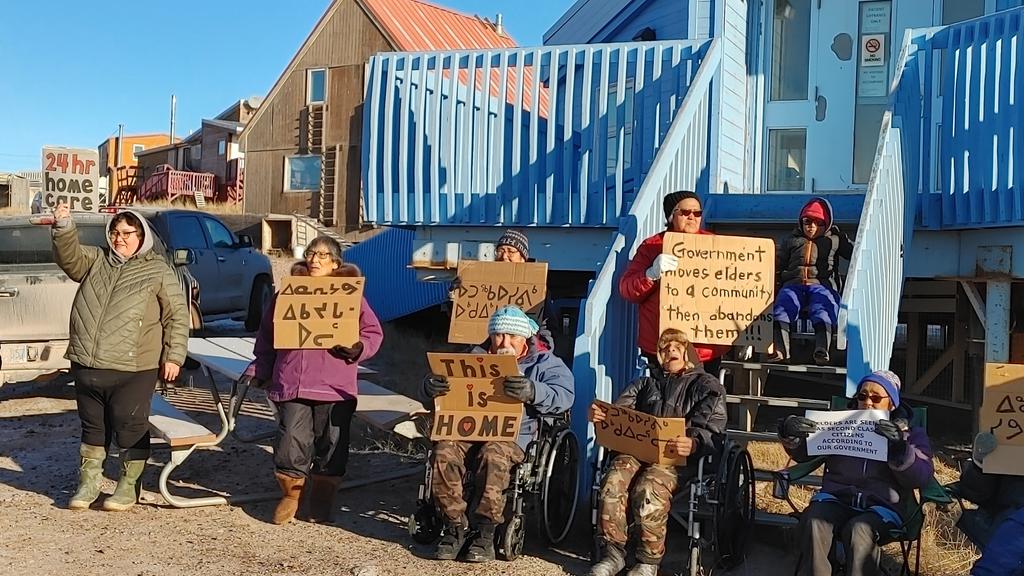 Baker Lake residents are seen in October rallying to have the Martha Taluriq elder care centre, which closed in 2018, reopened. (Photo by Craig Simailak/Twitter)

A petition to make 24-hour elder care available in each Nunavut community has received more than 21,800 signatures in one month.

Between names collected online and on paper across the territory, Manitok Thompson, one of the organizers, said the message is loud and clear — Nunavummiut don’t want their elders sent south to spend the last years of their lives away from home.

“They end up dying alone without any of their family with them,” she said.

Thompson, who lives in Ottawa, said she regularly visits some of the approximately 43 elders staying at Embassy West Senior Living in Ottawa.

She said she has cried with and hugged family members who had to leave loved ones at Embassy West.

There are currently elder care centres in Cambridge Bay, Igloolik and Gjoa Haven with a total of 28 beds. There are also two assisted living homes with eight beds each in Nunavut: one in Arviat and another in Iqaluit.

Elders with dementia and other complex care needs are sent outside of the territory.

Thompson said for patients with dementia especially, having access to familiar things like country food is important.

“I had one lady calling me who said her mother hadn’t eaten for days because she’s tired of the southern food,” she said.

Not being able to communicate with staff in Inuktitut is another issue.

In 2021, three full-time interpreters worked at Embassy West, while no Inuktitut-speaking recreation employees were on staff, according to Health Minister Lorne Kusugak in a written response provided to former MLA Pat Angnakak in June.

The Government of Nunavut has already announced plans to build new elder care facilities in the three regions of the territory, with one slated for Rankin Inlet, another for Cambridge Bay, and a third in Iqaluit.

But Thompson said this still means many elders would have to leave their home communities for care.

“People have made it very clear that they would like something in [each of] their communities,” she said, adding this would also create local jobs.

“Even if it’s four beds, that would prevent four people from leaving their community.”

To do this, Thompson suggests the GN renovates or converts existing buildings to accommodate elders.

“I’m hoping the new government will think outside the box and do something to address this issue quickly.”

In 2020-21, the GN paid $6.3 million to care for elders at Embassy West in Ottawa, according to Kusugak’s written response to Angnakak in June.

The average cost per Nunavut elder to stay at the facility this year is $15,690.83, according to the same document — more than double the cost listed in 2016.

We held a protest to reopen the Martha Talerook centre elder care home in Baker Lake, lots of support from passerbys. Baker Lake has a high population of elders and also soon to be elders. The need is definitely here for an elder care home pic.twitter.com/cOHTxSp8it

In Baker Lake, residents have been trying to have their elder care facility reopened for years. The Martha Taliruq Centre closed in 2018 because of issues with the building and the society operating the centre.

A year ago, in October 2020, then-health minister George Hickes said in the legislative assembly it would have cost more to renovate the old facility than build a new one.

Just last month, in October 2021, residents rallied outside of the closed building to reopen it, according to a tweet posted by Simailak.

Alexander Sammurtok, the new MLA for Rankin Inlet North and Chesterfield Inlet, petitioned for in-territory elder care during his first term as MLA in 2014, including the new 24-bed facility that will be built in Rankin Inlet for the Kivalliq region.

In an interview, he said people he’s talked to in his constituency are happy it’s going to be built.

“It would be great to have one in every community, but the Government of Nunavut doesn’t have the resources or the money to make this dream come true,” he said.

Lori Idlout, Nunavut’s MP, helped collect signatures for the petition in Iqaluit over the weekend and said during her campaign, keeping elders in Nunavut was a concern she heard often from Nunavummiut.

“I’m determined to make sure the lack of long-term care in Nunavut is recognized by the federal government,” she said.

With this falling under the GN’s responsibilities, Idlout said she hopes to work with Nunavut’s government to make sure it and herself are both applying pressure to the federal government to help keep elders in Nunavut.

She said elders leaving the territory doesn’t only affect them negatively, but entire communities and generations, because elders are the reason Inuit still have their culture, language, worldview and traditional knowledge.

“Cutting that link is quite detrimental to keeping our culture thriving,” Idlout said.

Thompson said the plan is to have the petition tabled in the legislative assembly when the recently elected MLAs come together for a sitting starting Nov. 19.

Then, the goal is to have a special committee created specifically for elder care.