“I was happy that people all around the world heard those stories that I made,” recalled author of Harpoon of the Hunter 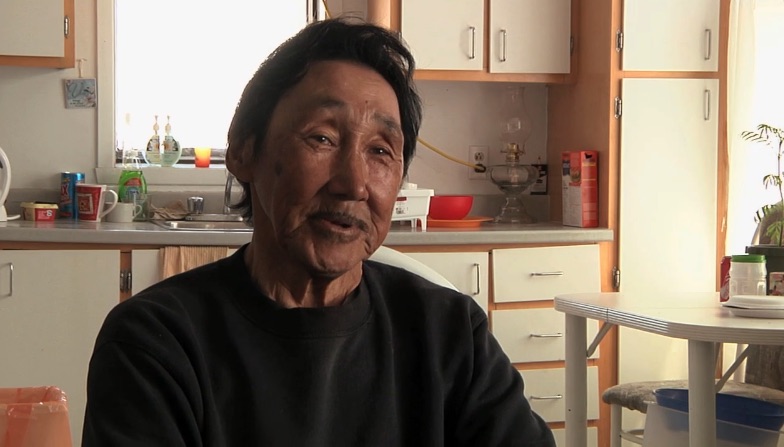 Markoosie Patsauq speaks in Iqqaumavara, a 2014 documentary about the High Arctic exiles, co-produced by Makivik Corp.and the National Film Board of Canada. (Image courtesy of Iqqaumavara.com)

We are sad to learn of the recent death of Markoosie Patsauq, a remarkable man who was the author of a book MQUP published in 1970 under the title Harpoon of the Hunter.

At the time, the press accurately described it as “an astonishing tale of a people struggling for survival in a brutal environment.” Using the now-outdated terminology of the era, the press also referred to it as “the first piece of Eskimo fiction to be published in English.”

Markoosie was born in 1941 in a camp near the settlement of Inukjuak, on the eastern shore of Hudson Bay. At the age of 12, he was among the dozens of Inuit from that region who were forcibly relocated to Resolute Bay, high above the Arctic Circle, by the federal government—Canada’s desire to assert its sovereignty in the High Arctic took precedence over the rights and well-being of the Inuit it used for that purpose.

In the 1970s Markoosie moved back to Inukjuak. He said in a later interview, “This is my land. The High Arctic is not my land … But I was up there because my parents were. And since I was young, I had to go with them.”

As a teenager, Markoosie had also spent years in the south—if that term can be applied to northern Manitoba (where he was treated for tuberculosis, a terrible scourge among the Inuit to this day) and Yellowknife (where he spent eight months at a vocational high school). He learned English and obtained a licence as both a pilot and a heavy equipment operator.

By the late 1960s he was married, had become a father, and was employed as a commercial pilot. But his ambitions stretched beyond aviation. In between flights, or when grounded by bad weather, he began to write stories, both fiction and non-fiction, using Inuktitut syllabics.

The short book that has, for the past half-century, been known as Harpoon of the Hunter was originally published in three parts in 1969-70 by an Inuktitut-language magazine that had been established by the federal government. It tells the story of a young hunter who comes of age by means of a confrontation with a wounded polar bear—the tale is told from four alternating points of view, including that of the bear. Its title was Uumajursiutik unaatuinnamut.

Markoosie based the work on stories he had heard in his childhood, but he shaped them for his own creative ends. He went on to adapt the tale for English-language readers, under the guiding hand of James H. McNeill, a former intelligence officer who worked for the Department of Indian Affairs and Northern Development. This version was offered to MQUP and quickly appeared in print. 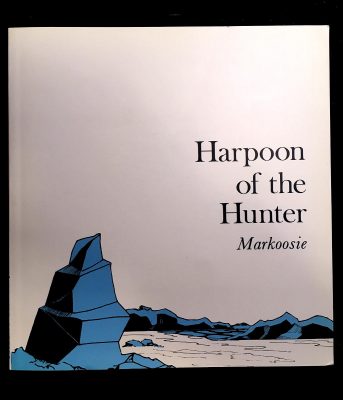 It became a publishing sensation, being reviewed in distinguished journals like The Atlantic and the Times Literary Supplement. On a promotional tour funded by the federal government, Markoosie was even interviewed between periods of Hockey Night in Canada from Maple Leaf Gardens.

The book has been translated from English into French, German, Japanese, Danish, Ukrainian, Italian and Estonian, and a French version was retranslated into Hindi and Marathi. Harpoon of the Hunter has never gone out of print in the 49 years since its publication, and it is the best-selling work in the history of McGill-Queen’s University Press. This fall 2020 MQUP will publish an edition of the book including a new translation, based closely on the Inuktitut original.

As a young man Markoosie wrote other texts too, some in Inuktitut, others in English, but none of them achieved anything like the success of Harpoon of the Hunter. Then he gave up writing. He continued to be a commercial pilot and, after returning to his home community, worked as a translator and as manager of the Inukjuak community council. He also campaigned for the Canadian government to apologize for what has become known as the High Arctic relocations.

Sadly he was too ill to be in Iqaluit on March 8, 2019, when Prime Minister Justin Trudeau finally delivered an official apology not only for the relocations but also for the RCMP’s slaughter of sled dogs, for the punishment of Inuit children who spoke their own language, for the long-standing federal policy of identifying Inuit by a number rather than a name, and for the mistreatment of Inuit afflicted by tuberculosis.

Markoosie himself was a modest man. “My plan was to write a little story, a novel, that people can enjoy,” he said in a 2017 interview. “I was happy that people all around the world heard those stories that I made.” They did indeed—and far into the future, they will.

Mark Abley is an acquisition editor with McGill-Queen’s University Press. This article originally appeared at MQUP’s website and is republished with permission.

You can find Exile in Childhood, Markoosie Patsauq’s four-part series on the High Arctic relocations, here: