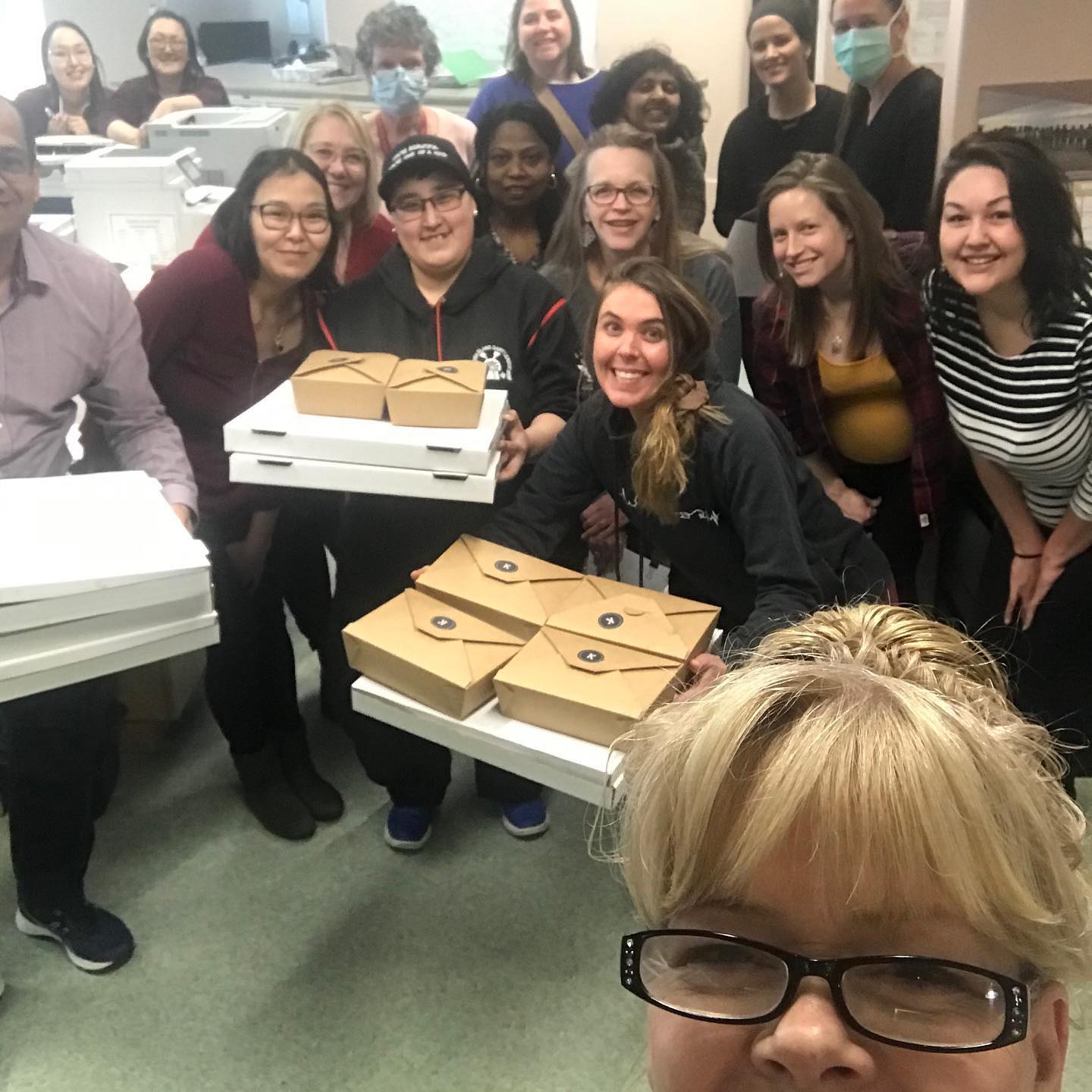 Workers at the Kitikmeot Regional Health Centre in Cambridge Bay are all smiles after receiving a surprise treat of pizza and baked goods from the Kuugaq Café. The delivery of food to essential workers in town is part of the café’s new outreach to members of the community who are helping everyone through the COVID-19 pandemic. (Photo courtesy of the Kuugaq Café)

Western Nunavut eatery reinvents itself to survive the pandemic

“We want to figure out what the new normal is”

Treating nurses, police and other essential workers in Cambridge Bay to a surprise meal is just one of the ways that the Kuugaq Café has reinvented itself during the COVID-19 pandemic.

“We want to figure out what the new normal is. We can only look at today, and we can only try to guess what tomorrow brings and see what is sustainable in the long term,” said Stuart Rostant, who has run the Kuugaq with Amanda Doiron-Rostant since 2017.

They’ve been living with change since last November, when they decided to turn the Kuugaq into more of a catering business than a café. The issues they faced then included trouble with retaining staff and planning, said Doiron-Rostant.

“In catering, you know what to expect in a day, you do it. With the service at lunch, you didn’t know if you were going to get 15 or five customers,” she said.

There were many meetings scheduled in Cambridge Bay to keep the Kuugaq busy with catering. And then the café won a big new contract to supply Canadian North with food on its many regional flights.

“Catering was our strength and getting the Canadian North contract allowed us a foundation in Cambridge Bay, so it was an opportunity to focus more on the catering side of things,” Rostant said.

Then, in mid-March, all of that ground to a halt.

“COVID-19 happened and the airlines stopped serving food, and the meetings we had for catering were cancelled,” Doiron-Rostant said.

“We pretty much lost our core business—100 per cent of our income,” Rostant added.

While in self-isolation for two weeks, they spent time mulling over the possibilities, during which time Cambridge Bay took measures to keep the community of about 1,800 free of COVID-19.

With no cases of the new coronavirus in town, they felt that they could keep their business going.

“But you look at all the other restaurants, there is no longer any restaurant cafe. It’s all turned into something completely different.” Rostant said. “The whole food industry has had to reinvent itself.”

They decided to try offering takeout orders from the café, which would be ordered and paid for online ahead of time. This appealed to a segment of the population with access to the internet and credit cards.

But the Kuugaq also reached out to the nearby Kalgen’s convenience store, where people could go and see the food for themselves and pay cash if they wanted.

Right now, there are “family dinners” available on Wednesday and Friday evenings, directly from the café, and a variety of food offered every night after 5 p.m. as well at Kalgen’s. 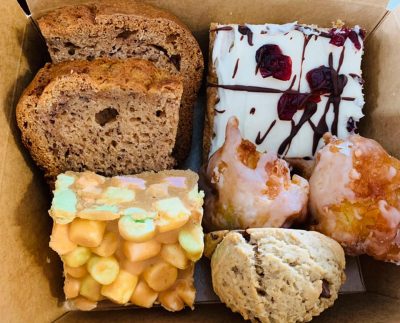 Kuugaq’s goodie boxes are on display at Kalgen’s from Monday to Friday. (Photo courtesy of Kalgen’s)

“The community has been very supportive of what we’re doing and they understand what small businesses are, so we feel it makes sense that we give back,” Rostant said.

When customers pay their bills, they have the option to contribute a bit extra to help with the distribution of food to essential workers in town.

After the recent mass shooting in Nova Scotia, a large delivery of chilli and baked goods went to the RCMP detachment’s members. A bakery in Newfoundland also contacted the Kuugaq because it wanted to give a gift to the police in every province and territory.

Meanwhile, to stay in business, the Kuugaq is hoping to tap into some of the federal emergency money for small businesses.

The worldwide crisis has created another level of difficulty in running a business in the Arctic, the couple said.

“We’re going further down this road, hoping that we’re going to be able to tap in[to] federal help,” Rostant said. “But are we just going further into debt, with the realization coming later that, ‘Oh, we have to close?'”