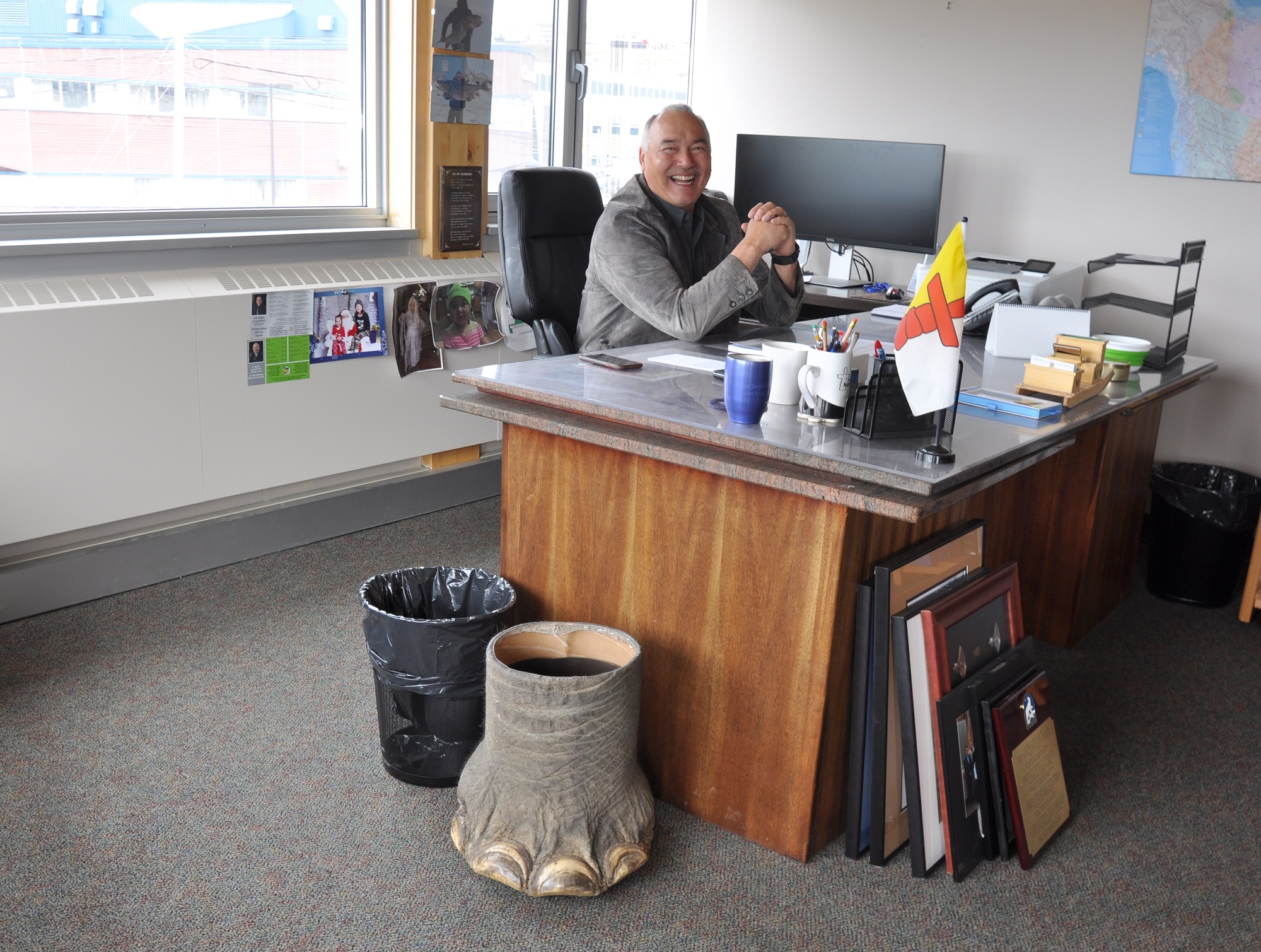 Nunavut Premier Joe Savikataaq sits at his desk in his office on the top floor of the legislative assembly building in Iqaluit. Next to his desk sits one of his hunting trophies, a wastebasket made from an elephant hunted by his son, Joe Jr., on a hunting safari the pair went on in Zimbabwe. (PHOTO BY SARAH ROGERS) 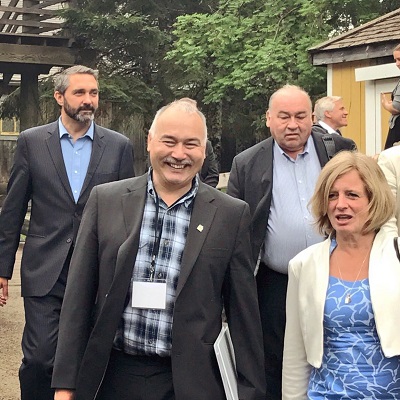 In the late summer of 2013, Joe Savikataaq stood on the shore of western Hudson Bay in a T-shirt and jeans, his hands pushed into his pockets, and talked about his plans for Nunavut.

He was then a wildlife officer and Arviat hamlet councillor, making his first run for territorial politics, to serve as MLA for Arviat South.

That October Arviat voters elected Savikataaq, a soft-spoken but engaged MLA who championed better education outcomes and hydroelectric power for the Kivalliq region.

Almost five years later, he’s become Nunavut’s new premier, sitting at a desk in his bright and spacious corner office on the top floor of the legislative assembly building in Iqaluit.

“Back then when I first ran, I didn’t have aspiration of being a minister at that time. I just wanted to be a regular MLA,” Savikataaq said.

“You get to know what it’s like and what questions they might ask. But I just found that I should go to the next step so I could contribute more to Nunavut and get what I think should be done, easier.”

That next step was a big one, and a first for Nunavut, when MLAs voted to remove Paul Quassa as premier this past June.

Savikataaq is hesitant to talk about the details that lead to the then-premier’s removal. He said he heard MLAs use terms like “autocratic” and even “dictatorship” but stressed those aren’t his own words.

“It was obvious the way the vote went that both regular members and cabinet were having trouble with his leadership style and the way he ran the government,” Savikataaq said.

“If you want to get anything done, you gotta make sure that everyone’s on side and you all sing the same tune, to the federal government or whoever you want to get your results from.

“We have enough challenges, that we don’t need to work against each other.”

As premier, Savikataaq, 57, is still reserved in his speech, almost shy, but thoughtful in the way he answers questions. He’s traded the T-shirts and jeans of his past career for a suede coat and comfortable slacks.

His first item of business, he said, was to surround himself with a capable team of staff “who could work with each other.”

Savikataaq brought in Virginia Mearns as his principal secretary and the Government of Nunavut’s director of communications, Cate Macleod, as his press secretary, while his previous executive assistant, Ron Elliot, stays on in that role.

“The government’s mandate hasn’t changed,” he said, referring to Turaaqtavut, drafted by MLAs earlier this year.

“We had a little bit of a shake-up,” he said. “We have a new premier, but the sky’s not falling here.”

As premier, Savikataaq may be called to defend Turaaqtavut—as Quassa did—from criticism that the mandate is vague and lacks details on how the government should achieve its priorities.

“[Turaaqtavut] is what everyone agreed on,” he said. “It would be foolish to change that mandate, because we’d lose another four to six months, and four years isn’t a long time to get stuff done.”

For his part, Savikataaq has narrowed his own plans to three goals he considers pressing to address over his mandate.

The premier wants the territory to improve its capacity to provide elder care and addictions treatment at home. Both projects are the subject of current studies.

Savikataaq said this government also intends to secure more funds from Ottawa for social housing, a need which is directly linked to the type of health care he wants to see in Nunavut.

“You can’t really address mental health issues that are there if you still have overcrowding at home,” he said. “You have to treat it as whole.”

There, Savikataaq said he tried to impress on new and veteran premiers the territory’s special needs, particularly around funding for new infrastructure.

“An example I brought: if we miss the sealift, it could mean that a project is delayed by a year,” he said.

“We have special circumstances here where we should have a bit of flexibility.”

The same can be said for Canada’s carbon tax, which Savikataaq stressed will not get its “desired results” from the territory with the highest cost of living.

Before the legislature sits again in October, the GN will get to work on two major policy projects.

First, education officials will embark on community consultations on how the GN should amend its Education Act a second time, after Bill 37 failed in the last government’s mandate.

Savikataaq sat on the special committee that drafted the original amendments, and that bill’s failure remains a disappointment.

“I feel it was a loss for Nunavummiut to not get an explanation of why they didn’t support it,” he said.

“Even if you disagree with a law, you should debate it so those views come out and Nunavummiut will be informed.”

Moving forward, Savikataaq said the government has to work on the issues that drew the greatest opposition, like proposed plans to push the timeline for introducing Inuktut as a language of instruction from kindergarten through Grade 12.

“They have to see if they can work with Nunavut Tunngavik Inc. and stakeholders and either change amendments so they’re happy, or smooth them over,” Savikataaq said.

By the fall, the GN should also have developed regulations to address details of its cannabis legislation, namely, home cultivation, before recreational marijuana become legal across Canada Oct. 17.

The question of how to regulate home cultivation of marijuana has been a challenge for Nunavut lawmakers, in a territory with so many large families living in overcrowded homes.

“It’s going to be a learning experience too,” Savikataaq said. “It’s so brand new—there might be stuff in there we haven’t even thought about.

“But it’s a lot easier to make and change regulations than an act, so I believe that’s the way it was done so we could be more reactive to challenges that come up by addressing them to regulations.”

Savikataaq has another claim to fame: he is the territory’s first Kivalliq premier, though he said that won’t affect his approach to policy.

“You might have subconscious bias that comes out from time to time, but I believe I’m a fair guy,” he said. “I’m the Nunavut premier and all regions will be treated fairly.”

What’s different is how he’s received when he returns home to the region. In Arviat, Savikataaq spends a lot of time stopping along the road or in the grocery store, shaking hands with residents.

In a small window of time before his schedule picks up again, the premier is heading home to work on his cabin, 80 kilometres north of Arviat, and to spend some time with his grandchildren.

With his new role—and a smartphone attached to his hip—he said he doesn’t expect to have much downtime, but he said he intends to finish what he started.

“The only time you’re not in contact is out on the land,” he said. “I hauled all the material there this spring, so it has to get done.”