“Every year we see changes, disturbing changes, in front of our eyes” 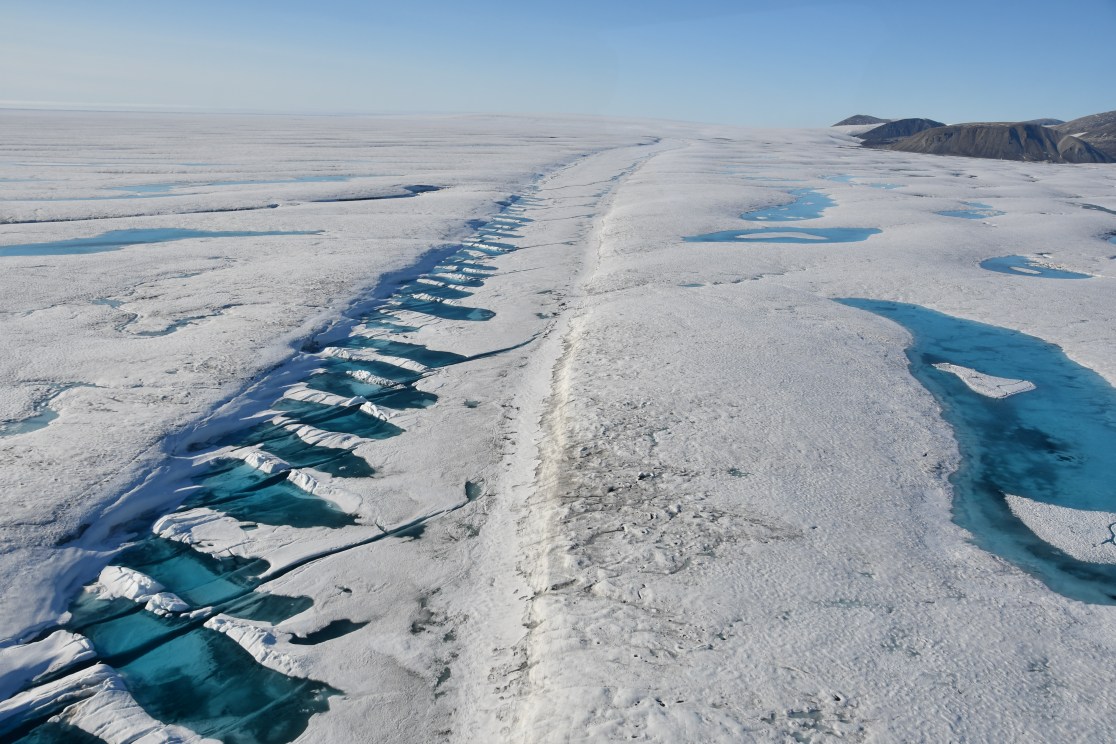 The Milne Ice Shelf is seen before its collapse last summer. Warwick Vincent, a biology professor at Laval University who has worked in the Arctic for more than two decades, say such dramatic changes point to the need for greater protection for parts of the Arctic that will be the last to hold on to sea ice as the world warms. (Photo courtesy of Derek Mueller)

When Warwick Vincent, a Laval University biology professor and a Canada research chair in aquatic ecosystem studies, first visited northern Ellesmere Island in 1998, it looked a lot different from the way it looks today.

He vividly recalls seeing the Markham Ice Shelf that was as wide as Manhattan and 10 storeys tall, which has since broken up.

“We flew out there in 2007, did some preliminary sampling, came back with the team in 2008 and it had gone, vanished completely,” said Vincent, who has worked in the Arctic for more than two decades.

“Every year we see changes, disturbing changes, in front of our eyes.”

It’s a shift Vincent says isn’t even reflected on official maps of Canada currently in use.

Last summer’s collapse of the 4,000-year-old Milne Ice Shelf, which was 50 per cent larger than the Markham Ice Shelf, was the latest of those changes.

Although Vincent and other scientists have yet to return to the region to see that loss for themselves, due to the COVID-19 pandemic, they’re sounding the alarm in a new commentary published last week in the journal Science.

“This sudden attrition of a thick Arctic ice shelf harbouring diverse animal and microbial communities is one of many recent events along Canada’s far northern coastline that underscore the vulnerability of polar ice habitats to ongoing climate change,” said the commentary, co-authored by Vincent and Derek Mueller, a Carleton University geography professor.

This region is significant because it contains the oldest and thickest sea ice in the Arctic Ocean.

It’s also significant because come 2040, when climate projections forecast the total disappearance of summer sea ice, it will be the last area with ice, making it an “ultimate refuge” for ice-dependent species, including some organisms that have not been found anywhere else.

Even with the “disturbing” changes seen over the last 20 years, “this last ice area is still the most resilient place for summer sea ice, and as a consequence, it’s of value at a global level, at a planetary level, and it needs conservation,” said Vincent.

The desire to preserve this unique region is not a new one. The World Wildlife Fund, which also coined the name “last ice area,” has advocated for increased protections for nearly a decade.

Some protections do exist, such as Quttinirpaaq National Park on northern Ellesmere Island and the Tuvaijuittuq marine protected area, which was established last year through a partnership between the Qikiqtani Inuit Association and the Government of Canada.

Tuvaijuittuq, or “the place where the ice never melts” in Inuktitut, is the first marine protected area to be designated for interim protection, meaning human activities there are limited until 2024.

For Vincent and Mueller, the creation of Tuvaijuittuq, which is roughly the size of Poland, is an “extraordinary gesture” on the part of QIA and the Canadian government, particularly at a time when places like the United States are looking at opening up their Arctic refuges for oil and gas exploration.

Next, Vincent and Mueller want to see this protection made permanent.

While QIA is currently working on a feasibility study that looks at more permanent protections for Tuvaijuittuq, it’s a multi-year process that has been delayed by the challenges of the pandemic, particularly around work involving community consultations in Arctic Bay, Pond Inlet, Clyde River, Resolute Bay and Grise Fiord, said Neil Kigutaq, a senior Inuit stewardship manager with QIA.

In addition to community consultations, the study will also consider ecological, economic and socio-cultural factors, resource assessments, Inuit Qaujimajatuqangit, climate change and the historical use of the area.

As a marine protected area, Tuvaijuittuq protects some of the waters in the last ice area, including ice shelves, but those are only part of the region’s rare ecosystem. 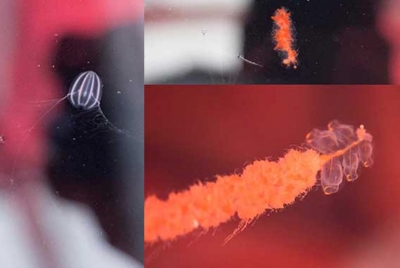 In addition to the last ice area being a refuge for some of the Arctic’s more iconic species, such as polar bears, walruses and seals, the unique ecosystems are home to small animals, like those pictured here, and microorganisms, some of which have not been found anywhere else. (Photos courtesy of P. Coupel & P. Tremblay, Fisheries and Oceans Canada)

“[Tuvaijuittuq’s] awesome, but it doesn’t go onto the land,” said Mueller, who explained that there are also ice-based ecosystems, dependent on the land, like one that he and his colleagues had recently discovered on the Milne Ice Shelf prior to its collapse.

The ice shelf acted as a sort of natural dam by trapping meltwater at the head of the fiord, creating a rare epishelf lake. From there, the lake drained into the ocean by way of a channel that was carved through the bottom of the ice shelf. It was in that channel that Mueller and his colleagues found “a truly unique ecosystem of bottom-dwelling animals,” including scallops and sea anemones that were nourishing themselves with sediments that came from the fiord and were drifting by in the current.

Vincent and Mueller are also calling for protections to be expanded geographically east and west across the entire thick ice zone, which includes Greenland.

In 2017, the Inuit Circumpolar Council proposed that the North Water Polynya, or “Pikialasorsuaq” in Inuktitut, an area of ice-free water, which lies between Greenland and Nunavut, should be managed and protected by an Inuit-controlled authority.

While the establishment of such a protected area continues to be a work in progress, the glaciers that feed the North Water Polynya are rapidly retreating.

Both Mueller and Vincent understand that only localized protections for these resilient, yet vulnerable, ecosystems aren’t enough.

“Meeting the Paris Agreement carbon targets is essential to avoid abrupt future change,” they state in their article.

The final Paris Agreement text states that nations commit to “holding the increase in the global average temperature to well below 2 C above pre-industrial levels and pursuing efforts to limit the temperature increase to 1.5 C.”

In the Arctic, that temperature rise is expected to be two to three times more.

Mueller likened the situation in the last ice area to that of the Amazon rainforest.

“We see it’s burning more rapidly than ever and it’s being cut down … and we think about that as a conservation goal. I would say this is also important as that in that same breath,” he said.

“We have special places on earth and this one has the chance to be the last refugium of some of these ice-dependent species and ice-dependent ecosystems.”