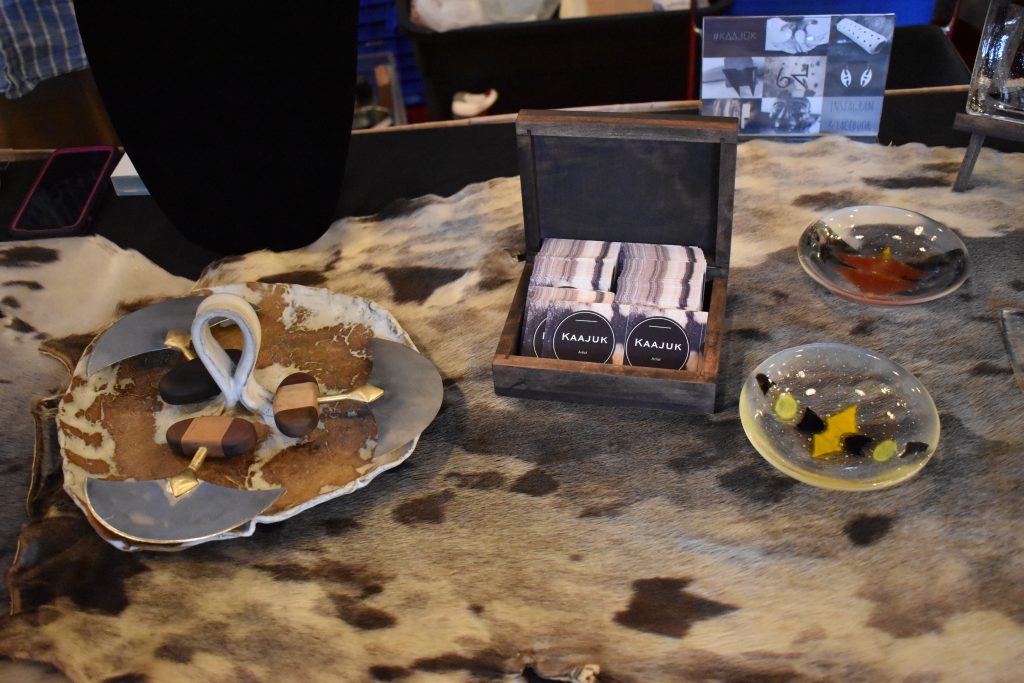 Inuit designer Kaajuk was one of many artists with a table at Inuit Tapiriit Kanatami’s Inuit Marketplace in Ottawa on May 15. (Photo by Kahlan Miron)

Need a little sealskin on your shoes? How about wine cozies with an Arctic flare? 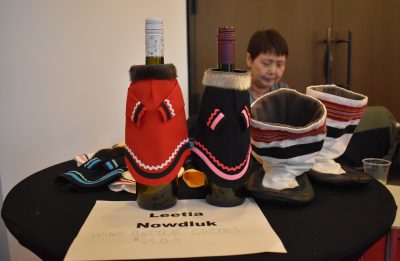 All kinds of crafts and products were presented at the Inuit Marketplace, like these wine cozies from Leetia Nowdluk. (Photo by Kahlan Miron)

Last month, Inuit Tapiriit Kanatami made all of Ottawa’s northern dreams come true with an Inuit Marketplace. The city’s National Arts Centre set up shop on Wednesday, May 15, with a spread of tables that brought eager customers in search of Inuit goods.

Racks were filled with sealskin leather jackets, while a mannequin sported a sealskin top. And displays offered everything from ulu earrings to ulu necklaces to actual ulus.

The room was packed, and with names like InukChic (who is based in Ottawa), Iqaluit’s ENB Artisan and the Craft Council of Newfoundland and Labrador, there’s no questioning why.

A display of Inuit skill and artistry, ITK’s Inuit Marketplace made a perfect companion to their A Taste of the Arctic event later that evening.

And, in addition to celebrating community and Inuit talent, the market was also a refreshing touch of home for many of the artists who have moved south.

April Pigalak of Upinngaaq Designs, who is known for her sealskin bags, said the event reminded her of craft markets from her home community of Kugluktuk. Pigalak liked being able to socialize while marketing her business, and connected with a lot of familiar faces. “It just felt a very welcoming and positive atmosphere,” Pigalak said.

Pigalak moved to Ottawa a few years ago. She says that the cost of living in Nunavut made it difficult to start a business there, and that she now has easier access to affordable supplies. In Ottawa, Pigalak says she’s fortunate to do what she loves.

And Pigalak isn’t alone: “A lot of other Inuit artists are here in Ottawa as well.”

Melissa Attagutsiak of Nuvuja9 is one of those artists, having moved to the Ontario city from Iqaluit. The jewellery and clothes designer also had a table at ITK’s Inuit Marketplace, and presented at the Ottawa National Seal Product Day event on May 14.

Access to fabrics and tools influenced Attagutsiak to move as well. But the designer enjoys how much easier it is to travel when based in Ottawa too—so far she’s been to Edmonton, Toronto and Paris, and hopes to make it out to British Columbia.

Even so, “it’s really hard to be away from home,” Attagutsiak said. “I really miss it there, my son’s there.”

For Pigalak, ITK’s marketplace was also a change from some other Ottawa markets. “When you go out to a market in the south, you have a lot of people who might not have ever held a sealskin product in their hand.” 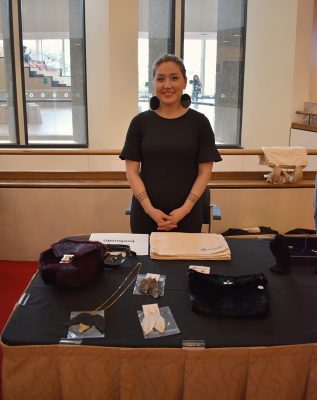 Pigalak says she’s gotten negative comments before, and that when she goes to markets or leads workshops in Ottawa people often come in with preconceived ideas on the use of sealskin. But Pigalak says she’s good at being patient and educating people. It’s “just showing the world a different part of what this whole sealskin industry is.”

Even so, there are still large Ottawa markets she’s not comfortable trying.

Attagutsiak has also had some strange experiences, even with most of her clients being Inuit: at a fashion show, Attagutsiak wore clothes with sealskin on the shoulders and people started to pet them. “It’s like pregnant people, when people just come up and touch their belly, they’re like harassing my shoulders.”

Both artists believe there’s some change in the larger perception around sealskin, however. Attagutsiak credits the movie Angry Inuk for changing a lot of minds and Pigalak notes that sealskin prices have gone up.

But in the meantime, markets like ITK’s are a great way to bring together artists and those that appreciate sealskin designs, said Pigalak.

“It was great seeing other artists and then great seeing that there was such a support for sealskin products,” she said.