“I know someone is going to die soon outside here” 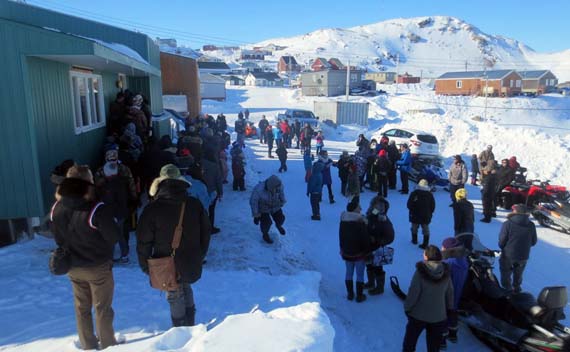 The wellness centre in Kimmirut is one place where people who are homeless try to get some sleep in the community. (File photo)

A woman living in Kimmirut is calling for the creation of a homeless shelter in the Qikiqtani community of about 400 people.

The woman asked Nunatsiaq News to refer to her as Sara in this article, fearing backlash from the community for asking for help.

Sara has no home currently and couch surfs when she can, but on most nights that is not possible.

With ongoing overcrowding in the community, she and others who cannot afford Nunavut rents, or cannot get public housing immediately, have been left with few options in a community that has no emergency shelter.

She says her family and friends have too many couch surfers already.

“My brother froze to death and so did my cousin in the last few years,” Sara told Nunatsiaq News on Wednesday, Jan. 30.

She said she has heard about someone nearly freezing to death recently in Kimmirut but who was found in time to get medical treatment. The RCMP say they have no knowledge of that happening.

With news of a teenage Inuk’s death from exposure recently in Salluit, Sara is scared.

She wants to see smaller communities get the funding and shelter options that Iqaluit gets.

Or she’d like to see one of the empty GN staff buildings re-purposed as a shelter at night, at least in the winter.

“I know someone is going to die soon outside here,” said Sara.

“And I really think it is going to be me.”

Sara says she had been sleeping in the social workers’ offices during the day until they close, and then walking outside throughout the night until offices open in the morning.

About five nights a week, she needs the social workers’ help to find a place to sleep or she stays outside, Sara says.

She said she has spoken with RCMP officers, social workers and the mayor to try to express the need for a Kimmirut shelter—even a temporary one, but the request seems to fall on deaf ears.

The acting minister responsible for homelessness, David Akeeagok, contacted on last Thursday afternoon, did not respond to a request for comment before publication.

A statement from the Nunavut Housing Corp. acknowledged the issue of homelessness and said that it is doing its best to combat it with its ” priority-based points system.”

Under that system, anyone who has a criminal history, debts or has caused past damage to public housing may not be eligible for housing.

NHC said plans are in the works to build more units spread over 25 communities. This will be done with federal funding sprinkled out annually over 10 years.

There were 47 people waiting for public housing in Kimmirut as of last March 31, according to an NHC background document dated Sept. 28, 2018.

Between 2019 and 2020, seven communities will be allocated either 10 or 20 units, starting with Iqaluit.

Talayoak, Naujaat, Whale Cove and Kimmirut are ranked as the highest in need of the communities that will get no new buildings before at least 2020.

“There are a number of steps a community must take before the department can consider funding a shelter,” said Tracy Wood, a policy analyst at the Department of Family Services.

“If a community needs guidance working through the steps, the department can be available to assist.”

Two big requirements are that community members identify an existing building “to support a shelter” and demonstrate their “capacity to take on and manage a shelter,” said Wood.

She encourages communities to work together on that goal.

“We will work with communities who have identified a need,” said Wood.

Out from the cold, for now

Sara says she was told to leave the clinic in Kimmirut when she tried to sleep there “because it looks bad.”

However, she confirmed that the day after Nunatsiaq News’ requests for comment went out, the Department of Family Services spent the day with her working to find a short-term solution.

By the evening, she said they were able to get her a temporary spot in a home for two weeks.