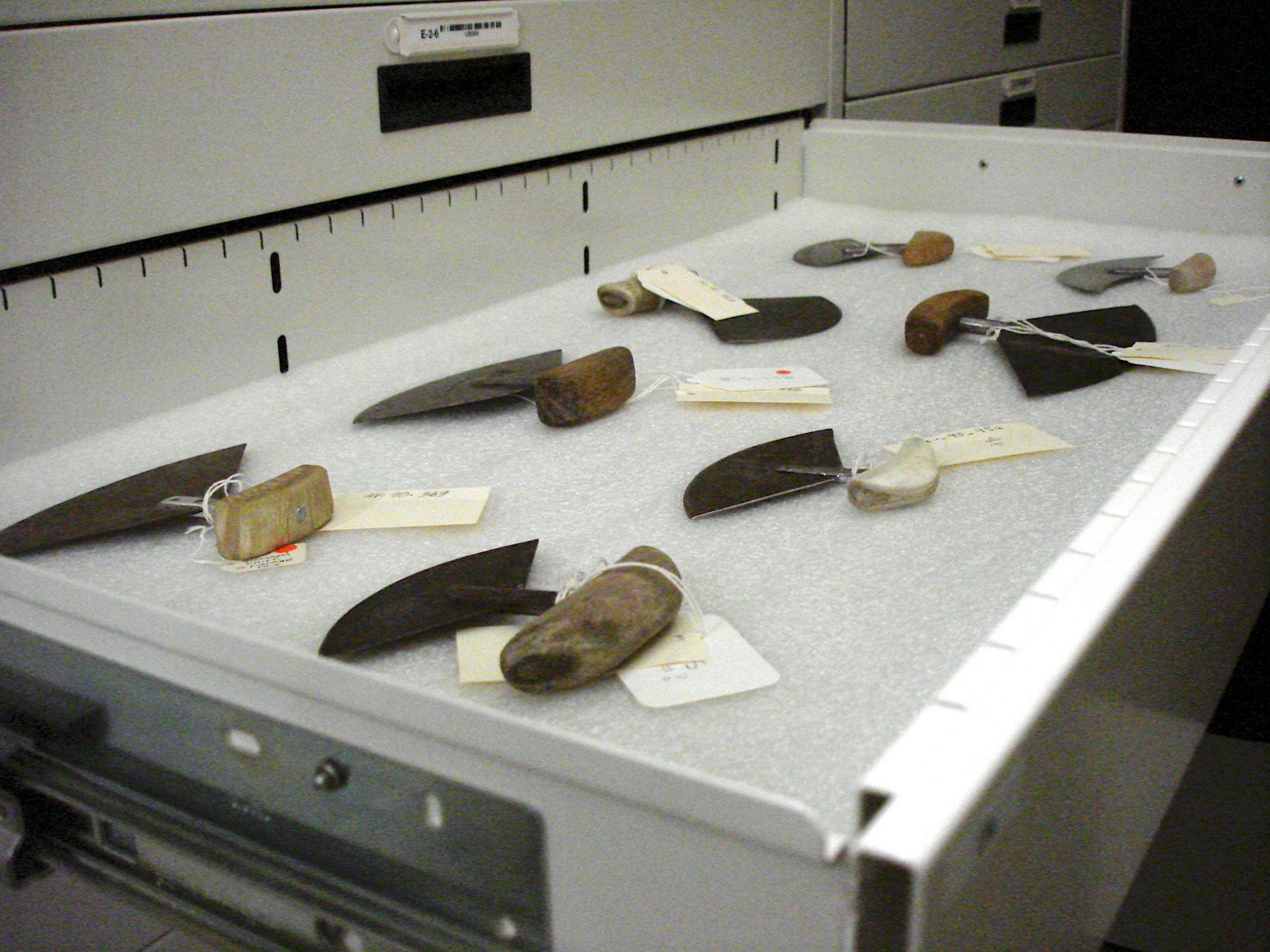 This collection of ulus is currently being stored in Montreal by the Avataq Cultural Institute. (Photo by Jane George)

Its Montreal office at 4150 Ste-Catherine St. has been closed since March, and won’t open again until Sept. 1.

But during this closure, caused by the COVID-19 pandemic, Avataq opted for a new path, which its board says will lead the cultural institute back north, sooner than later, according to Avataq’s longtime executive director, Robert Fréchette.

This year Avataq didn’t apply for any money from Quebec, Fréchette said: the board of Avataq, led by Josepi Padlayat of Salluit, has decided it wants to focus more on “Inuit priorities” and bring the entire organization closer to Nunavik.

This need was brought home when tight restrictions on air travel to and from the region, along with quarantines, separated Avataq’s operations from Nunavik, Fréchette said.

So Makivik Corp has stepped up to support Avataq.

This is not first time that Makivik has lent support. In the late 1990s, Avataq, which did not exist when the James Bay and Northern Quebec Agreement was signed in 1975, was strapped for cash.

But after that rough period, Avataq started to receive money from various government sources, with more than $1 million over three years coming from Quebec. The institute also took on a number of high-profile projects, including the promotion of its Inuit herbal teas.

The Makivik funding now means Avataq will be able to move away from the kinds of short-term projects such as books, which Quebec has liked to support, and concentrate on larger projects, Fréchette said.

These include lobbying for the Qajartalik rock carvings near Kangiqsujuaq to be protected as a World Heritage Site, working towards a Nunavik language authority, and moving art collections north into a museum.

The new plan and tighter finances at the cultural institute mean some Montreal-based employees who been with Avataq for years learned last month that they would no longer be with the organization after Sept. 1.

It’s uncertain whether the Inuktitut language courses or the Nunavik Sivuniksavut program will continue to take place in the current Avataq office.

Before the pandemic, plans were underway to see Avataq move into a space on Crescent St., which is owned by the Montreal Museum of Fine Arts.

The rent would have been $1 per year for Avataq, but the cultural institute would have had to pay for the renovations, Fréchette said.

The renovations, which would have cost roughly $2 million, were to have been finished in 2021.

The ideas behind the move, according to online documents, included securing Avataq’s long-term presence in Montreal, promoting Inuit art and culture, and fostering dialogue and research on Inuit art among experts and community organizations.

That collaboration is still in the works but, due to the pandemic, the idea has been transformed, Fréchette said.

Now the more immediate goal is to move Avataq north to a cultural centre of its own, so the new Crescent St. space would become more of a space for Inuit culture in the city, he said.

Avataq, which was created in 1980, officially opened its offices in Montreal in December 2013.

The head office of the institute was located then, as now, in Inukjuak, but, “for reasons of efficiency and economy,” Avataq chose to locate its administrative offices, archives and collections in Montreal, a Quebec government news release said at the time.

Now, Avataq is making another choice—one that Fréchette said goes well with the increased autonomy Nunavik wants to see for the region.