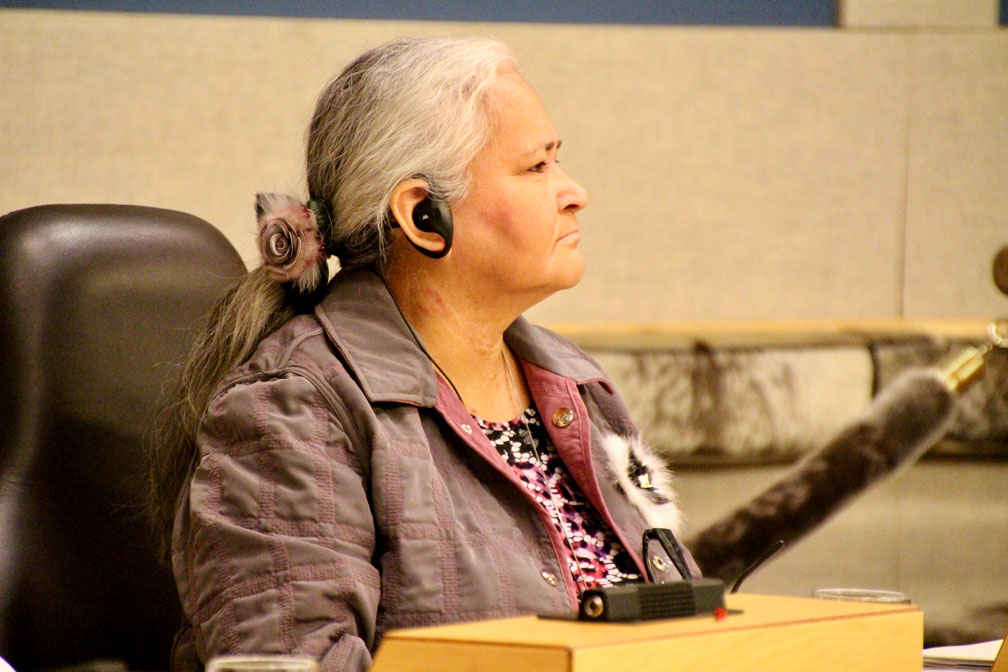 While Nunavut’s minister of Family Services told the legislative assembly last week that there are three shelters in the territory for women fleeing violence, on Monday morning the department explained that there are actually five.

After the release of Nunavut’s budget this week, which officials say places a focus on wellness and social issues in the territory, regular MLAs have been pushing ministers to provide details on plans in store for women’s shelters, safe houses and transitional housing projects.

At the time, she said there were three and did not say where they were located.

However, on Monday, Alison Taylor, Family Services’ director of policy and planning, sent Nunatsiaq News a statement that the correct number is actually five, and that they are located in Iqaluit, Rankin Inlet, Cambridge Bay, Kugaaruk and Kugluktuk.

On Thursday, Sheutiapik had also explained that all 25 communities have a safe house for women.

“The communities have private homes that are not publicly stated that they could be a safe home to go to if need be temporarily,” said Sheutiapik.

The safe houses are just not advertised for privacy reasons, Sheutiapik said, but the hamlets and RCMP are aware of them.

But, on Monday, Taylor corrected that as well.

“There are currently four safe homes across Nunavut that are funded by the Department of Family Services—Igloolik, Arviat, and two in Pond Inlet,” said Taylor, adding that this number fluctuates.

Typically, women can stay in department-funded safe houses for seven days, but in some cases Family Services can help to create a longer plan.

As well, Iqaluit-Niaqunnguu MLA Pat Agnakak brought up concerns about financing for shelters in the territory, starting with the plan in the works for a men’s transitional housing program in Iqaluit.

Currently, the Government of Nunavut contributes approximately $10,000 a month towards the rent of the house used as Iqaluit’s men’s shelter, Agnakak said.

She asked Sheutiapik what the GN will provide to support the Uquutaq Society’s transitional housing project.

Sheutiapik said that her department meets regularly with the society, the mayor and other stakeholders involved with the project. But at this point she does not know how much money the GN will provide because the board itself does not know what it needs.

“It really hinges on this support for the project to be successful,” Agnakak said.

“Without that kind of financial input, I think it is going to be very hard.”

If the Uquutaq Society manages to acquire a larger building, Agnakak said, it would allow them to provide the “much-needed programs and services.”

Currently, the men at the shelter have to leave each morning, because the building is too small to provide training or counselling inside, Agnakak said.

The rooms are filled to capacity with bunk beds and couches for the men to sleep on. One tiny bathroom is often shared by about 50 men in the winter.

Agnakak asked the minister how her department will assist the Uquutaq Society to train staff to provide these services to men’s shelter clients.

The government should be proactive, said Agnakak.

“That response kind of makes me think the department sits back and waits for people to come to them,” said Agnakak.

“I think you are very aware of the need for the Uquutaq shelter. I think everybody knows, even if you are not from Iqaluit. It has been in the news a lot.”

Cate McLeod, the Nunavut premier’s press secretary, said at a budget lock-up on Wednesday, Feb. 20, that the emphasis of this year’s budget is on wellness for the most vulnerable.

For that reason, there is a $2-million investment in the budget to improve services at emergency shelters and plan potential transitional housing options for women and children.

Of that $2 million, about half is going to top up the societies to run shelters, for capacity and programming.

“$800,000 is going to create additional support through family violence and training initiatives, and $120,000 will go to support to Qulliit Nunavut Status of Women Council,” said Lindsay Turner, Nunavut’s director of poverty reduction, on Feb. 20.

As well, this funding will cover hiring a GN transitional housing coordinator, who will work with the partners in developing a model for Uquutaq’s plan, and also one for women.