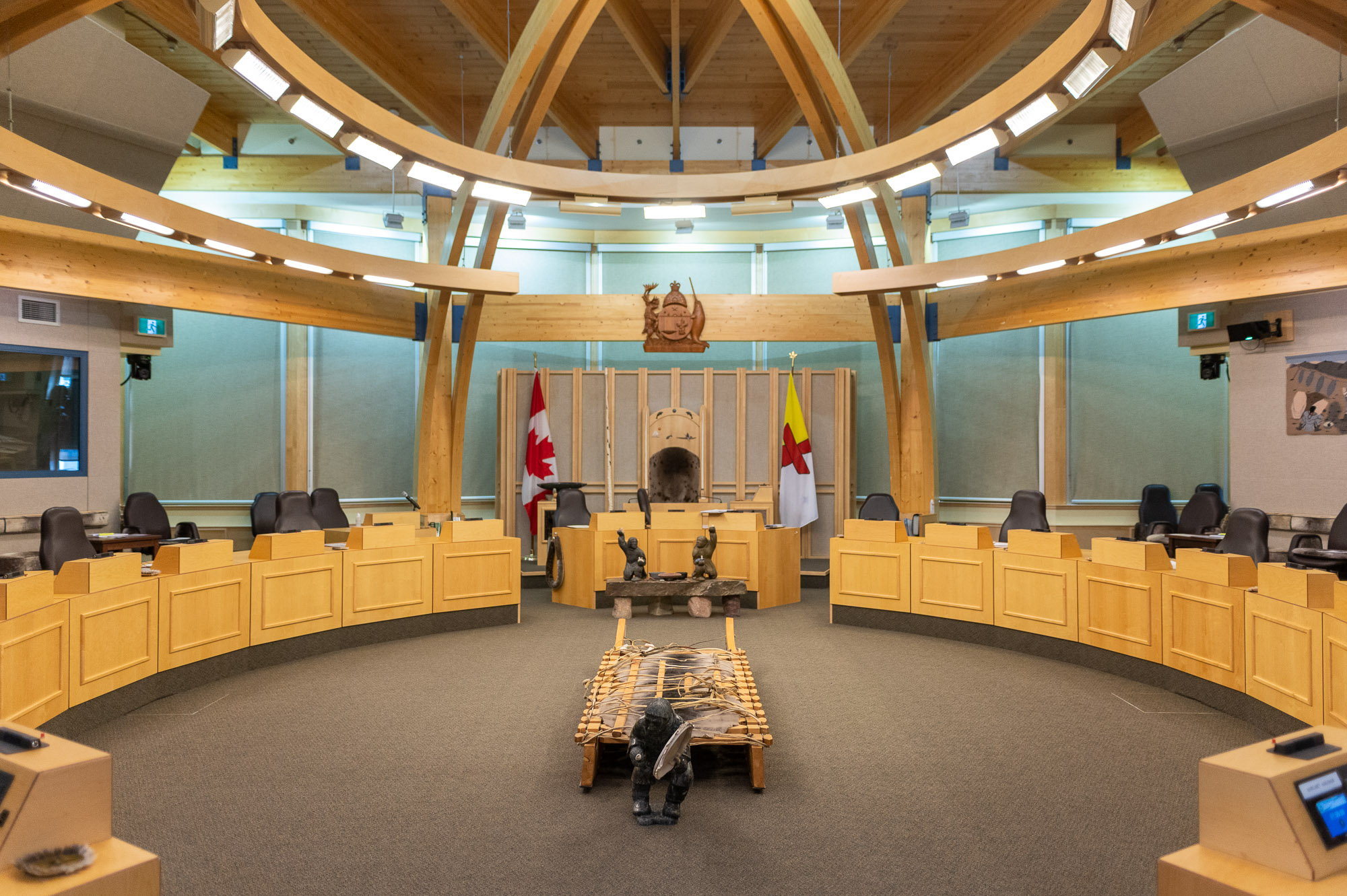 Less than a month after concluding their pandemic-focused special sitting, Nunavut’s MLAs will once again return to the chamber of the legislative assembly for a 12-day sitting that begins on Wednesday, Oct. 21, and will run until Nov. 5. (Photo by Dustin Patar)

Nunavut’s MLAs will once again file into the chamber of the legislative assembly tomorrow to begin their regularly scheduled fall session.

The sitting, which comes less than a month after their pandemic-focused session, begins on Wednesday, Oct. 21 and will run until Nov. 5.

Despite his initial feelings of eeriness associated with the protocols, Speaker Paul Quassa came around.

“I was very surprised,” he said, “it worked very well.”

Aside from the continued safety measures, the upcoming sitting will be more of a return to normalcy, with the focus once again being on capital spending, just as it is every fall.

Members will go department by department, line by line over Bill 51, the Supplementary Appropriations Capital Act for 2021-2022.

Of the major projects that the Government of Nunavut currently has underway, John Main, MLA for Arviat North–Whale Cove and chair of the regular members’ caucus, says he expects that the Nuuk-Iqaluit fibre optic line project will come up.

“They actually didn’t ask for any new money last year, so I’m expecting that they’ll be asking for more money this year,” said.

“When the project was first introduced, they went from a ballpark cost of $125 million to over $209 million and so when you see that type of jump in one year, it’s very concerning.”

When asked whether other projects might see similar pushback, Main said, “that’s a reasonable assumption.”

Unlike previous years, members won’t be considering any supplementary appropriation acts from previous years or a writeoff of assets bill, as those were already passed last month.

During the upcoming sitting, members will also consider seven other bills.

The Department of Health will introduce Bill 57, the Tobacco and Smoking Act, which seeks to expand areas that are currently off limits to smoking, toughen the rules for the sale of vaping products and ban the sale of all flavoured tobacco products.

As mentioned by Justice Minister Jeannie Ehaloak in June, Nunavut could see a new model for civilian oversight of the RCMP through Bill 53, an Act to Amend the Royal Canadian Mounted Police Agreement Act.

The Department of Finance will introduce Bill 56, the Liquor Tax Act.

The City of Iqaluit may have more control in terms of how lots are assigned and made available if Bill 58, an Act to Amend the Cities, Towns and Villages Act, is approved.

“It would allow the city to make more distinctions among residents and their land administration bylaw,” said Lorne Kusugak, the acting government house leader and minister of Community and Government Services.

In addition to new items on the agenda, MLAs will also continue work on four bills introduced during earlier sittings: Bill 25, an Act to Amend the Education Act and the Inuit Language Protection Act; Bill 35, the Medical Profession Act; Bill 36, the Mental Health Act; and Bill 37, the Legislation Act.

All four bills were given 120-day extensions during last month’s sitting.

Typically once bills have third reading and are approved, the commissioner of Nunavut would give them their assent. However, Nellie Kusugak, Nunavut’s last commissioner, retired in June and a permanent replacement has yet to be appointed and the deputy commissioner is out of town.

According to Quassa, similar to the process that occurred during the last sitting, bills receiving assent will be signified by a written declaration by Nunavut’s chief justice.

Aside from the usual business of budgets and bills, members will be tasked with determining the political future of Patterk Netser.

Two weeks ago Netser was stripped of his portfolios by Premier Joe Savikataaq after making an inflammatory Facebook post about abortion and the Black Lives Matter movement.

“I’m sure the members have a lot to say,” said Quassa, who had just returned from his constituency of Igloolik where he hosted a radio program on the topic to find out how the community felt.

“I think it’s always important on issues such as these to see what our constituencies are thinking of.”

Before being addressed in the chamber, the topic will be discussed by the full caucus in a closed-door meeting.