“This was not only a dream, but it was a necessity” 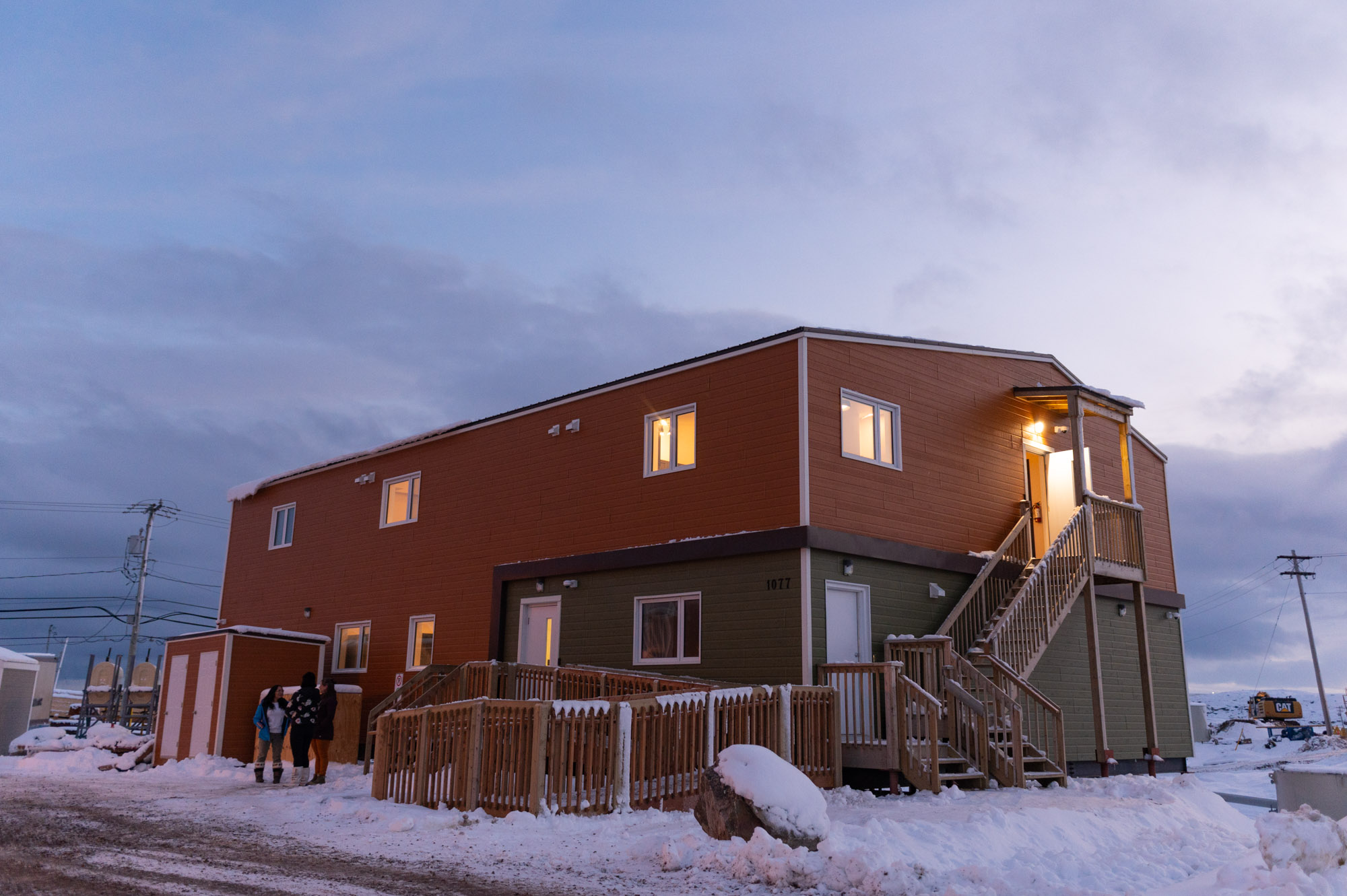 Building 1077, one of two new buildings opened by the Uquutaq Society last week, will house a 30-bed transitional housing program on the second floor and a 30-bed shelter on the first floor. (Photo by Dustin Patar)

After more than two years of development, Iqaluit’s Uquutaq Society officially opened its new space during a ceremony on Thursday, Oct. 22.

The buildings, 1077 and 1079, will house a 60-bed shelter and transitional home, 11 rental units, as well as offices and a programming space.

“This was not only a dream, but it was a necessity,” said former Iqaluit mayor Madeleine Redfern as she addressed the two dozen or so individuals who had gathered to celebrate the opening.

“Those who’ve ever visited the Uquutaq shelter in Lower Base—a four-bedroom unit that has 28 beds and men who were sleeping on the floor, on the chairs, on the couches, in the living room [and] in the hallway—knew that we needed this facility.”

In 2018, over 170 individuals used the shelter, which had two bathrooms and one shower.

Thursday’s event marked the end of a two-and-a-half-year process that began early in 2018 when the Uquutaq Society, then chaired by current Deputy Mayor Janet Brewster, had identified the buildings and had secured a letter of support from the Qikiqtani Inuit Association.

In 2019, the society’s application for the $6.5-million project was approved by the Canada Mortgage and Housing Corporation under the National Housing Co-Investment Fund.

As part of her opening remarks, Stephanie Clark, the outgoing chair of the Uquutaq Society’s board of directors, thanked a long list of people and groups.

Clark also singled out Redfern “for all her efforts in successfully chasing down funding leads at every turn.”

Unlike Uquutaq’s previous building, the new facility will split its bed capacity.

“The vision for this space over here was to give the men who are living in our shelter the opportunity to move into affordable housing and hopefully into homeownership at some point,” said Brewster.

For Brewster, addressing the issue of homelessness is personal.

Reflecting on her experience living in a shelter in Ottawa with her two oldest children, Brewster recalls that the idea of once again being housed seemed impossible.

“It’s not impossible. It’s something that with the support of the community and support of funders that it can happen and today I feel really happy for the men who will be transitioning out of the shelter and into the transitional units and then hopefully into affordable living.”

Although the new program is intended to help residents transition away from using overnight shelter space, it does also mean that the availability of overnight beds will be more limited than it was in the past.

For health and safety reasons, the new shelter will be limited to 30 guests per night.

This shift will create a need for more beds elsewhere in Iqaluit, and beyond.

“This only addresses a tiny, tiny need. It’s only, unfortunately, approximately 60 men in this community, we know the numbers are significantly higher,” said Redfern.

“I strongly recommend that the same people in the same organizations that worked so hard to make this facility a reality can work on building similar facilities or acquiring them in other places.”