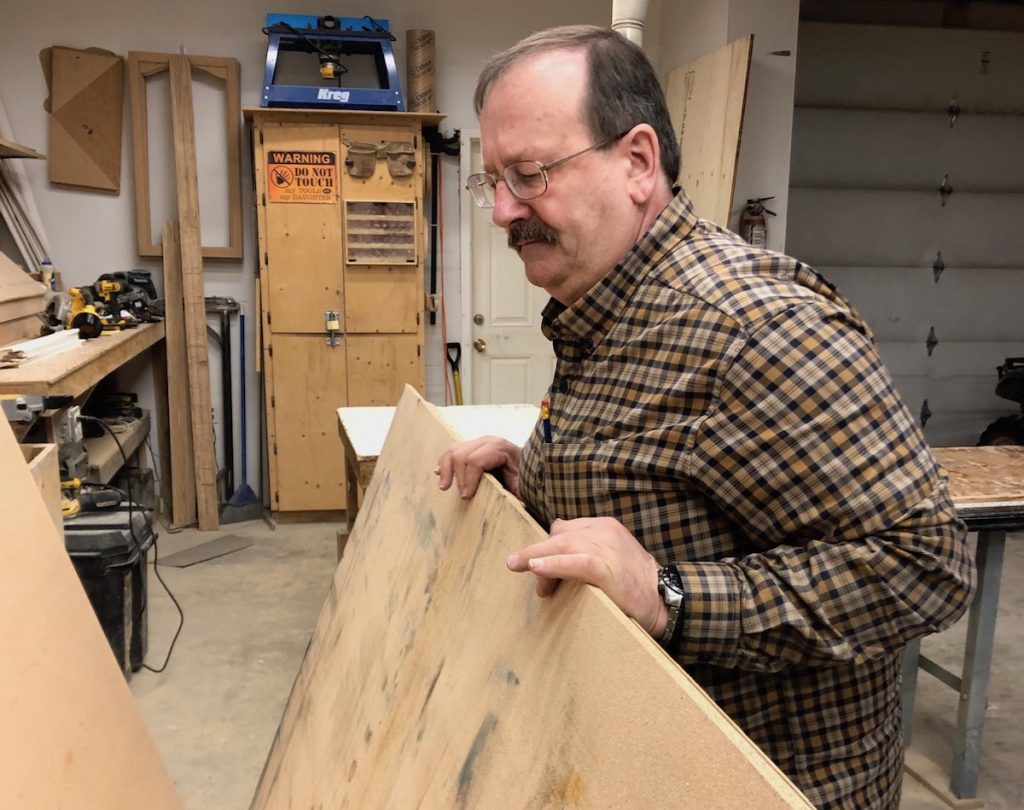 Peter Laube of Kalvik Enterprises Inc. in Cambridge Bay looks at a damaged piece of plywood in his shop. It was part of a big order he placed with Marine Transportation Services last year that never made it into Cambridge Bay. Now he’s suing the company, which is owned by the Government of the Northwest Territories. (Photo by Jane George)

CAMBRIDGE BAY—A second company in Cambridge Bay has decided to sue Marine Transportation Services, owned by the Government of the Northwest Territories, along with six other parties, for damages of at least $1.25 million caused by the cancellation of its barge last October.

A statement of claim was filed last week at the Federal Court in Toronto on behalf of the construction company Kalvik Enterprises Inc.

A similar statement was filed in August by Chou Consulting and Development Inc. of Cambridge Bay, which also claimed at least $1.25 million in damages.

The statement of claim filed for Kalvik lists the Edgar Kotokak, Nunakput and Henry Christoffersen vessels, the GNWT’s Department of Public Works, its minister of infrastructure and MTS as all being responsible for the damages incurred.

They have 30 days to respond to the claim.

The statement of claim also asks for pre- and post-judgment interest as applicable, the costs of the action, and “such further and other relief as this court deems appropriate.”

The statement relates how on May 22, 2018, Kalvik first contracted with MTS for the transport of construction materials from Hay River in the N.W.T. to Cambridge Bay.

In order for the cargo to be eligible for an anticipated delivery date of Aug. 26, 2018, MTS required that the cargo be delivered to Hay River before July 1, 2018.

But following delivery of the shipment to Hay River, MTS advised Kalvik that delivery to Cambridge Bay would be delayed.

The statement of claim cites “multiple representations” from MTS regarding delivery of the cargo “negligently or deliberately, that they knew or ought to have known were untrue” that the cargo, although delayed, would “certainly” be delivered by October 2018.

The cargo was not delivered as contracted for, and the bulk of it was stored at Inuvik.

Although some was ultimately delivered by air to its destination in Cambridge Bay during the winter, the majority of it was stored where it’s alleged to have “sustained significant damage due to the negligence of the defendants.” 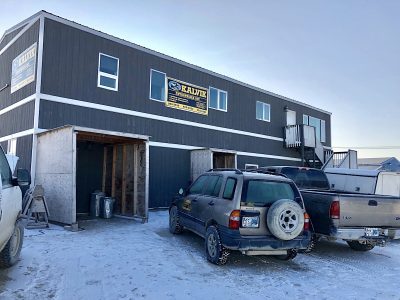 Kalvik Enterprises Inc. in Cambridge Bay, which is owned by Peter Laube, is a general contracting company. Kalvik was one of many clients of Marine Transportation Services who did not receive their cargo in 2018 due to the cancellation of the company’s barge into the western Nunavut hub. (Photo by Jane George)

Oct. 1 marks the date in 2018 when Kalvik’s owner, Peter Laube, first learned that the expected arrival of the MTS barge was cancelled after multiple postponements and that his cargo order would remain in the N.W.T. until 2019.

Fuel, construction supplies, heavy equipment and vehicles were among the supplies stranded on the MTS barge in Tuktoyaktuk, N.W.T.

Some materials arrived in Cambridge Bay on a limited airlift.

But that airlift ended up taking only smaller items from the stranded barge to Cambridge Bay.

To complete Kalvik’s construction projects, Laube said he had to fly in supplies himself, for a total of roughly $60,000 out of his own pocket.

While he continued to work, Laube remained angry about the barge’s cancellation: he put up a sign on his truck during the Kitikmeot trade show urging people not to do business with the MTS.

That was not the first public display of Laube’s anger: last November, at the Cambridge Bay landfill, as they burnt mouldy flooring that MTS had flown in, workers at Kalvik held up a sign saying “Thank-you, M.T.S.”

Laube said this week that that he’s happy to have finally moved ahead with suing MTS and the other parties. He said he felt that MTS has not appreciated the devastating impact of the cancellation and loss of cargo to his company.