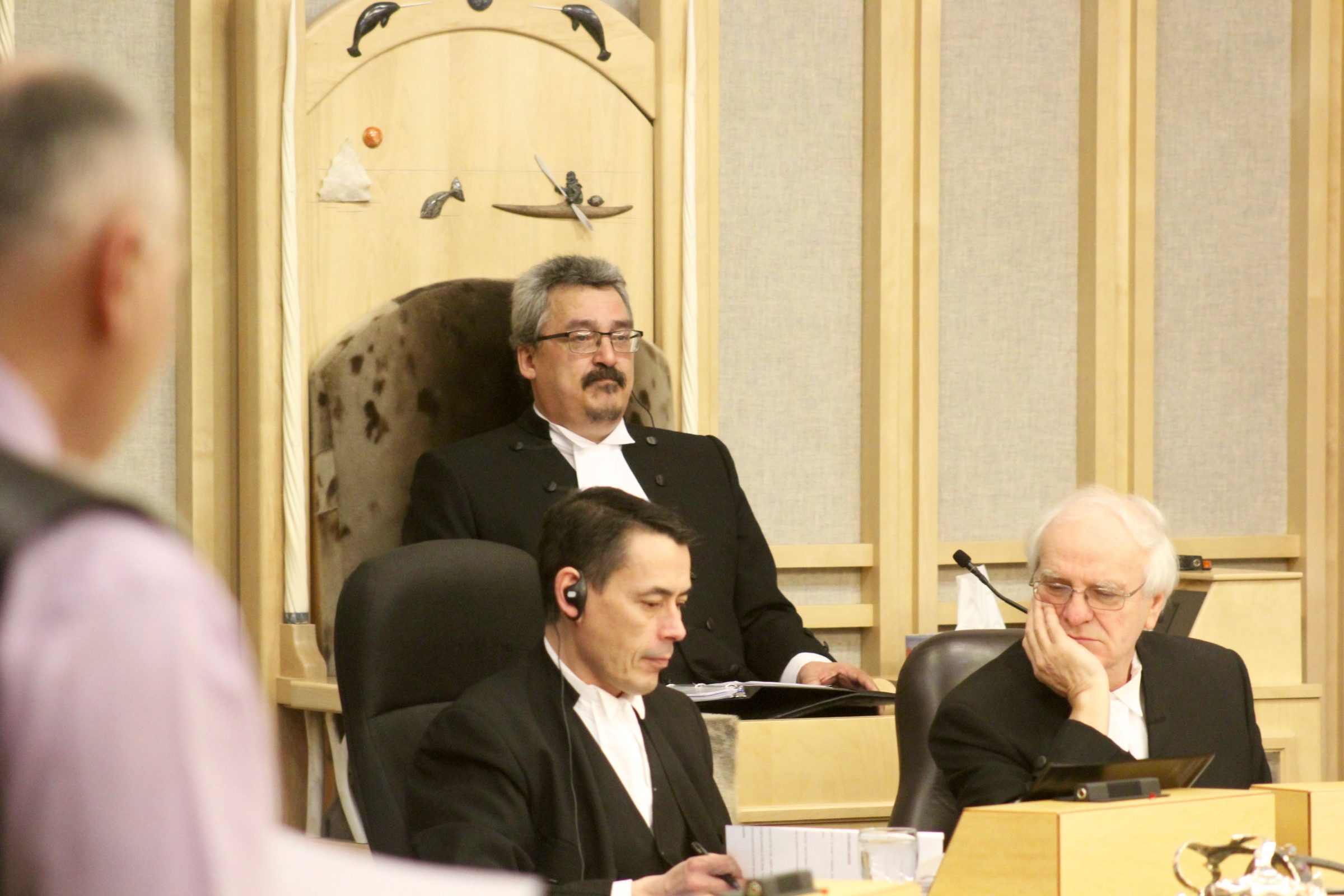 Simeon Mikkungwak, former Speaker of the legislative assembly and MLA for Baker Lake, resigned from his roles on Feb. 24, citing personal reasons. Here, Mikkungwak listens to Premier Joe Savikataaq read a statement on his last day in the Speaker’s chair. (Photo by Emma Tranter)

The winter sitting of Nunavut’s legislative assembly ended with the appointment of a new Speaker, the setting of the highest minimum wage in Canada and the restoration of two traditional community names.

The sitting, which began on Feb. 18 and ended on March 12, began with the tabling of the territory’s 2020-21 operations budget, also known as Bill 39.

Finance Minister George Hickes tabled the $2.2-billion budget on Feb. 19. The biggest item on the budget was $17.6 million towards meeting increased medical travel needs projected for the coming year. Also of note was $1.5 million for six new RCMP members for the territory this year, and six next year.

After much lobbying from regular MLAs during the fall sitting, Jeannie Ehaloak announced on March 16 that Nunavut’s minimum wage would officially increase from $13 to $16 as of April 1, making it the highest in the country.

Earlier in the sitting, on Feb. 24, MLAs learned that Simeon Mikkungwak, Speaker of the legislative assembly and MLA for Baker Lake, was resigning for personal reasons.

That triggered an election for a new speaker, Paul Quassa, the ousted former Nunavut premier and current MLA for Aggu, who was chosen to take the Speaker’s chair after a secret ballot on Feb. 26.

On Feb. 18, Hickes told the legislative assembly that Rankin Inlet would be the next community to get a beer and wine store. The store would open within the year, he said.

To that end, Pat Angnakak, MLA for Iqaluit-Niaqunnguu, told the legislative assembly she thinks Nunavut’s Lotteries Act is out of date and should be reviewed.

On March 2, Family Services Minister Elisapee Sheutiapik told the assembly that her department is reviewing regulations that cause income assistance clients to have money clawed back when they win a bingo game or lottery.

And on Feb. 24, Justice Minister Jeannie Ehaloak announced a new initiative between Nunavut and Algonquin College in Ottawa to train Inuit correctional caseworkers.

“We want to ensure that the future of our system includes individuals who believe in Inuit societal values as the basis of our justice system,” Ehaloak told the assembly.

On Feb. 27, Community and Government Services Minister Lorne Kusugak told the assembly he had signed off on official changes to the names of two Nunavut communities. Hall Beach officially changed back to its traditional name, Sanirajak, while Cape Dorset officially reclaimed Kinngait.

On March 3, Lorne Kusugak, in his role as human resources minister, released the GN’s detailed plans for increasing Inuit employment across all its departments and agencies.

The sitting also saw a difficult day on March 5 when MLAs rose one by one to speak in the legislature on a motion to end violence in the territory, which passed unanimously.

Elisapee Sheutiapik, minister of family services and status of women, tabled the motion for a “violence-free Nunavut.”

“There’s a point in time where we have to stand united and that gives people hope. This kind of messaging gives people hope that we care as leaders,” Sheutiapik said in the legislature on March 5.

The government also announced it will build four new shelters for women fleeing violence in the territory. Gjoa Haven, Pond Inlet, Baker Lake and Pangnirtung would see facilities built in 2022-23.

In addition to hours of ministers’ statements and questions from MLAs, the sitting also saw long hours spent in committee of the whole, where MLAs went through each department’s operating budget for 2020-21 line by line.

The following bills were given royal assent:

Although Bill 25, an Act to Amend the Education Act and Inuit Language Protection Act, was expected to be discussed this sitting in committee of the whole, John Main, MLA for Arviat North-Whale Cove, brought forward a motion asking for more time for the standing committee to complete its work on the bill.

The next sitting of the legislative assembly begins on May 26.