Despite COVID-19 challenges, Agnico Eagle says it’s in Nunavut for the long term

“We need to build strong partnerships” 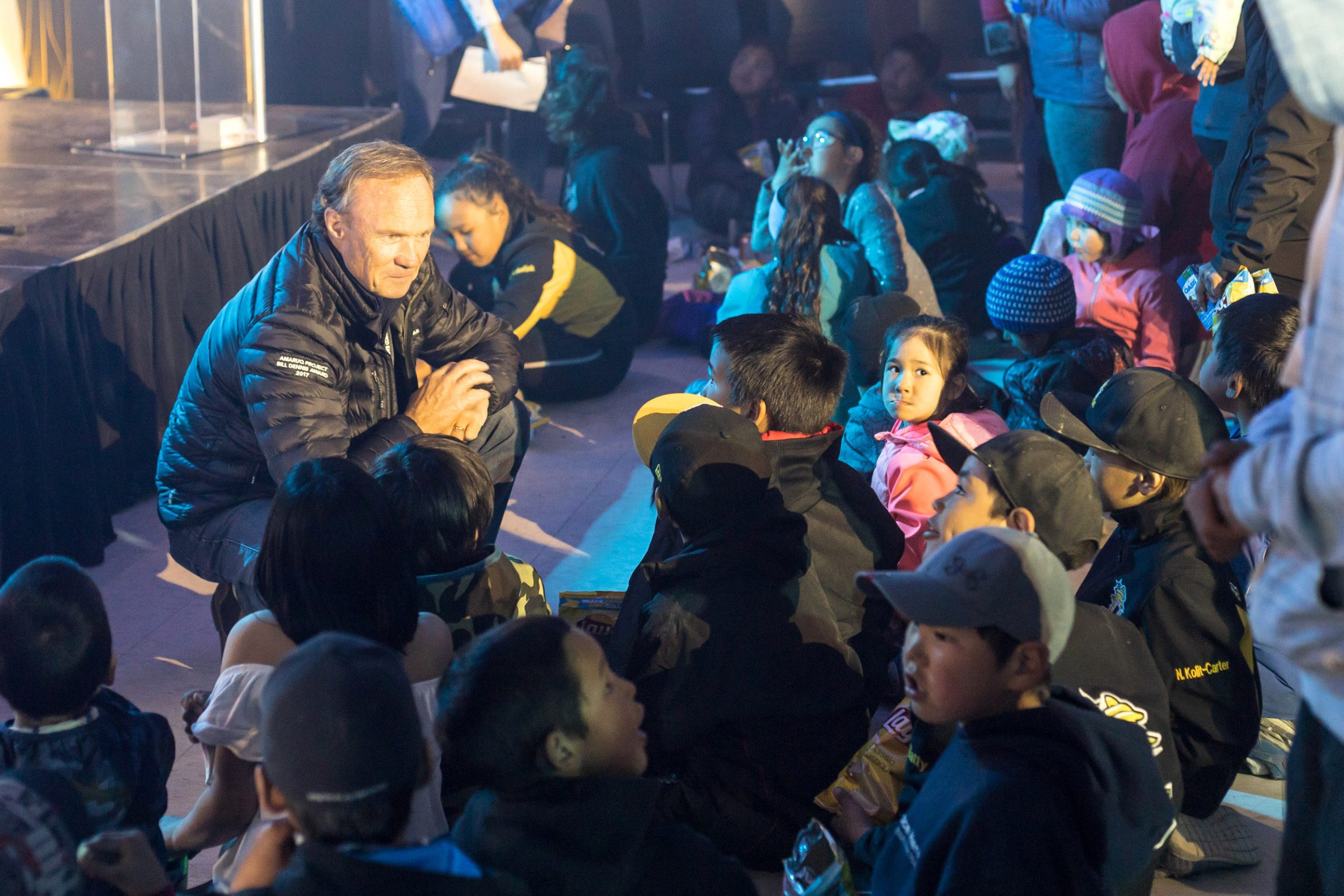 Sean Boyd, the vice-chair and CEO of Agnico Eagle Mines Ltd, talks to children at the 2019 opening of its Meliadine gold mine near Rankin Inlet. Speaking at the Canadian Mining Symposium, Boyd said COVID-19 brought many challenges as well as some opportunities to the company. (Photo courtesy of Agnico Eagle)

The vice-chair and CEO of Agnico Eagle Mines Ltd., which operates two gold mines in Nunavut, says Canadian companies are best positioned to manage mines in the territory, where partnerships with communities are key.

Sean Boyd, speaking on Tuesday, June 16, at an online keynote session at the Canadian Mining Symposium, was referring to the proposed buyout of TMAC Resources Inc.’s Hope Bay mine in western Nunavut by the Chinese state-owned Shandong Gold Mining Co. Ltd.

“We think that should be done by Canadian companies run by Canadians, based in Canada, because we have the understanding of history and we have that sense of pride in the country and that willingness to see people benefit from that opportunity,” Boyd said.

On June 26, TMAC shareholders will vote in a special meeting on the buyout, which, if accepted, must then pass the scrutiny of regulators in Canada and China.

“We’ll leave it to the government and the Inuit associations that this is the type of structure they are comfortable with,” Boyd said.

But he said that if the government decides that the project is not in the best interests of the country, “that doesn’t mean, based on what we know about Nunavut, that that project is dead.”

Hope Bay then will just have to be rethought out, he said.

Boyd gave no indication that Agnico Eagle is ready to jump into buying another gold mine.

Agnico Eagle has had its hands full dealing with COVID-19, which, over the last three months, has led to reduced capacity at seven of the company’s eight mines, including its two gold mines in Nunavut, the Meliadine mine near Rankin Inlet and the Meadowbank complex near Baker Lake.

The complexity and the speed with which decisions were being made, along with the pace of change, increased the challenges of dealing with the pandemic, Boyd said.

One challenge that Boyd didn’t mention was how worries among Nunavut residents about the spread of COVID-19 from the company’s southern miners sparked a blockade of the access road from Rankin Inlet to Meliadine in March.

The company was also recently dealt a delay by Nunavut regulators to its plans to manage effluent disposal from that mine in 2020.

Boyd said Agnico Eagle is still looking to finish 2020 with production levels close to those of last year.

Although hard economic times lie ahead for nearly every industry due to the pandemic, “the gold business should have some of its best relative performance compared to other industries,” he said, because gold is a more secure investment at the moment.

That’s good news for Agnico Eagle and Nunavut, where gold mines add millions of dollars to the territory’s economy in jobs, taxes and other spinoffs: mining turned Nunavut into Canada’s leader in economic growth in 2018 and produced double-digit economic growth in Nunavut in 2019.

Agnico Eagle aims to have good financial results at year-end, Boyd said, even after what it he described as the “most challenging time” due to COVID-19.

“It’s going to take a while to get things back in shape,” he said, adding that he doesn’t expect to see a vaccine for COVID-19 anytime soon.

Agnico Eagle had more capacity than some governments at the beginning of the pandemic, Boyd said, and was testing for COVID-19 before many other industries at the Meliadine mine, with a new test developed by Laval University.

“We were able to layer on that extra level of comfort and protection for our workers as they returned to work,” Boyd said.

Now plans include expanded testing en route to the mines. This will see mobile COVID-19 tests before departure in Montreal and in Val d’Or for those workers heading to Nunavut, to prevent the introduction of the virus into the territory.

“They will be tested by the time they land in Nunavut,” he said. “Assuming they’re negative, they can embark on their rotation knowing that they are virus-free.”

Overall, Boyd said the pandemic was a learning experience for Agnico Eagle, “to slow things down because things were moving so quickly.”

“We saw it as an opportunity. We knew we would get through this,” he said.

The pandemic also gave the company an opportunity to take care of its employees and communities, he said.

Agnico Eagle sent home its Nunavut-based workers with a base pay, which continues until June 20, and has also provided donations to improve food security in communities near its mine.

Asked why Agnico Eagle has managed to do well so far in Nunavut, Boyd noted the territory lacks infrastructure, money for training, communications, and clean energy, but it’s still a safe and geologically good jurisdiction to work in.

And “we understand our role,” Boyd said. “We’re visitors on someone else’s land. We bring expertise, we bring capital, which means we have to work hard at a partnership, and that’s the only way you’re going to be successful.

“Like the people of Nunavut, we think long-term as a company, and I think there’s a good match. We know we need to be patient to see that value realized and we need to build strong partnerships.”