“A vote for me is a vote for Nunavut,” says Nunavut’s Liberal candidate 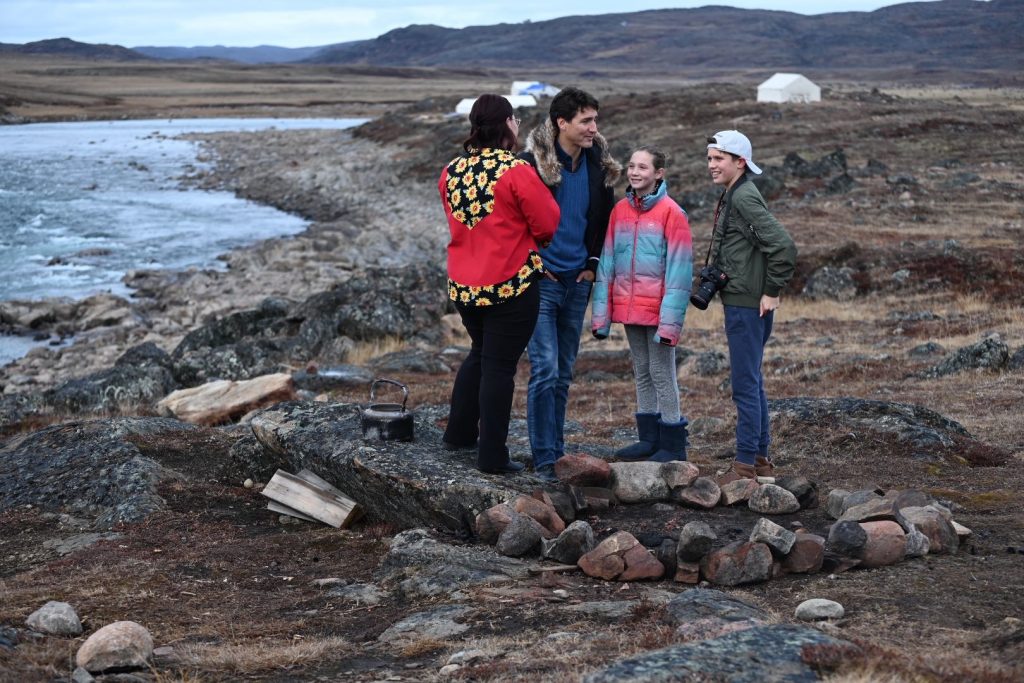 With the rolling Sylvia Grinnell River as his backdrop, Liberal leader Justin Trudeau made a brief campaign stop in Iqaluit today.

He wore a handmade parka with his party’s name embroidered in bright red—the same parka he wore in Iqaluit in 2015—and spoke about his plan to protect the environment and fight climate change.

“Canada is warming at twice the global rate. The North is heating up at three times the global average. That means unpredictable and dangerous ice conditions for harvesters. It means disrupted Arctic ecosystems. It means species extinction,” he said to a pool of media and campaign staff who had just flown up from Ottawa that morning.

Trudeau said if re-elected, his party would go even “further to protect the environment” by conserving more land and more water.

“It’s the most challenging issue of our time that Canadians are going to make a choice on,” he said.

Trudeau last visited Iqaluit in August, as part of a trip that also saw him visit Arctic Bay, for announcements on marine protection and housing in the territory.

Today’s visit did not include any new announcements from the Liberal leader. Instead, it focused on his party’s campaign promises to fight climate change.

One of those promises is to get all of Nunavut’s communities off diesel by 2030.

Standing behind a small podium positioned carefully on the rocky tundra, Trudeau fielded questions from his press pool that mostly focused on last night’s English leaders debate in Gatineau, Que.

But when asked about his plans for green housing initiatives in Nunavut and his promise to get the North off diesel by 2030, Trudeau did not specifically answer, but said the Liberals have been committed to investing in the North over the last four years and will continue to do so.

“We will be part of the fight to invest more and both mitigate against climate change and grow opportunities for future generations,” he said.

“One of the commitments in our platform on top of further investments in Nutrition North is to increase the northern travel allowance,” he said.

“Northerners still face unacceptably high prices for basic necessities. And we will do more,” he added.

Nutrition North, introduced under the Harper government in 2011, was criticized in a report released earlier this year by the Canadian Medical Association Journal.

In Dec. 2018, the Liberals announced increases to existing subsidies on certain items like milk and infant formula by 25 per cent, as well as a new harvesters support program.

Trudeau, joined by his two oldest children, also visited the elders’ qammaq to speak with residents and met briefly with Grade 10 students from Inuksuk High School.

Trudeau was also joined throughout his visit by Megan Pizzo-Lyall, Nunavut’s Liberal candidate.

For Pizzo-Lyall, fighting climate change is top of mind.

“It’s not going to be easy. And it is an ambitious plan. But we’re going to work towards this in the next four years,” she said.

“I’ve been an advocate for [the] environment and I am an avid hunter and enjoyer of our environment. A lot of us enjoy being in Nunavut because of our scenery, our culture. So it means a lot to me to preserve and promote our environment. Especially for our future generations.”

When asked what she would say to undecided voters in Nunavut, Pizzo-Lyall said she believes a Liberal government will continue to push forward on important issues like climate change.

“To me, there shouldn’t be any other option. We have a great platform and we want to keep moving forward. Not just with the Liberal party alone, but in partnership with the Government of Nunavut, with the Inuit regional organizations,” she said.

“A vote for me is a vote for Nunavut.”