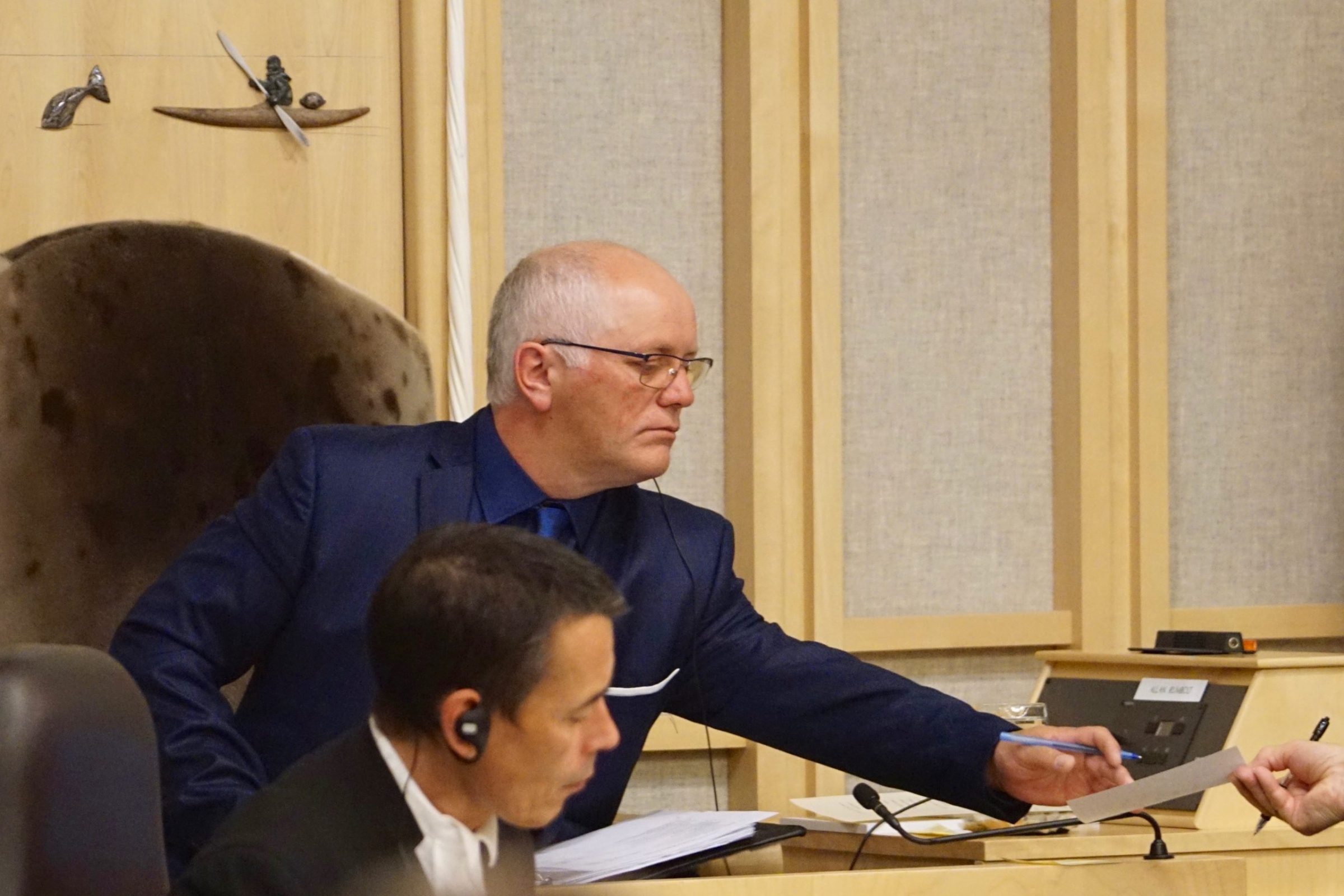 After representing Hudson Bay for over a decade and serving as the Speaker of the house in the most recent session, Allan Rumbolt announced he won’t seek re-election in the next general election. (Photo by Mélanie Ritchot)

The group of former MLAs passed some bills, scrapped others, and each announced whether they will run again in the upcoming territorial election on Oct. 25.

Premier Joe Savikataaq said he will be seeking re-election to represent the riding of Arviat South again.

“My cabinet colleagues and I are proud of the work that has been achieved since 2018, despite the challenges we have faced,” Savikataaq said, citing Nunavut having the highest minimum wage in Canada at $16 an hour, the territory’s new Mental Health Act and new health centres opening in Sanikiluaq and Kinngait.

Savikataaq listed other accomplishments, including bringing 240 Inuit into Government of Nunavut jobs, having nearly 200 housing units slated to be built this year and opening the new Aaqqigiarvik Correctional Healing Facility.

Savikataaq is one of 17 MLAs who announced they plan to seek re-election once the writ drops and the territorial election kicks off on Monday — coincidentally, the same day as the federal election.

Allan Rumbolt, who has represented Hudson Bay for 13 years, announced he will not run again.

“It was an emotional day for me,” he wrote in a tweet following his farewell speech.

“It’s time for someone with fresh ideas and new energy to keep working for the people of Sanikiluaq.”

Pauloosie Keyootak, the MLA for Uqqummiut, also said he is not seeking re-election.

Elisapee Sheutiapik, the minister of family services, announced she will not seek re-election Sept. 9, citing personal and family-related reasons.

Pat Angnakak, the former MLA for Iqaluit-Niaqunnguu, resigned in August to run in the federal election with the Liberal party.

Paul Quassa, former Speaker of the house and MLA for Aggu, resigned around the same time, saying it was time for someone living in the riding to occupy the position.

At the last sitting on Thursday, members were able to pass three of seven pending bills before time was up.

Bill 55, the Act to Amend the Property Assessment and Taxation Act, passed, despite criticism from Nunavut Tunngavik Inc. and other Inuit organizations.

The amendments change how the government collects taxes from mining operations in the territory. NTI and other regional Inuit organizations will challenge the new law in court, according to a news release.

Bill 77, a supplementary appropriation, and Bill 75, an amendment to the Summary Conviction Procedures Act, also passed, both making small changes to law that already existed.

The proposed Liquor Tax Act, Bill 56 — which would have introduced a tax on liquor sold in Nunavut or imported into the territory through a permit — did not pass.

Nunavut is currently the only jurisdiction in the country that doesn’t tax alcohol directly or through other means, like HST or PST.

John Main, the chairperson of the committee on bills and other matters, said one of the biggest concerns with the bill was it said the tax rates would be chosen by the department and minister of finance and wouldn’t have to be approved by MLAs, as payroll and income tax rates are.

While members of the committee voted against the bill, Main noted they recognize organizations like the World Health Organization say a tax is highly effective in reducing alcohol consumption.

Main said the committee encourages the next government to reintroduce this type of tax bill in the next assembly.

The new division would have replaced the current petroleum products division of the Department of Community and Government Services — which MLA Adam Arreak Lightstone called “shrouded in mystery” in March when MLAs decried a lack of transparency.

Main explained Bill 52 did not pass because there was a lack of clarity on how the new division would operate, how MLAs would be able to exercise oversight of it, and how it would be accountable for environmental liabilities.

The two other bills not passed proposed changes to the Revolving Funds Act — which affects fuel prices— and the Northern Employee Benefits and Services Pension Plan Act.

The fifth legislative assembly will officially dissolve on Sunday, with the election writ dropping on Monday, officially kicking off the territorial election campaign on the same day Nunavummiut will cast their votes in the federal election.

Nunavut residents who are going to run for MLA in the coming election must declare their candidacy between Sept. 20 and 24.

A candidate can run to represent any of the 22 constituencies in Nunavut, regardless of where they live, as long as they live in the territory.

The general election will take place on Oct. 25.