Spring sitting cancelled because of COVID-19 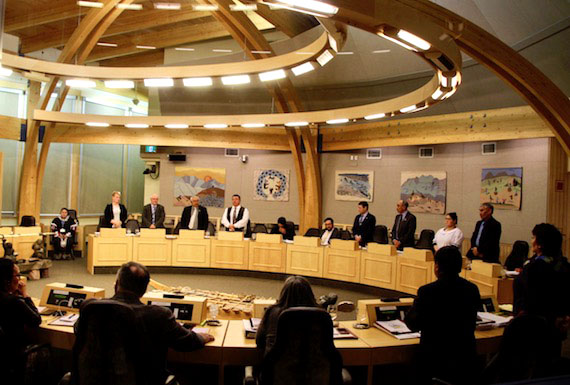 The spring sitting of Nunavut’s legislative assembly was supposed to run from May 26 until June 4. Instead, there will be a short sitting in September, and the regularly scheduled fall sitting will start on Oct. 20. (File photo)

Today, May 26, would have been the start of the spring sitting of Nunavut’s legislative assembly, if it weren’t for COVID-19.

It would have run until June 4. Instead, the plan is to have a shorter sitting in September, and then the house will reconvene for the regularly scheduled fall sitting from Oct. 20 to Nov. 5.

Paul Quassa, Speaker of the house, isn’t worried that the business of governing the territory has been slowed down.

“I don’t have any concerns at all,” he said, speaking over the phone in Iqaluit, “because of this pandemic, it’s just a delay, business will eventually have to be done.”

The decision to cancel the spring sitting was unanimous, Quassa said. After it seemed that there was a positive case of COVID-19 in Pond Inlet, he cancelled the sitting, saying that MLAs have to follow the same travel restrictions and social distancing rules as everyone else.

Even after that case was determined to be a false positive, he said postponing the sitting was the right move.

These will go before the house in the fall sitting, Quassa said.

During the winter sitting, from Feb. 18 to March 12, members of the legislative assembly approved the 2020-21 capital budget.

That gave the government some breathing room to spend money on expenses that cropped up due to the pandemic.

In addition, cabinet issued three special warrants—$5.8 million that went to subsidizing Calm Air and Canadian North for the month of April, and “a little over one million” on school food programs, according to Finance Minister George Hickes.

During the sitting in September, MLAs will retroactively approve those special warrants, Quassa said.

John Main, MLA for Arviat North–Whale Cove and chair of the regular members’ caucus, is pleased with how the GN has spent money to respond to COVID-19.

“I lean towards being a big spender when it comes to health care in Nunavut,” he said over the phone from Arviat.

Regarding the cost of creating places for Nunavummiut to go into isolation for 14 days in hotels in four cities—Edmonton, Yellowknife, Winnipeg and Ottawa—Main said there will be questions about that when he sees it broken down in a supplementary appropriation bill when the house sits in September.

“I don’t have the bill in front of me,” he said, “so I really can’t say it was too much, was it spent properly, was it properly accounted for.”

But he did say creating those isolations hubs would have been tough to pull off, and it was the right decision.

“Our government has made the most out of our geographical location, the fact that we’re not connected to Canada by road,” he said.

Main also thinks it was the right decision to postpone the spring sitting, especially since the budget was approved, so the GN’s hands weren’t tied by financial restraints when responding to the pandemic.

Overall, he thinks cabinet ministers have done a good job in responding to the pandemic, despite “a few hiccups,” including teacher travel and school closures that came up in April, he said.

Looking ahead to the regular fall sitting

Main misses the regular business of being a politician.

“As a politician I really enjoy my job, and going to the sittings is part of that,” he said.

He has felt cut off from his constituents during the pandemic lockdown, unable to travel to Whale Cove as he normally would, unable to meet with people, or even shake hands.

He is communicating with constituents by phone and email, and said that the majority of things he’s hearing about are related to COVID-19.

“I really can’t wait to get back to business,” he said. 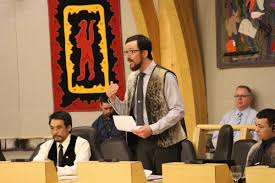 John Main is the MLA for Arviat North–Whale Cove, and he’s the chair of the regular members’ caucus. Main said it was the right choice to cancel the spring sitting, which would have started on May 26 and run until June 4, but that he can’t wait to get back to the house in September. (File photo)

It’s “hard to think about” issues unrelated to COVID-19, but when MLAs get back to their regular agenda in the fall sitting, Main said he will be back to raising the same issues he has since he was elected.

“As somebody who’s somewhat familiar … [with] the underlying conditions of the compounding factors in Nunavut, COVID is absolutely terrifying,” Main said.

By compounding factors, he means the housing shortage and lack of medical infrastructure.

“We’re just a pile of tinder waiting for a spark to hit,” Main said.

Despite that, he said he sees some “silver linings” related to policies that have come out of the GN’s response to the pandemic.

For example, the focus on food security—the first thing the GN did was give money to hunting and trapping organizations in the territory, and Inuit organizations did the same. There are also breakfast and lunch programs running in communities across Nunavut.

“I would be really pleased if we continue to have the conversation and figure out how to get more kids fed, get people living healthier lives,” he said.

Another positive, in his mind, is that the GN was subsidizing airlines in April, and is now in talks with the federal government to find out how to continue that through the pandemic.

“I don’t think ‘subsidy’ should be a dirty word when it comes to airlines in the North,” he said, saying he wants the conversation to continue with “our federal partners” to keep money flowing to airlines.

Another positive is the awareness of public health, and how the GN has allowed Dr. Michael Patterson, the chief public health officer, to take the lead on decisions.

Diseases spreading from household to household is something that “Nunavut’s been dealing with for decades,” he said.

“If this comes to help us down the road in terms of helping battling tuberculosis, RSV in infants, or anything else, that could be beneficial,” he said.

Coming up before the September sitting

If there was an emergency need of special funds, or if there was a “special bill that needed to be done … we can have a one day or two day sitting of the ledge, for emergency purposes,” before September, Quassa said.

In the meantime, Kugluktuk and Baker Lake each have to hold byelections on Aug. 24 before the September sitting.

The Baker Lake byelection is to fill the seat vacated in February by Simeon Mikkungwak, who served as Baker Lake’s MLA and as Speaker of the house.

The Kugluktuk byelection is to fill the seat vacated by Kugluktuk MLA Mila Kamingoak at the beginning of April.