“It’s been a lot of hard work, a lot of stress and a lot of spending money” 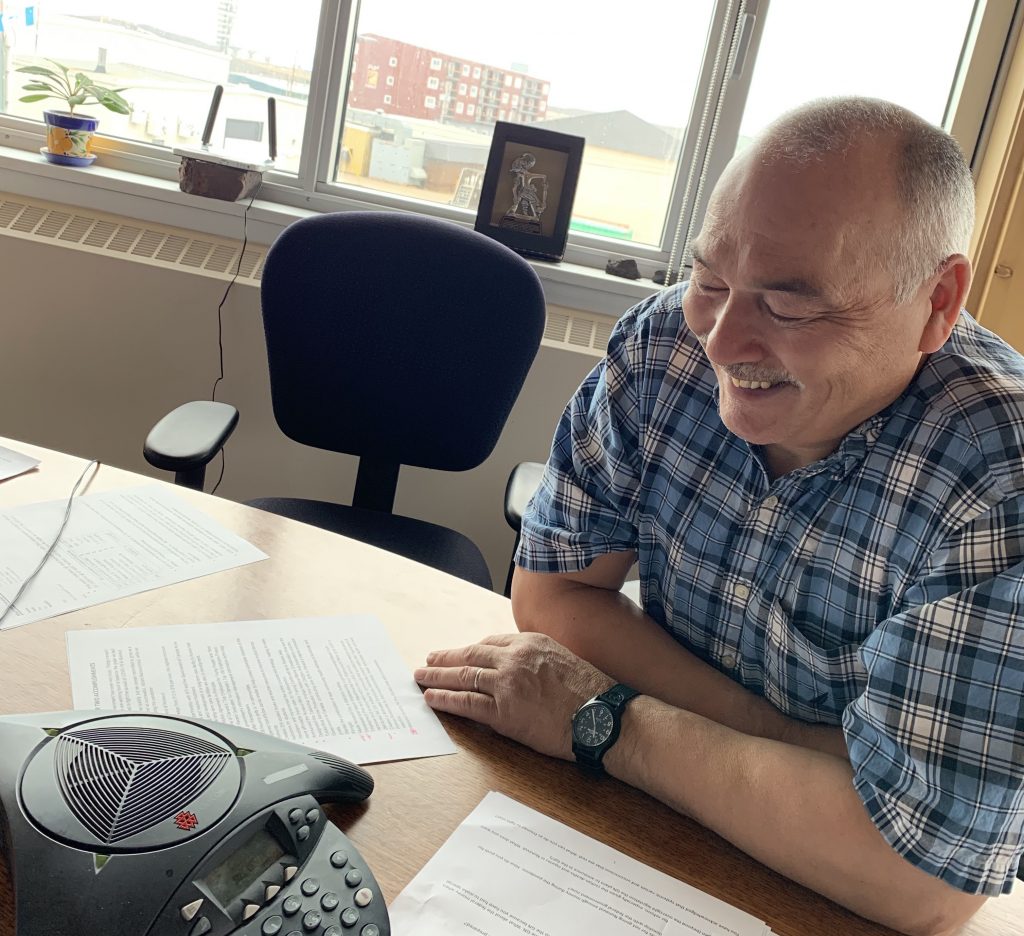 Premier Joe Savikataaq speaks to Nunatsiaq News from his office last week about his second year as Nunavut’s premier, with the past few months largely dominated by the COVID-19 pandemic. (Photo courtesy of the Government of Nunavut)

Two years into his tenure as Nunavut’s premier, Joe Savikataaq says that dealing with the COVID-19 state of emergency has proven by far to be his most demanding challenge.

Work, stress, money and effort define the past three and a half months, said Savikataaq in a recent interview with Nunatsiaq News about his second year leading Nunavut.

Over the past 12 months, Savikataaq has navigated through two major crises: first, the ransomware attack that knocked out the government’s communication network in November, and then the COVID-19 pandemic response in the territory, which remains under a state of emergency.

“Even though we’ve had no cases here, it’s been a lot of hard work, a lot of stress and a lot of spending money that we’ve done to keep Nunavut COVID-free and help people out during this unprecedented time,” he said. “We’ve never gone through anything like this.”

Savikataaq said he never even imagined that he would have to deal with a pandemic.

“Whenever we hear about a pandemic, it’s always in another country, far away, not in Canada. We’re lucky to have kept it out of Nunavut. But it’s been hard work, and a costly effort,” said Savikataaq, making a point of thanking his chief public health officer, Dr. Michael Patterson, for his guidance during the pandemic.

Nunavut has only seen one false-positive case of COVID-19 to date.

To support public health measures to keep COVID-19 out of the territory, Savikataaq has participated in Government of Nunavut news conferences on COVID-19 up to five times a week with Patterson and other ministers.

Early on, he helped demonstrate social distancing in a social media post. 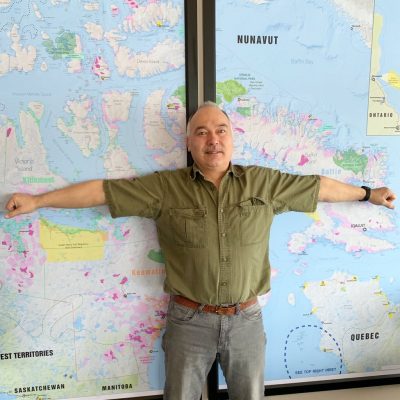 “What is social distancing? For Nunavummiut, it means some tough choices-not kuniking, not hugging Elders, not shaking hands, not pre-chewing food for babies and toddlers, staying away from community events and staying home if you don’t feel well,” said Premier Joe Savikataaq in a social media message on March 17. (Photo from Twitter)

A demanding year for the GN

Nunavut’s debt cap recently rose to $750 million, which will allow the GN to take on larger infrastructure projects, Savikataaq said.

But Savikataaq is still looking for more support for Nunavut’s immediate needs.

In April, Savikataaq was frustrated when he felt federal funding for COVID-19 left the GN “shortchanged.”

“Nunavut needs more, and we need it now,” he said then.

Nunavut has spent $30.8 million related to the pandemic, plus up to $5 million for air services, and continues to spend more.

Describing his relations with federal government now as “good,” Savikataaq said they’re in negotiations for more money to help with the GN’s biggest ongoing expense: subsidizing airlines and isolation hubs.

The current funding arrangement is not sustainable, he said. With Ottawa chipping in $5 million and the GN $25 million until the end of June, “it’s quite lopsided,” he said.

“As long as the borders are closed, and travel restricted, unless we help out the airlines, there won’t be any airlines left,” Savikataaq said. “We need the airlines. We have no roads.”

Not just about COVID-19

Savikataaq said he could list many achievements of his government during the past year—although these have not always been noticed because of COVID-19, he said.

Some big GN projects will be delayed due to COVID-19-related construction issues, and tenders will have to be revised because of new pandemic-related changes, as is the case with the elders’ facility in Rankin Inlet, he said.

But, beyond dealing with COVID-19 and its challenges, here’s what Savikataaq would like Nunavummiut to remember about his government over the past year.

There’s the promised mine training centre for Rankin Inlet, 108 new public housing units built in 14 communities, the inclusion of Nunavut Day as statutory holiday, the GN Inuit employment plan, a minimum wage increase to $16 an hour, and the planned recovery and trauma centre.

Savikataaq said the GN is waiting for the federal treasury board to approve the money to move ahead on that centre, which will entail about $73 million for capital costs alone.

Work on eliminating tuberculosis is also ongoing, but, again, it’s not in the headlines like COVID-19, he said.

Then, there was November’s ransomware attack that crippled the GN’s computer systems.

“We completely rebuilt after the ransomware,” Savikataaq said. “I am so thankful that the ransomware and COVID didn’t come at the same time.”

Working against racism and bias

While dealing with the pandemic, Savikataaq has also taken on big issues such as systemic racism and bias in the GN.

“Systemic racism and unconscious bias are real—painfully real,” he said in a statement earlier this month. “On behalf of our cabinet and the entire government, please know we will continue to fight against it. We stand together, and we stand united to make the world better.”

“We’re all hurting right now. The death of George Floyd in the U.S. and the movement we’re seeing in response across the world. But also right here in Nunavut, with the video from Kinngait.”

The GN is working on an action plan to combat racism and bias, as well as discussing how to equip the RCMP with body cams, he said.

As we celebrate Pride Month differently during #COVID19, let’s all honour the simple fact love is love, and it is beautiful. pic.twitter.com/p642gZViNq

There have been some bumps, such as when Savikataaq suggested that teachers who weren’t happy in Nunavut could be replaced with laid-off educators in Ontario, prompting angry criticism from the Nunavut Teachers’ Association.

Some saw his comments as a sign of tension between Inuit and non-Inuit in Nunavut or as a sign of a lack of respect for teachers.

But that was not the case, Savikataaq told Nunatsiaq News. It was never about Inuit and non-Inuit, he said, but more about his frustration with some teachers who had left the territory after schools closed due the pandemic.

“I did apologize and it was accepted. I spoke in the heat of the moment,” he said.

Savikataaq has been present at the news conferences, which he said continue to be important so people hear directly about issues from government and the media, rather than through hearsay.

Savikataaq said hunting and fishing are his favourite activities, although he has hardly taken any time off since March 11, when the World Health Organization declared the new coronavirus a pandemic: “It was hard: it was stressful when COVID was going on. I did not travel home. I was working for a very extended time.”

“Going out on the land is quite another experience. It clears my mind and takes me back to the nice spot in my brain, recharging it. I would just like to go home this summer for a short break,” he said.

But if there’s a COVID-19 case in Nunavut, “that will change everybody’s plans.”