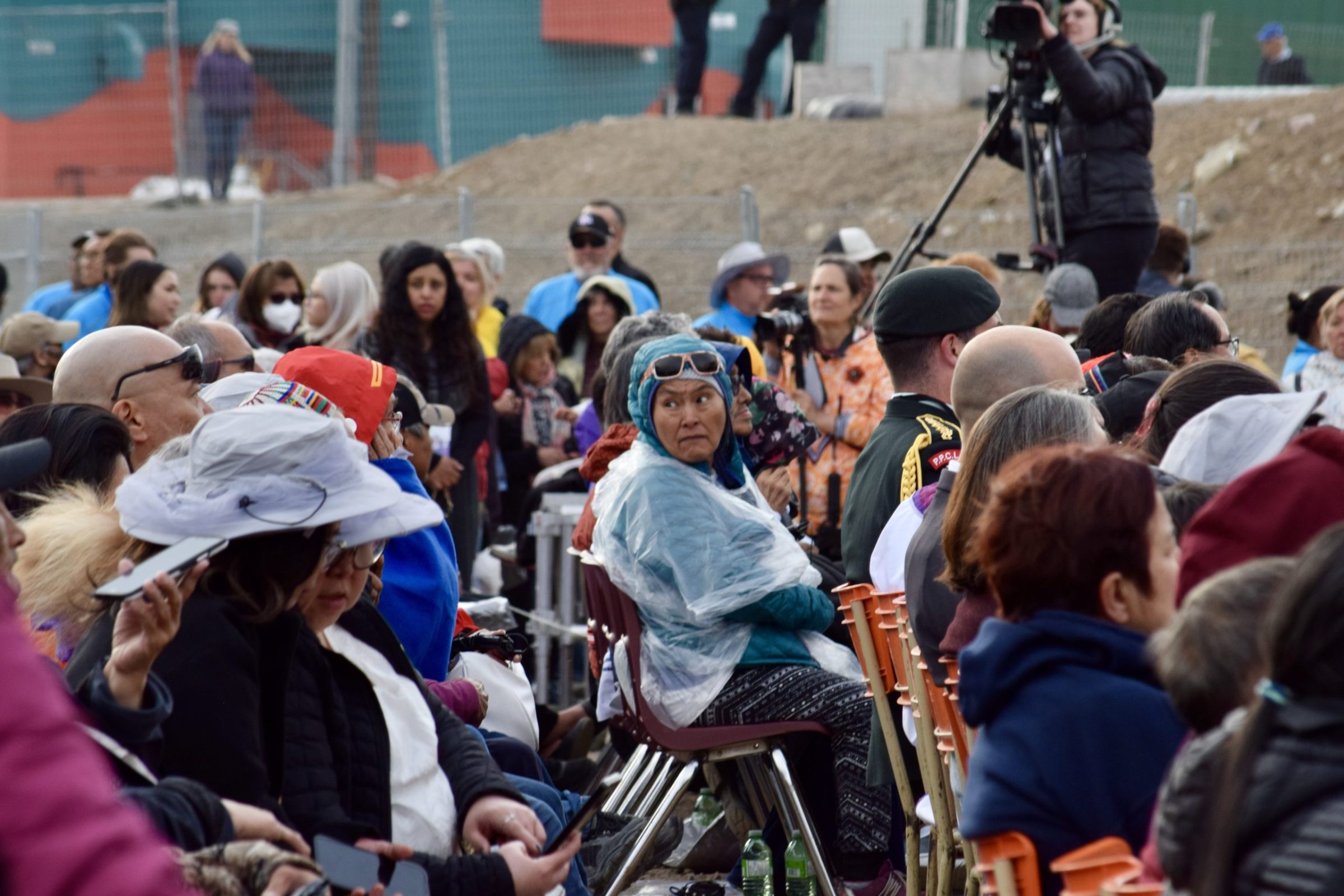 A crowd listens to Pope Francis deliver an apology to approximately 1,000 people in attendance in front of Nakusuk school. Pope Francis’ apology for the role that some Catholics played in residential school abuse is one of the top five stories Nunatsiaq News covered for the city of Iqaluit. (Photo by Madalyn Howitt)

Oil-contaminated water dominated Iqaluit’s headlines last year, but 2022 brought some fascinating stories of its own.

From a world leader coming to apologize for traumatic and long-lasting abuse against Indigenous people to the municipality securing important infrastructure funding for its future, Nunavut’s capital witnessed plenty of noteworthy events this year.

Here is our paper’s top five stories we covered for the city of Iqaluit.

Approximately 1,000 people gathered around Nakasuk Elementary School on July 29 to see Pope Francis apologize for the role that some Catholics played in the abuse of Indigenous children in the residential school system. 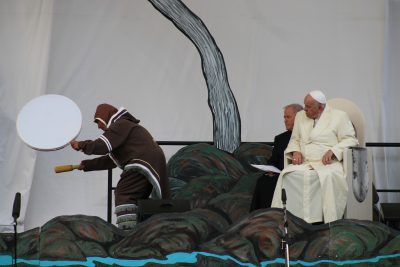 “I want to tell you how very sorry I am and to ask for forgiveness for the evil perpetrated by not just a few Catholics in these schools who contributed to the policies of cultural assimilation,” he said in Spanish.

His speech, which was translated into English and Inuktitut, was met with cheers, as well as some protest, from the crowd.

The visit was part of the Pope’s six-day tour of Canada.

Before meeting with the public, he met privately with 100 Inuit residential school survivors and apologized to them directly.

While the event took place in Iqaluit, Inuit throughout the territory and across the country were in attendance or watching the event.

City gets $214 million to solve its water woes

Iqaluit has been in need of new water infrastructure for years. Pipes have broken, emergencies have been called because water levels were too low and a lack of a reliable future water source has been a barrier to development.

But in April, a solution came in the announcement of $214 million in federal funding to upgrade the city’s water distribution system, through the Iqaluit Water Infrastructure Project.

“This is a game-changer for our city and the territory, as a whole,” then-mayor Kenny Bell said at a council meeting in April.

He oversaw the city of Iqaluit’s response when it was confirmed that oil had contaminated the city’s water supply, a development that affected the health of everybody in the community and attracted national attention.

As the world shut down from the COVID-19 pandemic during parts of the past nearly three years, Bell was mayor as the city introduced its own response. 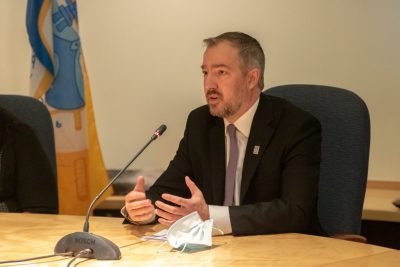 Kenny Bell resigned as mayor of Iqaluit on Oct. 18 this year. (File photo by Jeff Pelletier)

While oil contamination in the water was an emergency the city dealt with during Bell’s tenure, he was also mayor when the city secured $214 million in needed funding for water infrastructure.

Bell did not shy away from offering his opinions, communicating consistently and bluntly on social media platforms like Twitter.

It was that same platform where Bell announced his resignation on Oct. 18. That came after Bell travelled to Iceland to represent the city, on a trip paid for by the municipality.

He was to attend and speak at a conference. Bell did not attend or speak, and later repaid $9,500 to the city to cover the costs.

Solomon Awa, who had been deputy mayor, was appointed mayor by council to finish Bell’s term.

On Aug. 5, hours of planning paid off for the Amaruq Hunters and Trappers Association as the Iqaluit-based team harvested a bowhead whale near Hill Island.

“Look at those happy faces,” read a tweet from the Nunavut Wildlife Management Board, the organization responsible for conserving wildlife while respecting Inuit harvesting rights.

The skull of the whale will be displayed on a platform along with a plaque on a trail around Iqaluit, the city announced in September. The plaque will explain the significance of the hunt.

Kenny Bell was not the only person who left city council in 2022. A slew of councillors departed or were appointed at city hall for various reasons.

In April, Sheila Flaherty resigned from council to focus on her culinary company, Sijjakkut, as well as other Inuit and Indigenous-led projects.

That was followed by Joanasie Akumalik resigning in June after serving as a councillor for nearly 10 years.

Even before Flaherty and Akumalik resigned, the city was looking to appoint two new councillors to fill the spots of Janet Pitsiulaaq Brewster and John Fawcett, both of whom left in 2021.

By the end of the year, the city had appointed five councillors: Ookalik Curley and Paul Quassa in March, Kimberly Smith in June, Sam Tilley in October.

Then on Dec. 13, Swany Amarapala was appointed to city council to fill the spot left by Solomon Awa after he replaced Bell as mayor.

The next municipal election is October 2023.